Liberia: Sirleaf’s son back in jail, slapped with new charges 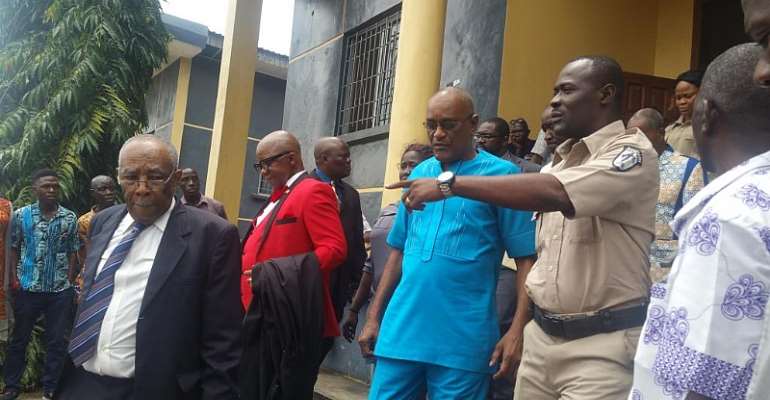 Charles E. Sirleaf, the son of former Liberian President Ellen Johnson Sirleaf, has been rearrested and jailed Wednesday at the Monrovia Central Prison, aka 'South Beach', in connection to the alleged unlawful printing of local currency worth millions of dollars that reportedly disappeared.

Initially, the five were slammed with economic sabotage, misuse of public money and criminal conspiracy, following a report looked into the alleged disappearance of more than $100 million worth of newly printed Liberian banknotes.

Sirleaf, a deputy governor of Liberia's Central Bank at the time of the alleged incident, is suspected of pocketing some of the proceeds from 2016 to 2018.

The five had appeared before Judge Blamo Dixon in Criminal Court “C” on Tuesday with team of defense lawyers to answer to charges economic sabotage when they were slapped with new indictments and writ of arrest from prosecutors.

According to court record seen by RFI, the state prosecutors have redrawn the previous indictments of economic sabotage, including criminal conspiracy, and have issued a new indictment: money laundering, a felony of the first degree; in violation of Liberia's New Panel law.

Sabotaging the Liberian economy
The new indictments indicate that during their service at the bank, the defendants knowingly, deliberately and intentionally colluded and conspired with intent to launder money and sabotage the Liberian economy, defrauding the government of Liberia when they allegedly printed excess local currency amounting to L$2,645,000,000 [11.7 million euros] without authorisation.

The US$35,367.72 was paid to co-defendant Crane Currency of Sweden as printing cost for the initial amount of money.

Though the request and approval for the printing of five billion in local currency was approved by the legislature on 17 May this year, Sirleaf had earlier entered into contract with co-defendants Crane Currency on 6 May 2016 to print the money, according to state prosecutors.

The contract amount for printing of five billion dollars in local currency came to US$5,210,000, the defendants reportedly paid US$5,611,469.58, an excess of US$401,469.58 for the printing of the surplus amount which cannot be accounted for by the defendants.

Sirleaf and his alleged associates will remain behind bars until their lawyers can file for bail to secure their release from further detention pending the conclusion of the case.

The case is slated to begin on Monday.