Mobility and Maginot Lines: China Hysteria Down Under 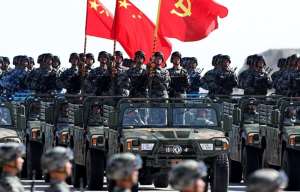 The blinkered security establishment is standard fare in politics. From Washington to Manila, we hear of terrors and concerns which tend to more spectral than not. Legitimate concerns such as catastrophic environmental failure, or a nuclear accident, are treated with a sigh, its warners doomsday advocates rather than reasoned citizens. It is the unseen demon that preoccupies.

One such blinkered devotee is Andrew Hastie, an Australian member of parliament who prides himself as something of a security sage. (Suffice to say that experience serving as a member of the Special Air Services Regiment does not necessarily qualify you as an expert in world politics.) He chairs the Parliamentary Joint Committee for Intelligence and Security, a grouping of parliamentarians that has done more harm to Australian civil liberties than most institutions. Lacking an inner cabinet role, he has the freedom to mouth some of his richer views, possibly with promptings from the Prime Minister, Scott Morrison. Best get the lowly man to do the damage if you want a view known widely.

Being no Sinophile, Hastie has deemed the People’s Republic of China the great Satan of international politics, something that will earn him a fan base in certain circles in the Washington cocktail set. In doing so, he reiterates fears of Yellow-Red horde coursing its way through Asia to the idyllic, peaceful antipodes. He scolds Australians for not appreciating the “ideology” of the Chinese Communist Party. This is the new domino effect, and like that haphazard assessment formulated during the Eisenhower years, it is equally unconvincing.

In The Age and The Sydney Morning Herald on Thursday, Hastie expressed an opinion dressed up in the language of urgency, an attempt to awaken a certain consciousness. In that sense, he is an options shop, hand-me-down George Kennan, who penned his famous Long Telegram as US chargé d’affaires in Moscow warning of the Soviet mindset. “At bottom of Kremlin’s neurotic view of world affairs is traditional and instinctive Russian sense of insecurity,” he noted.

Hastie makes no mention of Kennan, preferring, instead, the convenient findings of Stephen Kotkin of Princeton to disabuse those silly sods who thought that “Stalin’s decisions were the rational actions of a realist great power.” In Kotkin’s views, it turned out that the embroidering of Marxist terms through meetings, discussions and policies in the Kremlin were really due to one tendency: “the Communists were Communists!”

For Hastie, the planes finding their incendiary conclusion in the World Trade Centre in New York and the Pentagon did not supply the defining “geopolitical moment” of the 21st century. That dubious honour went to the colliding encounter between a J-8 fighter jet of the People’s Liberation Army Navy and a US Navy EP-3 signals intelligence aircraft off Hainan Island that same year. The PLAN pilot perished; the 24 crew of the EP-3 were subsequently held by the PRC for 11 days. The aircraft was duly stripped and examined, and returned in parts. “The Hainan Island incident laid down the contours for the present challenge facing Australia. It portended the agonising security and economic balancing act we must now perform.”

Hastie is less anthropological, and more reactionary than Kennan. “Right now,” writes Hastie, “our greatest vulnerability lies not in our infrastructure, but our thinking.” This is nothing less than an “intellectual failure” rendering Australia and other states “institutionally weak. If we don’t understand the challenge ahead for our civil society, in our parliaments, in our universities, in our private enterprises, in our charities – our little platoons – then choices will be made for us. Our sovereignty, our freedoms, will be diminished.” Strong language from a politician in the service of a country whose sovereignty has always been susceptible to modification, being an annex of Washington’s imperium.

What was needed, in the view of a worried Hastie, was for Australians to accept and duly respond “to the reality of the geopolitical struggle before us – its origins, its ideas and its implications for the Indo-Pacific region”. Australia found itself facing “every strategic and economic question […] refracted through the geopolitical competition of the US and the PRC.” The solution? Continue to trade with the PRC for reasons of prosperity, yet maintain a firm security posture against it.

Shaky historical comparisons make their way into the piece. Australia, he insisted, found itself in the same position as those French strategists worried about the rise of Nazi Germany. The “Maginot Line” built to protect France against Germany prior to the Second World War finds a modern equivalent in the theory that “economic liberalisation would naturally lead to democratisation in China.” The French failed against the German panzers; Australia has, in turn, “failed to see how mobile our authoritarian neighbour has become.”

The extrapolations are inevitable: the Munich analogy that corrupted so much thinking in US foreign policy, leading to defeat in Vietnam; the need to take steps to avert disaster and avoid appeasing authoritarianism. Many an idiotic policy has arisen from shonky historical analogies.

The Chinese response was curt, coming in a statement from the embassy. “We strongly deplore the Australian federal MP Andrew Hastie’s rhetoric on ‘China threat’ which lays bare his Cold War mentality and ideological bias.” Its assessment was conventional: there was a “world trend of peace, co-operation and development” that was undermined by such remarks.

Hastie has his glum faced backers unnerved by the “might is right” view of the world order, be it US President Donald Trump’s penchant for tearing up treaties, Russian disruptions, strong man popularity or disunity in Europe. Anne-Marie Brady, based at the University of Canterbury, defers to the MP’s wisdom, making the common mistake about a joint parliamentary committee that often sees haunting forms rather than substantive matters. That committee, after all, “helped pass the new counter-foreign interference legislation which will help address the Chinese Communist Party’s aggressive united front work activities in Australia”.

We have seen this in history: the hysterical prophet who insists on self-fulfilling prophecies. If you proclaim the end of the world is nigh, you might just get what you wish for. Terrifying your opponents, unsettling them into something rash, is the stuff historical blunders are made from. The march of history is not that of an orderly, planned sequence, but a messy stumble occasioned by blundering leaders. With individuals like Hastie, a reasoned balance will not be struck. Those in Washington will remain confident that they have Australia on their side in any future skirmish.