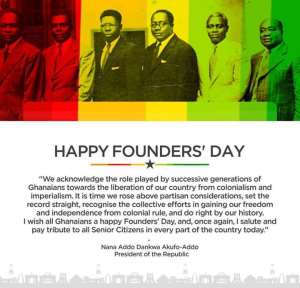 Ghanaians across the country and the world are observing the 2019 edition of Founders’ Day.

With this year’s edition falling on Sunday, tomorrow Monday will be observed as a holiday, according to a public notice issued by the Ministry of Interior.

Prior to the passing of the Public Holiday Amendment Bill into law in March 2019, September 21st which is the birthday of Ghana’s first democratically-elected, Dr. Kwame Nkrumah, was regarded as the Founder’s Day.

Background To Founders’ Day Celebration
It would be recalled that in 1874, Great Britain colonized Ghana then referred to as the Gold Coast.

But after Britain was weakened by World War II, there was a rising desire for independence, with Ghana becoming the first sub-Saharan African country to gain independence, on 6 March 1957.

President Nana Akufo-Addo in a message to the nation on Sunday, August 4th, said “we acknowledge the role played by successive generations of Ghanaians towards the liberation of our country from colonization and imperialism.”

He urged that “it is time we rose above partisan considerations, set the record straight, recognise the collective efforts in gaining our freedom and independence from colonial rule and do right by our history.”

The President paid tribute to all senior citizens across Ghana.