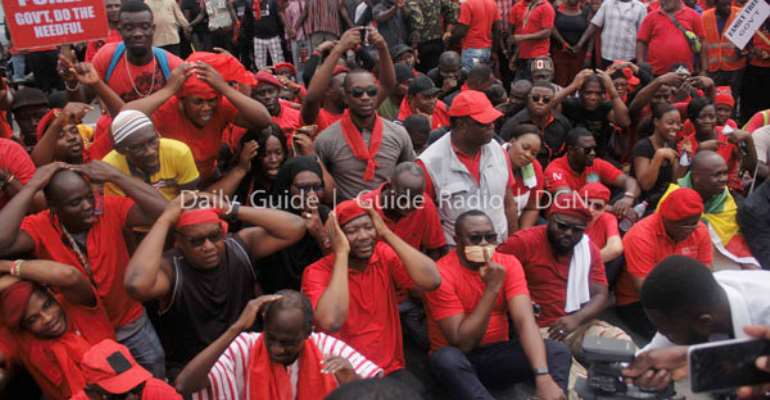 Fast-backwards: 11th May, 1995, NPP members and sympathizers staged the Kume Preko demonstration. Leading the group was Nana Akufo Addo and of course, Wereko Brobbey a.k.a. Tarzan, Dr. Nyaho-Tamakloe, Kwesi Pratt and Kweku Baako. The colour of their T-Shirts was mostly white, and they were protesting the high cost of living, exacerbated by the introduction of VAT. “Kume Preko” is loosely translated as “Kill me (and satisfy yourself)” OR “I'm ready to die now” Or “I'm fed up with your threats, so now kill me”. It is said that the organizers were members of the 'Alliance for Change, an umbrella organization of groups opposed to President Rawlings.

As the marching proceeded, some people who were identified as ACDRs started shooting at the protestors. Conservatively, four people died and over 40 people got injured. One wounded Yaw Atta recalls the ordeal: “…Out of panic, I tried the last resort of calling and signaling to him (my brother) to come over to my 'safe haven'. Before I was through, blood was dripping from my jeans. I fell backwards, but hemmed in by the ACDR men who were shooting indiscriminately at this time, my brother could not cross over to pick me up.”

Abdulai Rahman Osmanu, a cargo truck driver was shot in the head at Rawlings's Park. He had just arrived from Kumasi, and fell into the crowd when going to deliver a message. He narrated his story: “At the Rawlings's Park I suddenly felt a sharp pain in my head. Then I fell on my face. Afterwards, I woke up in hospital”. A 'stray bullet' hit a 14-year-old boy. He died instantly.

The ACDRs were the masters on the ground that day. They grabbed one boy and shaved his head with a broken bottle. The ACDRs enjoyed the sight of the boy crying out loud, with blood all over his body. The VAT was suspended for two years:

The demonstration by the NDC, reportedly organized by the Coalition for Social Justice was different. The police were around to ensure that nothing went awry. The mission of the demonstrators was to protest what they believe to be “hardship” in the country. To them, the nation was passing through “difficult economic times”.

John Mahama who is seeking a come-back to the highest office, wrote in his 'Facebook': “Our country is on the downward trend, with an unbearable increase in the cost of living; the citizenry doesn't feel safe and yet Government continues to oppress and intimidate people, including journalists… There is a pent-up anger among Ghanaians, and it's beginning to manifest even among the security services… It is in our country's interest that we speak out and demonstrate our disapproval of the Akufo-Addo style of leadership, which has visited unprecedented hardships on Ghanaians.”

The T-Shirts for this demonstration were mostly red-showing that “their eyes were red.” Chairman Ofosu Ampofo and Asiedu Nketia joined the other protestors to sit on the ground, to cry and wail: “{kum de yen” (we are hungry); “y'adwuma regu” (our companies are collapsing); “y'awarea regu” (our marriages are collapsing). Beautiful Hannah Bissiw, the National Women's Organizer of the NDC stated: “We're protesting against the hardship, the insecurity in our country, the thievery in our country, the corruption in our country, the cluelessness of the government… Now, when we say the President is corrupt, you guys (media) say it's an allegation… I want to remind you that per the President's stolen speech at his inauguration day, we should be citizens and not spectators. So, the media stop the 'fear fear' things. This is a corrupt government, this is a wicked government and this is a mean government, that's why taxes are high… Today, markets are collapsing; today the education system is down, the security in this country is no more…”

To her, the masses are suffering, the One village, One Dam is leading to people drowning, and all jobs, including that of Kayayee, are collapsing. Bede Zeiding claimed that teachers, galamseyers, traders are all complaining. Sam George gave a warning to the security agencies that they were ready to face them.

Ofosu Ampofo, NDC Chairman had his lips plastered and his index finger put on the plastered lips. But when he wiped off the plaster, he gave vent to his feelings. He expected the Akufo-Addo led government to own up its failure in government, and give way to a more competent government to rule if they are overwhelmed. The government failed to fulfill its campaign promises, including that of fixing 'dumsor'. He complained: “Nana Addo is not showing any interest and sensitivity to the people of this country. He promised that he would protect the purse of this country and let us see the reckless spending that is going on. He is gallivanting all around chartering aircraft when for the good people of this country, even common water to drink has become a problem…Enough is enough.”

But DC Abronye would not spare the NDC for failing to get the 'foot-soldiers' employed during the 8-years of NDC. Teachers and nurses could not get jobs. But Nana Addo's two and a-half-year rule has been able to get jobs for them.

Lawyer Obiri – Boahen, the Deputy Secretary of NPP calls the Ku Yen Preko demonstration a 'comic relief'. In Literature, 'comic relief' is the interposition of a humorous scene, witty dialogue or funny character in an otherwise serious or tragic element in a drama. This is usually done to relieve tension. The classical 'Greek tragedy' did not give a place to 'comic relief' but Shakespeare used it abundantly in Macbeth, Hamlet, Othello, Romeo and Juliet and The Merchant of Venice. The porter in Macbeth said: “Here's a knocking indeed! If a man were a porter of hell-gate, he should have old turning the key… who's there i' the name of Belzebub”. After the tragic murder of King Duncan, the Porter was hallucinating about being a porter in hell, and serving Belzebub. He was already in hell!

So, NDC and Bernard Monnah (with all the other so-called opposition parties) must have given themselves teasers, and also an opportunity to exercise their limbs. As they were doing these, the President was in France giving assurances to the Ghanaians there: “We are two and a-half-years into a four-year mandate, and what I continue to insist and tell the people of Ghana is that, by the end of my mandate they will see that I came to tell the truth about what I wanted to do. I didn't come to deceive anybody.”

When I heard a woman among the demonstrators saying: “Free education, “oye den?” (Free education is what?). I chuckled (giggled, tittered, laughed quietly) and asked myself: “Why did Mahama's father, a rich man, remove him from Achimota School to Ghana Secondary in Tamale?” We never went to Secondary School because our parents could not afford the fees, and…