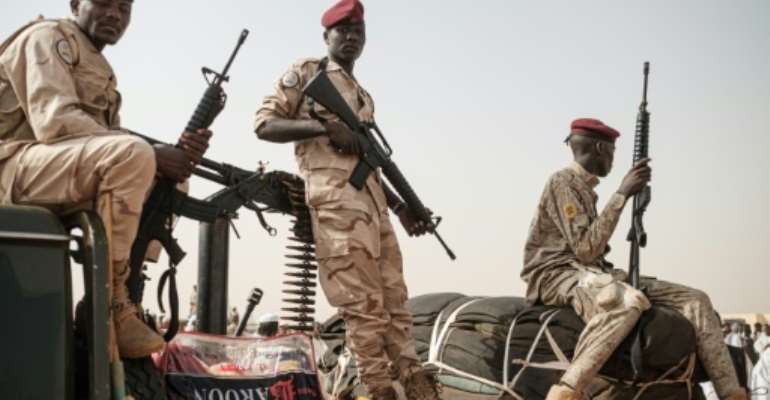 Rapid Support Forces (RSF) paramilitaries have been patrolling the streets since a June 3 crackdown on protests. By Yasuyoshi CHIBA (AFP)

Sudan's ruling generals said Friday that a new, joint proposal drafted by Ethiopia and the African Union could be a base to resume negotiations with protesters on forming a transitional administration.

The African Union and Ethiopia have come up with a blueprint for a transitional rule in Sudan after the ruling generals last week called on the two to unify their efforts to draft a proposal for Sudan's shift to a civilian rule.

The new proposal drafted by the two calls for a civilian-majority ruling council as demanded by protesters, but it fails to mention the make-up of a new transitional parliament.

"Although the transitional military council has some observations, the joint proposal from the African Union and Ethiopia can be a base for starting negotiations to form an interim authority," General Shamseddine Kabbashi, spokesman of the ruling military council said in a brief statement broadcast on state television.

"The Transitional Military Council is ready to negotiate to have an interim authority."

The generals seized power after the army ousted longtime ruler Omar al-Bashir on April 11 following months of nationwide protests against his ironfisted rule of three decades.

But since then the generals have resisted calls from demonstrators and Western nations to hand power to a civilian administration.

The joint proposal entails creating a 15-member, civilian-majority governing body for a three-year transitional period. But it makes no mention of the composition of a legislative body.

An earlier proposal drafted by Ethiopia had stipulated a transitional parliament of 300 lawmakers, with 67 percent of them from the umbrella protest movement, the Alliance for Freedom and Change.

The remaining 33 percent were to be from other political groups, excluding ousted longtime ruler Bashir's defunct National Congress Party.

On Saturday, the alliance had announced its acceptance of Ethiopia's earlier proposal but Sudan's military council expressed reservations, urging Addis Ababa and the African Union to come up with a joint proposal.

Ethiopia and the African Union have stepped up diplomatic efforts to resolve the crisis in Sudan, which has been wracked by tensions between the protest leaders and generals.

The crisis was exacerbated by the June 3 bloody dispersal of a long-running protest camp outside the army headquarters in Khartoum.

The break-up of the rally came after protest leaders and the generals failed at previous talks to agree on the composition of a new ruling body and who should lead it -- a civilian or soldier.

About 130 people have been killed since the crackdown, the majority of them on that day, doctors linked to the protest movement say.

The health ministry put the June 3 death toll at 61 nationwide.