Akufo-Addo Comment On Gender Parity: There Are More Women In The Shadows Than In The Limelight 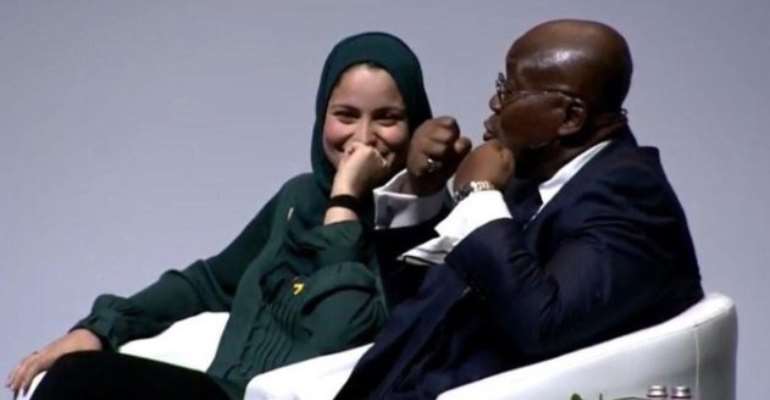 The past few days have witnessed criticisms on comments made by President Akufo-Addo on Gender parity plastered all over social media.

At the 2019 Women Deliver Conference in Vancouver, Canada, President Akufo-Addo sought to stimulate women to step up their efforts and fight for what matters to them most.

Unfortunately, however, this wasn't only taken out of context but was also misconstrued, culminating in the bastardization of President Akufo-Addo for this well-intentioned comment. One of the acerbic critics said she cried over president's comment given the latter's prowess as a human rights lawyer. Honorable Joyce Bawa Mogtari, the spokeswoman for Ex-President John Mahama did not spare the President Akufo-Addo indicating that his gender agenda was not truthful.

A flurry of these attacks prompted an immediate reaction from three appointees of President Akufo Addo's government, Honorable Hajia Alima Mahama, Honorable Shirley Ayorkor Botchwey and Honorable Ursula Owusu-Ekuful, Ministers of Local Government and Rural Development, Foreign Affairs and Regional Integration, and Communications respectively with complete unanimity agreeing that the President's comment was not disingenuous with women; rather, the former sought to spur women on to be more active and dynamic in pressing home their demands.

My view is that these Ministers of State are being honest with the truth. What is interesting is, that the President's children are all girls and he has significantly promoted the advancement of women in Ghana, if not globally. Is it not unthinkable that the President will slight, denigrate, and underestimate the relevance of women?

The first presidential candidate to have ever conceived the idea of making a woman his running mate was Nana Akufo-Addo as far back as 2008. Even though this did not see the light of day, it is abundantly clear that the president's support for and estimation of women is unalloyed and unmatched.

Again, prior to the general elections in 2016, President Akufo Addo was said to have urged the NPP, according to Mr. Gabby Otchere Darko of Danquah Institute, to 'aggressively ensure that women are selected for winnable seats.' Does this statement suggest down playing women empowerment? This is a foresightful comment that should be hailed. It will amount to double standards for such person, the President of the Republic, to turn round to overlook women who form 52% of Ghana's population.

The President's comment, 'we are not seeing enough dynamism and activism on the part of those who are seeking... I am talking about electing people to Parliament, controlling political parties because they are the instruments by which our societies make decisions,’ is a plain truth.

It is instructive to cite the recent New Patriotic Party’s (NPP) USA branch elections as a reference point. In the said elections, two women emerged as Chair and First Vice chairpersons in a very keen competition. The two women joined the race and successfully took up the two top, key decision-making positions to enable them influence issues affecting the branch. In both cases the contests were tough. Chair and First Vice chairpersons contested with formidable male candidates but the two won against all odds. It required activism and dynamism on the part of these ladies to win the election. What was so interesting in that election was, that some of the electorate had reservations about two women leading NPP-USA but this propaganda never washed. These two female candidates demonstrated capacity to lead and challenged the status quo. In the end, they emerged winners. That was an example of dynamism and enthusiasm which the President was trying to implicate during his panel discussion in Vancouver.

Another spirit of activism and dynamism that the President sought to promote in Vancouver was exemplified at the NPP national delegates conference in Koforidua in 2018. Here, Honorable Rita Talata Asobayire, the 1st Vice Chair of NPP single-handedly and independently campaigned and won against big party male stalwarts. Auntie Rita as she is affectionately called, never joined any of the camps but did it all by herself.

To echo what others have already espoused, the decision-making capacity among women in parliament increased by a small margin as more women contested parliamentary seats in the 2016 general elections. More women need to engage in civic issues and, most importantly, take up decision making roles given that more than half of Ghana’s population is female. Compared to our male counterparts playing decision-making roles, there are more women in the shadows than in the limelight.

As it has always been, most female contestants of the major political parties would form alliances with potential male winnable candidates and campaign with them. The President of the Republic is provoking females to vigorously contest for political positions which will give them the chance to utilize their knowledge, skills, and experiences to influence policy and open doors for other females to contribute to the accelerated development of our country. And for this, the President of the Republic deserve ayekoo!

To positively change the trajectory of women and families’ movement, more of our kind have to be at the decision-making table. In other words, we must prepare the menu or we will be on the menu. We need more women to ‘do’ politics or politics will ‘do’ women.

By: Dr. Tina Abrefa-Gyan (Board member of the Sunyani Tech University Council and the 1st Vice Chairman of NPP-USA)