The Journey Of Horror That Is Legal Education In Ghana 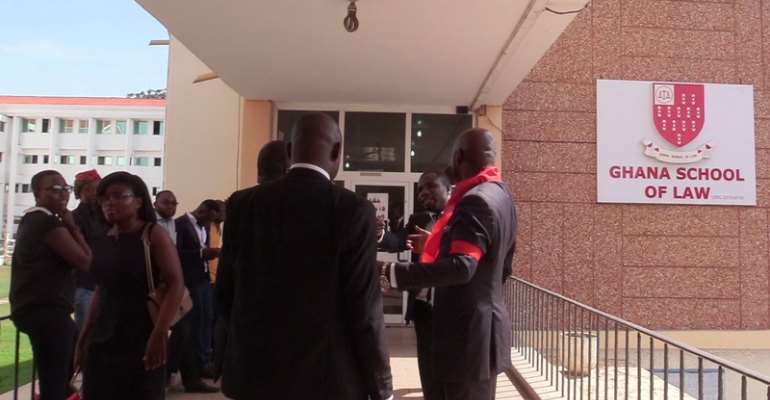 Sunday, June 16th June, 2019- Hundreds of repeating and referred students at the Ghana School of law, Makola, and its affiliates are today laboring under great tension as to whether examinations due to be held on Monday 17th of June, 2019, would come off or not.

This is because whilst the students have served an injunction process on the school, the school authorities have remained absolutely silent as to what they would do on Monday.

So far, the Coalition for the Reformation of Legal Education in Ghana can state that students of the Ghana School of Law have filed an application for injunction on the examinations scheduled to commence Monday 17th June, 2019.

The Plaintiffs, represented by Lawyer Akoto Ampaw, contend that they were given only three (3) days’ notice to register and take their examinations five (5) days thereafter. They are of the view that this time table is just unreasonable and against their fundamental human rights.

The Coalition can state that the motion on notice is scheduled to be heard on Tuesday 18th June, 2019.

There was an interesting development to the case on Friday when the lawyer for the plaintiffs sought to have a High Court in Accra to officially place an injunction the school through a motion exparte.

The High Court judge said that once the motion on notice had been served on the school, the school should know the consequences of that service.

Present at the court were Counsel for the General Legal Council, Mrs Franklina Adamu, who also serves as the acting Registrar of the Ghana School of Law.

The plaintiffs, led by the 2017-2018 President of the Students Representative Council of the Ghana School of Law Mr. Kobby Amoah, had filled one motion on notice and another one exparte. At the hearing of the exparte application on Friday, Justice Gifty Addo described the exparte application as ‘superfluous’ since the motion on notice has been duly served on the Defendants and that the Defendants ought to know the legal effect of that service.

Legal experts suggest that the service means that the Defendants are precluded from proceeding with the examinations on Monday. They suggest that that is the normal consequence. Whether or not the Ghana School of Law also knows what the meaning of the service on them of the injunction notice means, remains to be seen. So far, as at the writing of this release, the School had not demonstrated that it was going to go by what many believe to be the proper conduct. At least it had not indicated to the students that it was not going to go ahead with the examinations due on Monday.

On Friday, Mr. Akoto Ampaw, in reaction, explained that the Defendants filed the exparte motion out of ‘abundance of caution’.

Meanwhile, in spite of the fact that the Registrar of the School was present in the court when the proceedings were taking place, there had been no official reaction from the school as to what it would do on Monday, putting students on tenterhooks.

The present scenario would seem to be just an extension of the journey of horror that the students embarked on when they made the decision to study professional law, and so far, all indications are that the journey is very far from over.

Inside Politics: Political Quotes
Catch up with all the political quotes from our politicians.
Sponsored
More Article
Modern Ghana Links
The approved covid-19 vaccines: Series of clinical trials is the way to go in Ghana
Why wait till I am no more?
South African minister's COVID-19 death unites friends and rivals in tribute
The copy ‘Cat is out of the Bag’!
South African scientists who discovered new COVID-19 variant share what they know
Why healthy food and its local production should be part of the COVID-19 response
How African body markings were used to construct the idea of race in colonial Brazil
South Africa's immunisation record risks being dented by anti-vaccination views
Scholarships alone are not enough to get more qualified female teachers into Nigeria's schools
Election Reports Quotes Dossiers
TOP STORIES