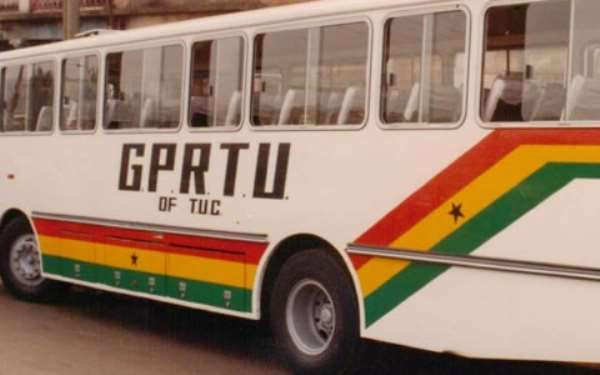 Drivers, Transport owners and Porters of the Ghana Private Road Transport Union (GPRTU) of the Trade Unions Congress (TUC) in the Volta Region have staged a demonstration against their Regional Chairman, Moses Davor.

The group who were clad in red and wielding placards marched through the principal streets of Ho, amidst singing, clapping and chanting war songs to reiterate their displeasure against their Chairman.

According to them, the actions and inactions of their Chairman was destroying the Regional Union, especially Branch Two which is located in Ho, the regional capital.

In a petition presented to Dr. Archibald Letsa, the Volta Regional Minister, through his deputy, Johnson Avuletey, members of the union accused their Chairman of engaging in fraudulent activities, some of which has plunged the union into irredeemable debts.

The Convener of the petitioners, Lawrence Attitoe, popularly known as Awilo said, mentioned among other things that, Mr. Davors 16 years' reign has been based on fraudulent and rigged elections to entrench himself. He said “elections can be held at 6:00am to outwit his opponents,” thereby creating uneasy calm.

Secondly, throughout his reign not a single account has been rendered to members as he runs an autocratic administration which has seen the disregard for the transport management committee and dismissal of elected officers with impunity. “Once you disagree with him in principle, you have become his target,” hence he resorts to the use of Police and other forms of threats to silence and intimidate members.

They also accused him of using the Regional Secretariat Complex and other individual's properties as irredeemable collateral. A situation which has put the union and some executive members in distress.

Mr. Attitoe said although the GPRTU does not operate directly under the government, the happenings over the years involves the lives of Ghanaians whose interest and lives must be protected by government.

To this end they are pleading with the Minister to among other things compel the Economic and Organised Crime Unit to investigate the source of wealth of the Chairman. To caution the Police from allegedly taking sides and allowing themselves to be used by the Chairman and his ally, Aba Francis to intimidate others.

They also welcomed the intervention of a fair arbiter to help in resolving their differences. They however cautioned that a disregard of the grievances will mean members of the union will have to take their future into their own hands.

The Chairman has denied allegations on some radio station in Ho and hinted of responding to them in due time.