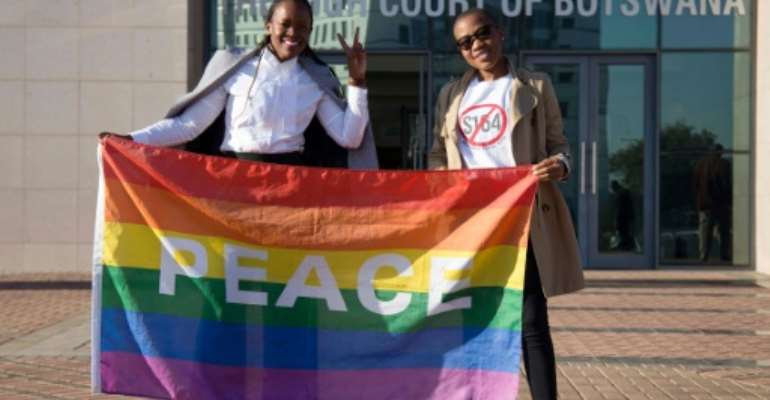 Activists pose with a rainbow flag as they celebrate the Botswana High Court's decision to decriminalize same-sex relationships. By Tshekiso Tebalo (AFP/File)

The United States on Thursday welcomed the decriminalization of homosexuality in Botswana, calling on other countries to follow its example.

"We are pleased by #Botswana's High Court decision to decriminalize same-sex relationships -- an historic moment in protecting human rights for all," State Department spokeswoman Morgan Ortagus said on Twitter.

"Congrats to the brave people who worked for this outcome. We hope other countries follow Botswana's example."

Under the southern African country's 1965 penal code, homosexuality was punishable by a jail term of up to seven years.

But Botswana's high court ruled on Tuesday in favor of scrapping the anti-gay laws, a landmark verdict that was greeted with joy by gay rights campaigners.

Globally, at least 67 countries or territories criminalize same-sex relationships, according to UNAIDS, the UN program to end AIDS as a public health threat.