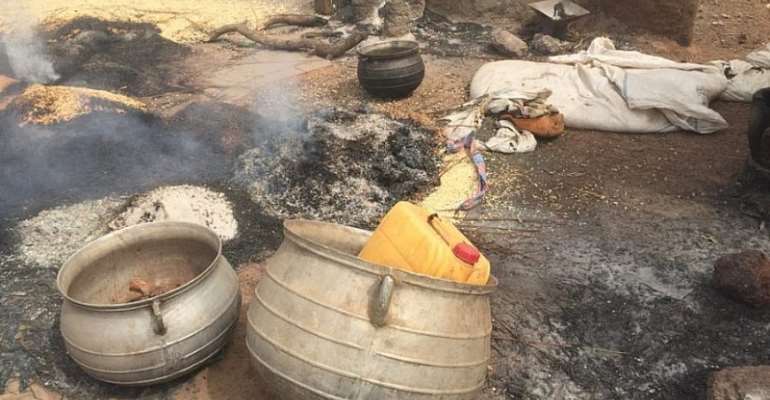 Imagine awaking to the sounds of gunshots day in, day out. Imagine being left with no sense of ambition or aspiration for tomorrow. Imagine learning amidst chaos and conflict. Imagine losing one or both parents and/or children during a clash. Imagine your home and produce reduced to ashes at full tilt. Chereponi conflict is causing a pretty penny!

Over 5000 persons have been displaced in Chereponi since the conflict broke out in 2017 while about 20 persons have been confirmed dead in recent reports. Indigenes of Chereponi in the newly created North East Region of Ghana consisting of the two warring factions – Anufos (Chokosis) and Konkomba have sustained varying degrees of injuries. The renewed clashes between the two dominant tribes occur in Saboba, a district in the Northern Region and a hub of the conflict.

The Northern Regional Security has renewed the curfew and barred the use of motorcycles between the hours of 6pm and 6am in Chereponi and Saboba.

Whereas health workers, civil servants and women are exempted from the ban on motorbikes, there’s a total ban on the carrying of weapons and ammunition. Amidst the chaos, a good number of them have fled to neighboring communities like Mamprusi and Togo.

Indeed, women and children are the most vulnerable in the cases of violence due to their defenseless exposure to the precarious circumstance. The adverse effect of conflict is a roll without butter for women and children in conflict prone areas as it is the case of Chereponi. They are left in shadows coupled with psychological mishap as and when the tribal reprisal attacks erupt.

Without a shadow of doubt when conflict breaks out, the dangers that come with it is enormous for young ones. Adolescence in itself is a challenging phase of young people’s lives. The trauma, lack of social support and services are detrimental to both the physical and mental well-being of adolescents and many have unforeseen lasting effect on them.

In such situations, their future is bleak. The lives and well-being of future generations is being toyed with, without second thoughts. Can there be a Ghana when the education, security and health of students are in total disarray? How bright is the future if the “future” is left in to grow in such violent environment?

In furtherance, women suffer health effects with the added bad experience of conflict and migration can result in complications and poor health. The women of Chereponi are victims of conflict exposed to hunger, poor shelter, injuries, loss and death of families and possession. They may have to subject themselves to begging for basic amenities to survive.

The villages that were burnt down, the bridges that were broken, the farmlands that were destroyed are causing devastating effect on our economy. It is increasing rural-urban migration rate, putting a halt to domestic and industrial activities as it drags the community into a state of impoverishment.

Howbeit, all hope is not lost in the Chereponi conflict. There's a lot we can do as a society to salvage the situation. Although conflict situations are never alike, it always starts with our thoughts.

Embracing and inculcating the preamble of the constitution of United Nations Organisation for Education, Science and Cultural (UNESCO) which says “since wars begin in the minds of men, it is in the minds of men that the defence must be constructed”.

It becomes imperative on all stakeholders including NGOs, Peace Council, Leaders of religious and ethnic groups to work hand in hand towards achieving unity by employing all means necessary to avoid both the Anufos and Konkomba to look at each other like earthenware dogs.

In doing so, women should also not be side-lined in the peace-keeping process. They are the bedrock of the society – they are wives and mothers of these men. They shoulder the responsibilities of their families.

Let me borrow the words of our Vice President, His Excellency Dr Mahamadu Bawumia when he said “Ghana is big enough for all of us. Let us respect each other, let us work together and let us beat poverty together”.

There’s no winner in conflict. Let’s look beyond our parochial interest for the future of the younger generation. Workout lasting peace in our society, there won't be opportunities for children to realise the future our leaders envisioned for them.