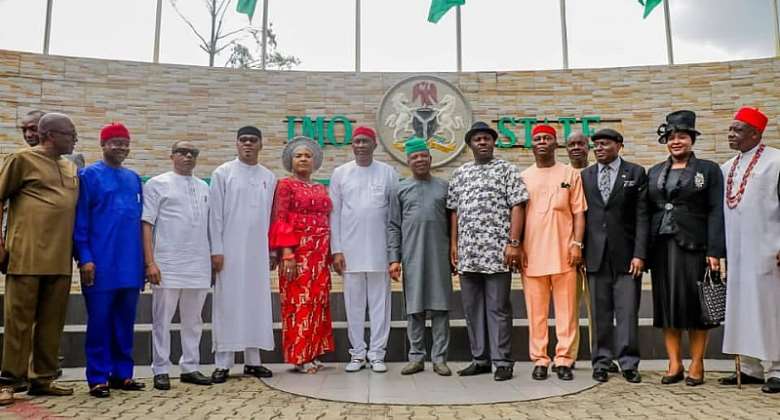 On Monday, June 3, 2019, former chieftain of the All Progressives Grand Alliance and former member of the House of Representatives, Chief Uche Onyeagucha was sworn in as Secretary to the Government of Imo State by the Governor, Chief Emeka Ihedioha. Governor Ihedioha’s choice of Onyeagucha has, as expected, generated reactions, with different stakeholders canvassing different opinions. But, why should Hon. Onyeagucha that joined the Ihedioha camp just before the elections land the post of SGI?

Apart from the fact that Onyeagucha proved his mettle, by ensuring that the attempt to allegedly smuggle in fake results during the Governorship collation was foiled, his efforts in convincing members of the ‘New APGA’ to join the Ihedioha/Irona train may not be forgotten in a hurry. Most importantly, is he qualified? Does he have capacity to deliver? If yes, why not? His choice ultimately shows that Governor Ihedioha’s promise of inclusive government is beyond rhetoric. Examples abound, but, this is a discussion for another day.

Another classical example is the Retreat for members-elect of Imo State House of Assembly. The venue of the Retreat is a Hotel in Oguta. The Proprietor of the Hotel may not have worked for the Peoples Democratic Party during the election. Reports have it that he invested heavily in the campaigns of one of the other candidates (against his brother- the Deputy Governor, Gerald Irona), but failed to make any meaningful impact in the area.

To the chagrin of many, the same Hotel is about the first beneficiary of the Ihedioha/Irona administration. Is it about the millions he will/may have been paid for hospitality services or the exposure, considering the fact that the twenty seven House of Assembly members, the Governor, Deputy Governor, aides and other top government functionaries attended? Many who never knew that such a place existed now know. What other kind of marketing does the Hotel need?

The point is simple. The Ihedioha/Irona administration is looking beyond party affiliation and loyalty in running the affairs of Imo State. They are building bridges, preaching reconciliation, while insisting on doing the right things at all times.

Ihedioha has never hidden his intention to involve as many Imo people as possible in his administration, irrespective of political divide and affiliation. He has continued to reiterate his call for all Imo stakeholders to join his government in rebuilding the State.

The Deputy Governor, Rt. Hon. Gerald Irona, pursuant to this task of bringing Imo sons and daughters together in the rebuilding Imo project had long traversed all nooks and crannies of Ohaji/Egbema/Oguta/Oru West Federal Constituency, preaching reconciliation, while calling on persons other than members of the ruling party to join the government of Hon. Emeka Ihedioha to take Imo to greater heights.

After one of such moves, one of the persons Irona visited has this to say:

“Irona shocked me. He did what I cannot do. He bought wine and came to my house after the Independent National Electoral Commission-INEC declared his Party, the Peoples Democratic Party winner of the 2019 Governorship election. Initially, I did not support his Party, but, following that move, I supported the PDP in the rerun election. Even after winning the election, he visited some of us (his old friends) who had other political interests. Henceforth, whatever he (Irona) wants from me politically, I will do it for him.”

The above were the exact words of a former Senior Special Assistant to the Governor of Imo State, Hon. Williams Ejiako when I spoke with him after a reconciliatory visit by the Imo State Deputy Governor, Rt. Hon. Gerald Irona. He indeed, supported and assisted the ruling PDP to victory in his area- Agwa, one of the densely populated areas of the state, with three electoral Wards.

In one of my quiet times with him, the Deputy Governor, Rt. Hon. Gerald Irona told me about his plans to reconcile with all his former political allies. He said it with utmost humility. I know when he is serious about issues and from the way he said it and his body language, I got the message clearly. He meant business.

On Tuesday, March 12, 2019, when, in an emotion-laden speech during a reception in his honour by thousands of political stakeholders from Ohaji/Egbema/Oguta/Oru West Federal constituency at the Haven of Peace residence of former Senator Francis Arthur Nzeribe, Irona announced his determination to reconcile all political stakeholders in the area, with a view to bringing all back into one political family.

That declaration came to many as a shock. For some, it was impossible for a Nigerian politician to want to initiate a reconciliatory move with those that worked against his interest and that of his party, after winning the election without their support. No doubt, the political culture in Nigeria is “winner takes all”. Therefore, for many, it was a strange narrative, but, he meant it.

Whoever has worked closely with Hon. Gerald Irona will know a few basic things about him. First, he does not make empty political promises. Second, he respects relationship. Third, he does not forget whatever contribution/assistance one makes to him, no matter how little. In short, he does not throw away a baby with dirty water.

To show that he is a man of his words, days after that expensive pledge, Irona took the bold step. He visited the homes of some notable political actors in the area. In all of the visits, his message was simple- we are brothers. Come, let’s work together.

He was at the residence of Hon. Eugene Dibiagwu, a chieftain of the All Progressives Congress-APC and Izombe-born confidant of the APC Governorship candidate in the last election, Senator Hope Uzodimma. He also visited Hon. Henry Igbomezie, a former member of the House of Assembly, representing Oguta State constituency in his residence, among others. In all of these, Irona’s message was simple- “We are brothers. Imo belongs to all of us. Come, let’s work together to rebuild Imo.”

Even in victory, Irona is ready to embrace and work with all. This is indeed, the spirit of the Ihedioha team.

But, this move did not go without reactions, particularly, his core loyalists and members of his political family. Many expressed fears that the same persons that confronted them in the field during the elections may be positioning to take their places in the government, thereby reaping where they may not have sown.

But, that will not be the case. Irona has continued to explain to all that the “Umbrella is large enough for everyone.” His firm belief that public offices are calls for service and not to ‘eat’ has kept him going.

But, is it a personal decision? Not likely. A look at the Transition Technical Committee and even the Governorship Inauguration Committee shows that a lot of persons other than members of the Peoples Democratic Party were on the lists. Chieftains of other political parties were involved. Technocrats and professionals from all walks of life were also involved. These are obvious signs of an administration that believes that the only language citizens understand is good governance.

It is almost certain that the ‘Ihedioha team’ is on a mission to make Imo people united in the rebuilding Imo project. The implication is that those that will manage the affairs of the state in the next four years may not necessarily be card-carrying members of the ruling PDP, but, those that have great things to offer the people of Imo State.

However, I do not envy the new Governor. Imo is wrecked. The eight years of reign of Chief Rochas Okorocha remain a deep sour on the feet of Ndi Imo. The debt profile of the State is frightening. Public Institutions in the state are grounded. The issue of Okorocha’s eight years of disaster in Imo is a case for another day, anyway.

One thing that may take some time for Imo state to get after the Ihedioha/Irona era is the rare combination of the duo. Never in the history of Imo have we had such great talents work together as Governor and Deputy. No doubt, expectations are very high, but, the fact that they have realized the need for head-hunt, with a view to identifying the best brains to help rebuild Imo suggests that they are ready for business.

But, are the reconciliatory moves working? The answer is simple – yes! While I do not support a one-party state in Imo, stakeholders must realize that the period of politicking is over. This time is for governance. All efforts should be made to ensure that Imo is better.

Irona’s reconciliatory moves are exemplary and should be emulated by all political office holders. No one person can do it alone.

Now, let’s rebuild Imo State. I have joined the train of good governance in Imo. What about you?

All hands must be in deck.
Dr. Walter Duru is a Communication expert, Teacher and Public Relations Consultant. He can be reached on: [email protected]