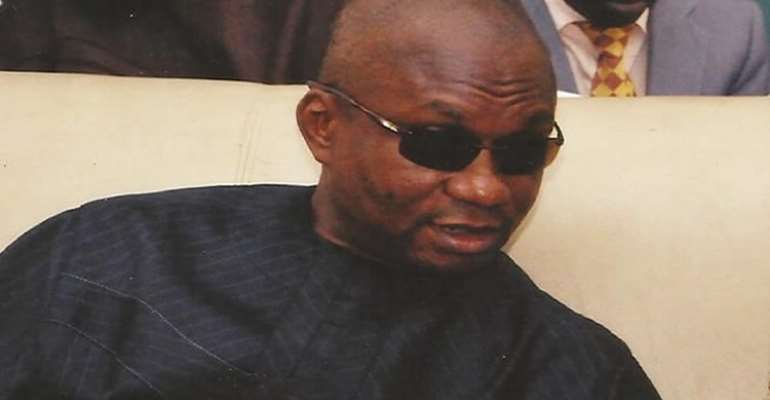 Since the emergence of Hon Chinedum Orji as member representing Umuahia Central State Constituency at the Abia State House of Assembly, people of his constituency have come to realize that despite having experienced democracy for 20 years there could possibly not have been a better representative at the Abia legislative house other than the one currently representing them right now.

In a clime where legislators are mostly accused of doing little or nothing to lift the standard of living of their constituents, Hon Chinedum Orji has proved to be a shiny exception as he has taken great responsibilities upon himself beyond just being a legislator to making visible and verifiable impact on the people of his constituency through his Direct Touch Initiative which has seen him assisting a lot of his people with the provision of electricity transformers, water boreholes, renovation of schools, health facilities etc. He has also gifted a good number of his constituents with empowerment items like grinding machines, barbing clippers, sewing machines, cars, tricycles, wrappers, cash gifts and scholarships to indigent pupils/students.

While at Methodist Girls’ High School, the lawmaker cum philanthropist donated a borehole, a six-classroom block and a toilet, he built one-classroom block and perimeter fencing at St Stephen’s Pry School. Others that benefitted from his magnanimous service to the people are Union Pry School, Afara Technical School, School Road Pry School, World Bank Health Centre, World Bank Pry School, World Bank Police Station and Central Police Station all within his constituency. He completed the Amazukwu Women Town Hall and the Umuwaya Village Hall whose transformer he also energized. Umuobasi, Amokwu in Ugba, and Ohobo in Afaraukwu, all benefitted from the lawmaker’s donations of transformers and boreholes serving the villages.

Beyond his immediate constituency, Abians from other constituencies also benefit from his magnanimity as Engr Chinedum Orji does not discriminate based on any primordial conditions while attending to the needs of the people. To him, every Abian is equal and must be treated with dignity irrespective of their social status, class, political affiliation or religious affinity. There are, of course, many other services rendered and infrastructural facilities provided the people that time and space would not permit to enumerate here.

If many other lawmakers in the country could be as dedicated to meeting the needs of the people the way Hon Chinedum Orji does, no matter how little, thereby complimenting the efforts of the executive arm of government, the much talked about dividends of democracy would be more easily available and accessible to the people in both volume and value.

As the Majority Leader of the 6th Abia State House of Assembly and a leading political light in the state, Hon Orji who is fondly called “Ikuku” which stands for “Ikuku Oma Abia” (Fresh Air of Abia), has used his position and influence so well that he has helped to keep the Assembly peaceful, stable and very cooperative with the executive arm of government. His humility and ability to work with colleagues and other political actors in the executive and the party is well known in the state’s political circle. These are rare attributes of a man of his status, serving humbly and making himself readily available and easily accessible to his people. Where there seems to be rancour, he provides succour, help for the helpless and giving hope to the despondent.

It is therefore not a thing of surprise that wherever he goes in Abia State, the shout of “Ikuku” rents the air as Abians from all walks of life including men, women, youth, the aged, widows, children etc, stumble over themselves to salute the one they strongly believe has been sent by God to bring relief to them.

The fact remains that whatever naysayers and sponsored hack writers say about him, Orji remains on a different level in visible service to the people and verifiable achievements far and above those who vainly vilify him for petty purposes. Sharply focused, he has not allowed himself to be distracted by such shenanigans nor has he allowed his exemplary service to God through humanity get dampened. Rather, Orji has promised to even do more for as many as are under the coverage of both his personal and legislative radars.

The soft-spoken lawmaker is undoubtedly a fiercely loyal party man who toes the party line on all issues. He was among those who spoke and eloquently eulogized the current governor of Abia State, Dr Okezie Ikpeazu, during a grand reception held for the governor by the Old Bende political bloc of the state in Umuahia on Friday, June 1, 2018.

At the occasion, Hon Chinedum Orji copiously enumerated Dr Okezie Ikpeazu’s achievements in the areas of quality infrastructure and good governance, and as the Majority Leader of the State House of Assembly, had the privilege of enthusiastically moving a motion for the adoption of the governor to run for a second tenure, a motion to which the mammoth crowd present resoundingly responded “aye”, which in turn led Orji to boisterously hit an invisible gavel while declaring that the “ayes” have it, causing the venue to immediately erupt in volcanic jubilation.

True to his character, no matter what his political opponents may say, Ikuku did not spare his wide connections and human resources in working assiduously for the reelection of the incumbent governor who was overwhelmingly reelected by the people of the state for a second term.

All these Ikuku has done without compromising the quality of his legislative duties which he has performed to the utmost satisfaction of his constituents who also did not hesitate to return him to the House at the recently concluded March 2019 House of Assembly election.

With his continued representation, Abians are sure that the presence of Ikuku in the House will continue to ensure that the Abia State House of Assembly is peaceful, stable, cooperative with the executive and loyal to party manifesto and government programmes, without compromising legislative principles, for the continued progress, development and prosperity of Abia and her good people. Like he promised during the campaigns, his Direct Touch Initiative will cover a wider range and more people even beyond his immediate constituency are surely going to be reached.

With people like Orji, Abia State will have a greater enjoyment of robust inter arm-of-government-relationship, and PDP's interests and manifesto will surely continue to be projected and protected in an atmosphere free from rancour and unnecessary hostilities.