Why The Chieftaincy Institution In Ghana Does Not Compromise Democracy

A Critical Evaluative Analysis Of Why The Unfounded Allegation That The Chieftaincy Institution Compromises Democracy Is Not True And The Institution Must Maintain Its Relevance And Be Respected!
By Issah Musah Aziba 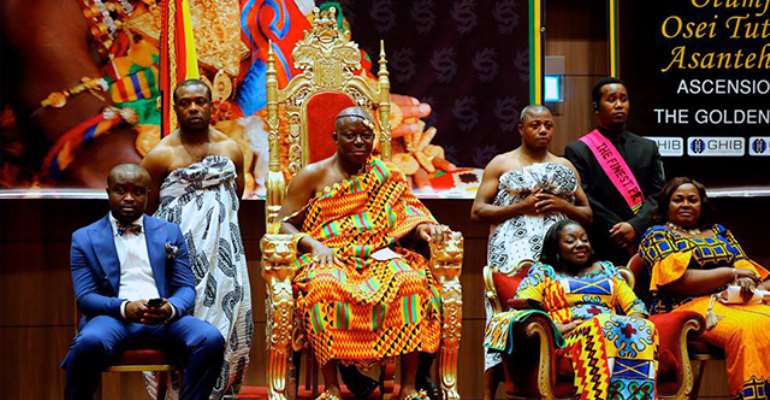 History binds our state and society to the international Capitalist-Imperialist system whether we like it or not and our fundamental law (The 1992 Constitution), underwrites this historical pledge in very clear and emphatic terms. In warranting the institution of chieftaincy, the Statutes obviously recognizes it as one of the countervailing forces in the polity that seek to safeguard the democratic project. While since the outburst of the scuffle between the Paramount Chief of Techiman and the Asante King over the ill treatment of the Paramount Chief of Tuobodom by the former, numerous views have been aerated by concerned Ghanaians about the merits and demerits of chieftaincy as a socio-political institution, the one view that has fascinated me the most the question as to whether the institution is compatible with democracy.

Those of our compatriots who view chieftaincy as incompatible with democracy argue that because of the seemingly inherent succession disputes and other conflicts induced by the institution, it poses a real threat to our nascent democratic project and therefore should be abolished outright. It is an indisputable fact that since 2000 when the NPP under former President Kufour came to power Ghanaians have embraced the central doctrines of liberal democracy with zeal and alacrity. Former President Kufour did not only preach democracy but in fact, lived it to the extent that there were calls from even opposition quarters that Ghanaians were taking the concept of free speech too far because of the dissipated language some of our compatriots, including former President Rawlings, were using to describe both the president and the office he occupied.

The nurturing of democracy in the country since 2000 has won commendation by the international community who has hailed our country as the beacon of peace and stability on the continent. This international commendation of our democratic gains was concretized in the high profile visit to the country by the US President Barack Obama under J. E. Atta Mill’s time. Moreover, this fascination with our democracy is clearly evidenced by the rate at which foreign companies in other parts of the sub-region are repositioning their headquarters to Accra. The question as to whether chieftaincy is congruent with modern democratic governance is hardly a new one as we all know. The institution of chieftaincy is the empirical manifestation of the cultural diversity which exemplifies even the so-called developed countries of the West whose development paradigm we subscribe to.

Thus, despite the fact that liberal democracy prescribes cultural diversity, some of our own social critics have suggested that the continued existence of the institution of traditional leadership in in our country is a fundamental contradiction of this democratization process. Almost invariably, such political and social analysts have argued that because traditional authority (chieftaincy) is based on birth right as opposed to elections, it compromises our hard won democracy which is true, because it is sometime highly evident that these traditional rulers are not the people’s choice yet they rule them. Moreover, they contend, the institution of traditional leadership is based on a rule by a few and therefore it is contrary to the republican ideals that underwrite liberal democracy as a system of governance.

It is interesting to note that the so-called negative characteristics of chieftaincy which make the institution repulsive to its detractors are rather ironically present in any system of governance in the influence of either Western or Eastern ideology. For instance, the issue of hierarchy, which was evidently necessary as a means to maintain order and stability in traditional society, is not the preserve of chieftaincy, but rather present in any governance system. In his observation of American democracy, the sociologist C. Wright Mills, made it clear that the major decisions in that society are made by a few overlapping interests and not by the majority of people as their brand of democracy will have us believe.

And it is worth mentioning that a chief’s Council of Elders, a central structure, which is guided by the cardinal principle of “balance” (through representation by all sections of the community), is indeed akin to the present-day cabinet under the liberal-democratic system of governance and whose decisions are open to consensus. Moreover, the calls by some of our people to “modernize” the institution flies in the face of the facts on the ground for if we accept that Western, formal education is one of the coordinates of change and hence modernization, then their reasoning becomes circular in the face of the fact that most of our chiefs now are highly educated and are leading their peoples to pursue causes that can only be described as modern.

In conclusion, let me say that the institution of chieftaincy is a social organization and as such is naturally prone to occasional conflicts. But, unlike in the pre-colonial times when the institution solely performed the legislative, judicial, and executive functions of the state, in the nation state it is a mere part of the whole. Although, the institution has lost most of the legislative, judicial and executive powers to the modern state, as a political institution it is an important competing center of power. Because the institution is a competing center of power, the direction and intensity of the conflict that is induced by it at any particular time depends largely upon its relationship with the nation state. I have argued in my undergraduate research paper to the effect that most of the conflicts we are witnessing now involving chieftaincy originated in Nkrumah’s attempts to politicize the institution to safeguard his political interests, especially, in the Brong/Ahafo region. The same tactic of using chieftaincy to divide and rule at the national level has been adopted by the National Democratic Congress in its quest to rule the country forever. For example, the elevation of the Chief of Sunyani to a paramountcy by the Rawlings administration lies at the root of the ongoing conflict between the Paramount Chief of Sunyani and the Paramount Chief of Dormaa Traditional Area, while as the Asante King correctly observed, the bias shown by the Brong/Ahafo Regional Minister was the reason for the direction and intensity of the Asante-Techiman conflict.

So, the charge that chieftaincy is incompatible with democracy is without any basis. The empirical evidence of the mutuality of the influence regarding the two systems of governance is too overwhelming to falsify. In our own country, we have record of our chiefs complementing the efforts of the central government in such areas as local government, education, conflict resolution, health (through their involvement in such educational campaigns as HIV/Aids awareness), water, sanitation and countless others. Even the effort made by the Ashanti king, Otumfour II to end the conflict between the abudu and andani in the Dagbon kingdom All this goes to show that contrary to the view that the institution is reactionary, our chiefs have creatively adjusted to the tenets of modernization and have ensured that significant elements of the traditional political system have been made compatible in practical terms with significant features of the modern state. In other words, contrary to the expectation that traditional authority would be a victim of modernization, it has successfully adapted to modernizing influences through such mechanisms as education and acculturation.

Chieftaincy has thus had continued relevance. Evidence of this includes the fact that an increasing number of highly educated young men, some with doctoral degrees from European and North American universities, are being enthroned chiefs of various communities throughout the country. Unlike during the 1950s and 1960s when educated chiefs were rare. The practice of appointing and installing chiefs as representatives among their subjects in the diaspora has become quite common nowadays. As? Sons and daughters of the soil? Of various home villages, some urban elite do not hesitate to invite their village chiefs to preside over ceremonies and functions aimed at enhancing their chances in the cities where they live and work. All these obviously account for meritorious status of the chieftaincy institution.

The argument that the chieftaincy institution is archaic and retrogressive is certainly disputable a fact that is too vague. The chieftaincy institution is an ongoing modernization process. In South Africa for instance, where even the ANC elite in struggle had predicted the passing of chieftaincy alongside apartheid, active dynamic re-appropriation of? Tradition? has been observed through claims to chieftaincy by historically marginalized cultural communities seeking recognition and representation, and chiefs like Mangosuthu Buthelezi have played and are playing key roles at the centre of post-apartheid party politics and power.

In Ghana for instance, the role that the Asantehene, Otumfuo Osei Tutu II is playing is magnification of our rich culture embraced with the promotion of education. One can just observe the great achievement of the present Asantehene, the transformation of the Manhyia palace, and the modernization role is quite impressive. That is a boost to another level of modernization. Going to the small towns chiefs play important role in the community. I, for example with a little resources, had mobilized all Adansi-Atobiase natives living home and abroad to be involved in communal labor to build a police station and a school which responsibilities would have been for the central government to assume. Ethnic elite associations proliferate in the corridors of power and resources seeking political and economic recognition and representation for their regions or peoples as cultural units. They do not hesitate to call upon their chiefs to facilitate this process of? Bringing development? To the home village, even if this entails rivalry and conflict with other chiefdoms

I always stand for the interest of the people and together, we shall fight for the change that we wanted.