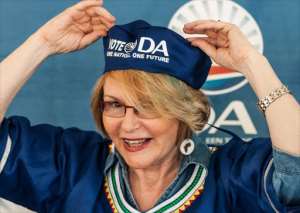 It's critical that a strong rebuttal is proffered for Helen Zille's continued elucidation on the evanescent benefits of colonization on Africans. In fact, it's important to put it plain that western civilization has not had any true benefits for humanity as a whole, other than the power of destruction.

I'm actually perturbed that none of our African intellectuals have risen to the podium to debunk what is frankly a flawed, illogical deduction by the learned premier. Suffice to add that the inability of any African intellectual to offer an effective rejoinder to Helen Zilles’ exegesis, is actually a testament of how colonialism and thereby the colonial universal narrative has attenuated rational thought in intellectual discourse. Nonetheless, before I go into puncturing her veiled obdurate argument for the white supremacy superstructure, I think I should briefly attend to her other assertions of how white people feel attacked by black people when black people talk about the effects of colonialism and its corrosive legacy on black lives today.

White people need to understand that they don't have a monopoly on opinion, and they also need to understand that the cause of black rancor is the crimes against humanity that were perpetrated against them by white ancestors. These crimes are now compounded further by the deliberate maintenance of the previous injustices by the progeny of the criminal perpetrators who deliberately lack the will to correct these previous injustices, making them complicit to the crimes of their ancestors. By white people becoming accomplices to the crimes of their forefathers through their own actions, denialism and indifference, they have inadvertently waivered their right to respond to the indictment of their own derelicts, for if there is no waiver of that right, they assume more rights than those due to them by taking up the position of accused and judge.

You insist that white people need to be given the right of reply to black people's petitions against white oppression and its consequences, referring to blacks pointing at white oppression and its consequences as scapegoating. Conveniently forgetting that what you refer to as scapegoating is merely an enunciation of the cause and effect of white prevailing avarice and discrimination expressed by black people as they become more aware of history and its present consequences.

You go further to suggest illogically that black people, motivated by writings of the likes of Fanon, have developed a mentality of hating white people and blaming white people for all their shortcomings as if black people need someone to tell them of their own pain in which they live and how they should feel about it. You say this without understanding that ours and Fanon's are just articulations of the collective disposition all black people across time and space find themselves confined due to a colonial legacy. A colonial legacy, a conspiracy deliberately built on racial segregation, subjugation and the deliberate holding back of black people to consign them to exactly the condition they find themselves in now: poverty, destitution, desperation, helplessness and resultant anger.

Today, due to some of the academic disciplines of the colonialist, like writing and record keeping, blacks have the fortunate opportunity to go through colonial records to assess and understand the mechanisations, psyche and intent of the people who devised the colonial system. To the extent that our indictment of whiteness is valid and supported by indisputable self-incriminating evidence. It's through its own writings that colonialism incriminates itself and its heirs to its delict and culpability for the black condition. It’s also because of these records that colonization remains top of black minds and reminds us of our valid claim to restitution as the only means by which amends can be made for our current state. This is why today, like the French did in the Francophone colonies, the narcissism in the colonialist compels them to make us feel like colonialism had some advantages to somehow cower us into a sense of indebtedness to silence us from claiming damages for previous and prevailing dispossession.

The moral argument
Well, for any meaningful, definitive comparison between the perceived benefits of the colonial legacy and the previous life of Africans, we would need to take a time machine (the same colonial written accounts) to go back into the era before colonisation and see the state of the African to establish whether the African ever felt any real need for an improvement to their system of life. For surely all relevant innovation in any society must emanate from need and necessity for value to be derived. So in this spirit we have a number of questions to ask and answer to fully determine the impact of colonialism on the African:

- When the Europeans got to Africa, did Africans willingly abandon their lives in favour of the patently "superior" western system?

- When Africans did assimilate did the new western lifestyle offer benefits to their needs?

- Did Africans get any return or reward for anything in their culture and nation that benefited the colonialists?

- Did the benefits that were brought by the western system get adopted voluntarily by the natives once they were exposed to them?

- Did Africans become better because of colonialism?

- Did Africa become better because of colonialism? Would Africans be better off without colonialism?

On the first account, we know clearly from history that Africans were not mildly interested in taking up the colonial system even after the colonialist had been here for centuries parading their wares. Hence, eventually primitive accumulation had to take place in the form of white military activity to take black land from black people accompanied by laws like the Glen Grey Act to dispossess black people of their means of production and to force them into labor camps as labor assets to stop them from competing with whites for the opportunity to prosper.

The western colonial system brought with it the wholesale killing of wildlife for economic gain, which saw the decimation of animals from their great abundance to a fraction of what they used to be before the colonialist got here. The result of these pogroms against nature saw these drastically reduced animals now being fenced, owned and possessed by the gluttonous colonialist, depriving the native the natural supplementary food source and clothing they had used for thousands of years before. All this with no compensation to the native.

The colonial system saw the degradation and contamination of land, forests, air and water due to western mining activities and its insatiable appetite for timber and minerals. As the forests began to dwindle, we saw the colonialist start to fence off large tracts of land for himself, depriving the African of his traditional building material and the natural pharmacy of herbs and native plants for organic traditional medicines.

Not only was the colonialist destroying the native pharmacy, they also brought with them new diseases that emanated from European poverty, squalor and depravity: venereal diseases, tuberculosis, the flu, the same diseases that had destroyed the American native populations. With those diseases they brought poisons, chemicals and acids to inject into the native as a form of cure, further ravaging the health and virility of the native.

Mining also brought with it the spewing of chemical waste into water, the creation of labor camps, overcrowded slums; European style squalor and filth, while the colonial urban settlement model brought with it the practise of defecating in the drinking water, resulting in the pollution of fresh water bodies and the contamination of the ecosystem. Colonial farming practices exacerbated soil erosion; leaching of soil nutrients by tillage; poisoning of soils, insects and fauna by chemicals, pesticides and fertilisers. New methods of animal husbandry saw the importation of livestock and alien diseases from Europe into Africa, all the above forming the relentless assault on the wealth, health of Africans and their ecosystem.

So eventually, after imposing the burden of pollution, contamination, filth and sickness onto Africans through destructive European practices, it's not surprising that Europeans then brought the temporal remedies for the problems they had created. Education was the answer to teach Africans how to survive in the corrupted African system that they had created. While technology was Europeans creating tools to further their parasitic and exploitative culture to exploit Africa as they had done Europe. These were the benefits of colonialism. Notwithstanding that the capitalist western system has been known to create problems and then provide solutions to the same problems as has profited the pharmaceutical industry for a century.

Nature evolution argument
In the final analysis on whether colonialism was good for Africans or the world, it's one that will not be arrived at without finally establishing the purpose of humanity on the earth and by deduction the purpose of all life on the earth.

It's become basic scientific discovery that the world is an ecosystem, an ecosystem employing the symbiotic interrelationship between all living organisms for their mutual benefit and survival. As part of the same dialectic, intelligent life has the sole purpose of procreating, evolving and surviving by offering value to other organisms in the ecosystem so that it can receive the life sustaining benefits from them in order to create conditions for the pro-creation and survival of its off-spring into perpetuity for continuity of the species.

Well the answer to that is simply: No. Faced with pollution [industrialization], global warming, increasing disease burden, engineered scarcity [economics], injustice [law], hunger, poverty, wars over resources, depletion of resources, nuclear threat, economic crushes we will have to admit that the western civilization project is a failure and it's in irreversible collapse.

So in reality, the argument of colonial benefits to Africans or humanity is a universal deception built on maintaining the notion of white supremacy and a manufactured consent that all innovation is beneficial and that those fostering that innovation deserve a cult status as a back drop to amass wealth even though their innovations might actually bring extinction to life.

In conclusion, there was more benefit for Africans, the ecosystem and human development had human beings done nothing, rather than innovating to bring rise to new problems that then required more innovation and creating more problems, all contributing to a cycle of extinction instead of perpetuating a cycle of life. There can be no greatness in a species that innovates itself into destruction.