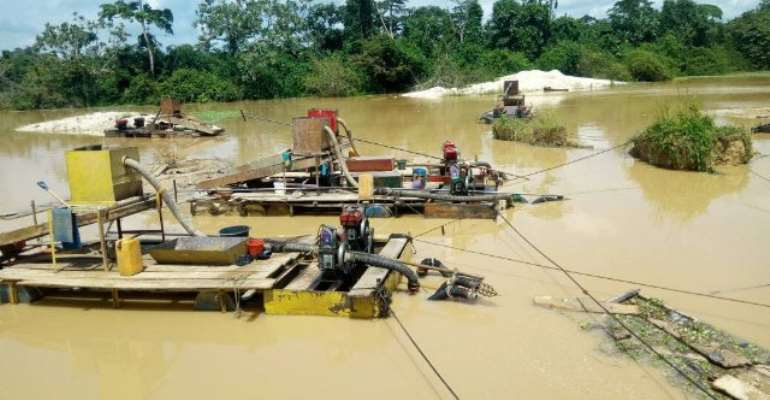 Galamsey equipment at Amansie West in the Ashanti Region

“The spirits of Ghanaians who have seen the damage being done agreed with the President [regarding his pledge to end illegal mining]. Many of us willed him on.

“Now…we have just heard the Senior Minister, someone who has held several key portfolios in previous governments; someone with a lot of clouts saying that somebody can come from another country into Ghana, commit a crime, flout the rules and the laws of Ghana but for other economic considerations, we will let that person go.”

The Senior Minister, at a t9wn hall meeting USA, said Ghana has good diplomatic relationship with China and intends to partner the Asian country in key infrastructural projects, citing the $2 billion Sinohydro deal.

Some Ghanaians are calling for the Senior Minister's resignation or be fired.

Me Malor cited the 2005 arrest and imprisonment of a Ghanaian Member of Parliament, Eric Amoateng, in the United States for drug trafficking as an example of a country where laws work asking government to do the same.

According to him, the Chinese Ambassador who has since made headlines was brutally honest.

“Why should it take the Chinese ambassador to Ghana to tell us what we should ourselves be telling ourselves? Should we Ghanaians give this man a prize for brutal honesty in telling us where the problem lies?” he intimated.

You're a disgrace to Asanteman — Efo Newton blasts KuYa, ASU...
40 minutes ago