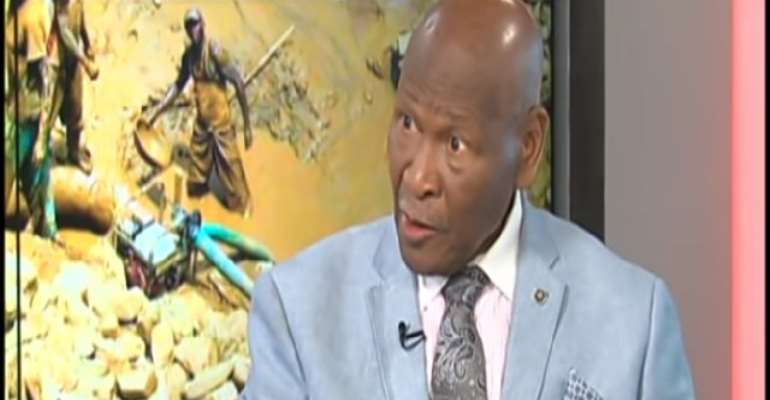 According to Sam Okudzeto Ghanaians 'seem to be so much interested in the immediate wealth to the extent that we are killing ourselves without appreciating.'

“Our discretion was to the effect that the trial of Aisha Huang should be truncated to afford her the opportunity to go to her country. That was in line with the laws of our country. The attorney general is cloth with the capacity to enter nolle prosequi in respect of this matter,” Asomah-Cheremeh, a lawyer, told Joy News on Thursday.

But Sam Okudzeto disagrees indicating that discretion is not a subject you just throw about but must be exercised in accordance with the law.

“You can question the attorney general who entered the nolle prosequi. When the previous president granted amnesty to the ‘Montie 3’ I told them he has no authority and power to grant them amnesty because they were endangering the nation,” the former Ghana Bar Association president blurted out.

Drawing a distinction between morality and legality, he argued that the fact that something is legally right does not make it morally so.

He argued that there was nothing right about allowing foreigners to endanger lives and destroy water bodies without asking them to pay for it.

“The waterways that [Aisha Haug] destroyed is going to cost millions to put right. And who is going to tell me someone has the discretion to let her go? Is that the proper use of discretion? I don’t think so. There is something called national interest.” Sam Okudzeto said in a patriotic tone.

But the issue appears to transcend the realm of just what is right or otherwise use of discretion.

The Senior Minister, Yaw Osafo-Maafo has said the decision to discontinue the prosecution of Miss Haug has economic prospects for Ghana.

At a recent town hall meeting abroad he argued strongly that Ghana has great diplomatic relations with China and intends to partner that country in key infrastructural projects citing the $2 billion Sinohydro deal.

“Today, the main company that is helping develop the infrastructure system in Ghana is Sinohydro, it is Chinese Company. It is the one that is going to help process our bauxite and provide about $2 billion to us.

"So, when there are these kinds of arrangements, there are other things behind the scenes. Putting that lady [Aisha] in jail in Ghana is not going to solve your economic problems,” he said.

“But I disagree with him,” Sam Okudzeto said in response to the senior minister’s claim when it was brought to his attention.

“There seems to be a certain madness that has engulfed Ghanaians. We seem to be so much interested in the immediate wealth to the extent that we are killing ourselves without appreciating it,” he said.

The implication of galamsey activities has dire consequences even for the future long after the act. He held

“You can say you have stopped galamsey but I can tell you it may take 50 to 60 years for that soil to be useful again because if you plant food in it you are eating poison, if you drink water from it you are drinking poison. You may not see the effect today but most people may develop cancer,” he advanced

According to the Council of State Member, the pervasive indiscipline in the country, lack of respect for people and the corruption going on in the country are direct result of failing to punish what is wrong.

“What we need to understand is that when people do the wrong things and they are not punished, others also think they can also do it and get away with it,” he said.

The Media Coalition Against Illegal Mining agrees with the assertion of Mr. Okudzeto. They said that the message that the discontinuation of the prosecution of Aisha Huang sends is worrying.

According to Ken Ashigbey, “Messaging is so important. The message that comes from what the Senior Minister has said is a fatal blow to the fight against galamsey. It is very demotivating to everyone who is involved in this.”

“I think there should be a correction of it from the minister of information right down to the president, something needs to be done about it,” the convener of the coalition told Joy News in an interview Thursday.