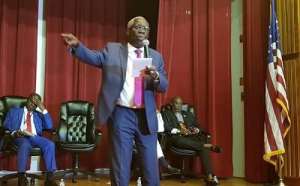 Kweku Baako said if the minister, highly ranked within the government, keeps his silence and his sorry further “it may eventually make an apology look redundant” when it does come.

Abdul Malik Kwaku Baako said it’s because the Senior minister has not taken advantage of the potential of an apology and retraction to quell the condemnation blitz.

“Why we back to these issues?” Malik Abdul Kwaku Baako, the veteran journalist sized up another invitation to comment on the controversy.

Although a Facebook post of the Senior minister tried to bring some clarification it did more to keep the criticisms coming than going away.

Easing Of Restrictions A Ploy To Pave Way For EC To Carry Ou...
55 minutes ago