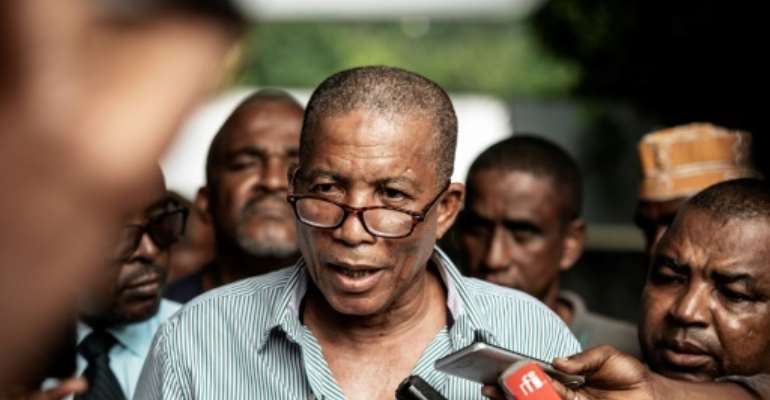 Soilihi, pictured here on voting day on March 24, was arrested after challenging the outcome of the ballot. By GIANLUIGI GUERCIA (AFP/File)

Colonel Soilihi Mohamed was picked up on March 28 after declaring he was heading a "National Transitional Council" (CNT) calling for a new vote.

President Azali Assoumani was declared victor in the March 24 vote on the unstable Indian Ocean archipelago.

Rivals said the election was rigged and aimed at consolidating his grip on power.

After being released by a court in the capital Moroni, Soilihi distributed a press statement saying he wanted to "congratulate President Azali Assoumani on his re-election" and to "distance" himself from opposition colleagues who had condemned the result.

Azali was declared winner with 59 percent of the vote, well ahead of his nearest rival Mahamoudou Ahamada, who scored 15.7 percent. Soilihi, a widely-respected former colonel, placed a distant fourth.

Comoros has had a volatile political history since independence in 1975, enduring more than 20 attempted coups, four of which were successful.

The election followed a referendum last year, boycotted by the opposition, to extend the presidential mandate from one five-year term to two.

On Saturday, a judge at the State Security Court told the press that Soilihi and at least other eight detained people would be prosecuted for seeking to "destabilise the state."

Soilihi said in his statement he was aware of the "heavy responsibility" of "calling for civil disobedience".

"I distance myself from the CNT... (and) the tenor of its declarations, which flout public order and our institutions," he said, and condemned "the underground forces of destabilisation" in the country.

There was no immediate reaction from other opposition candidates