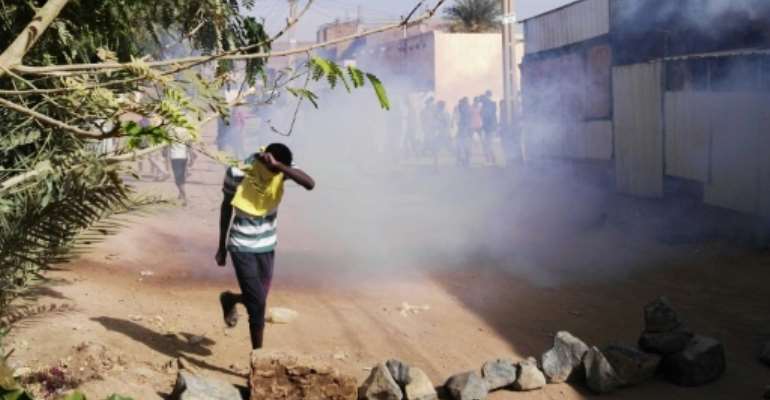 Sudanese protestors have continued to demonstrate for three months despite a nationwide state of emergency. By STRINGER (AFP)

Sudanese police fired tear gas at protesters defying a nationwide state of emergency on Thursday, with demonstrations in the capital Khartoum and elsewhere, witnesses said.

Protests and deadly clashes have rocked Sudan for more than three months, fuelled by accusations that the government has mismanaged the economy, causing food prices to soar and creating shortages of fuel and foreign currency.

On Thursday protesters demonstrated in Khartoum's Burri and Bahari districts as well as in Omdurman, the capital's twin city, witnesses said.

They were swiftly tear gassed by riot police.

Protesters also rallied in the town of Madani, southeast of the capital, and in a town in the state of North Kordofan, witnesses told AFP by telephone.

"Protesters chanted anti-government slogans as they gathered in Madani's main market, but they were confronted with tear gas," a resident of Madani said on condition of anonymity.

Protesters also came out on the streets in the eastern border town of Kasala, witnesses said.

Protests first erupted on December 19 in the central town of Atbara in response to a government decision to triple the price of bread.

They swiftly escalated into nationwide demonstrations calling for an end to the rule of President Omar al-Bashir, who swept to power in a 1989 coup.

Bashir has remained defiant, and following an initial crackdown on protests he imposed a year-long state of emergency, which parliament later cut to six months.

Officials say 31 people have died in protest-related violence, but Human Rights Watch has put the death toll at 51, including children and medics.

Several demonstrators have been jailed by special emergency courts set up to investigate violations of the state of emergency.

Since the new measures came into effect, the scale and intensity of protests have shrunk, with once daily demonstrations turning into weekly rallies, usually on Thursdays.

The movement, seen by analysts as the biggest challenge yet to Bashir's rule, was initially led by the Sudanese Professionals Association (SPA).

Several political parties have since then joined the SPA to form an umbrella group called the Alliance for Freedom and Change to call for protests against the veteran leader's rule.

There's no sale of Government lands in Ho — Volta Region Lan...
7 hours ago