Over 160 Dead In Zimbabwe, Mozambique As Cyclone Destroys City

By Adrien BARBIER with Zinyange AUNTONY in Chimanimani
Zimbabwe 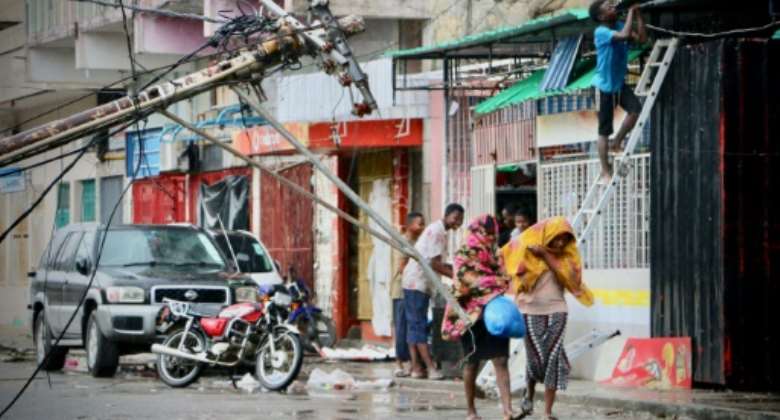 A cyclone that ripped across Mozambique and Zimbabwe has killed at least 162 people with scores more missing and caused "massive and horrifying" destruction in the Mozambican city of Beira, authorities and the Red Cross said Monday.

Cyclone Idai tore into the centre of Mozambique on Thursday night before barreling on to neighbouring Zimbabwe, bringing flash floods and ferocious winds, and washing away roads and houses.

"The scale of damage caused by cyclone Idai that hit the Mozambican city of Beira is massive and horrifying", the International Federation of Red Cross and Red Crescent Societies (IFRC) said in a statement.

It said 90 percent of the city of some 530,000 people and its surrounding area had been "damaged or destroyed"

"The situation is terrible. The scale of devastation is enormous," the IFRC's Jamie LeSueur was quoted as saying in the statement.

The Red Cross said 90 percent of Beira its surrounds are "damaged or destroyed". By ADRIEN BARBIER (AFP)

A toll compiled Monday by AFP from official sources puts the death toll in Mozambique at 73, including 55 in Beira alone, and 89 in Zimbabwe.

At least 150 more are missing in Zimbabwe, many of them believed to government workers whose housing complex was engulfed by floods.

"I think this is the biggest natural disaster Mozambique has ever faced. Everything is destroyed," he told AFP on Sunday night said at Beira international airport, which re-opened after being temporarily closed because of cyclone damage.

In Zimbabwe, Idai swept away homes and ripped bridges to pieces, leaving a trail of destruction that the acting defence minister, Perrance Shiri, said "resembles the aftermath of a full-scale war".

The Red Cross described the destruction in Beira as "massive and horrifying". By ADRIEN BARBIER (AFP)

Roads have been swallowed by massive sinkholes, while bridges were ripped to pieces by flash floods, according to an AFP photographer.

Zimbabwe's eastern district of Chimanimani was the worst-hit part of the country, with houses and most of the bridges washed away by flash floods.

"The teachers and school authorities are making all efforts to ensure the children arrive and we take them home but it seems the situation is getting worse," one unnamed parent told the state broadcaster ZBC, as she raised concerns about the ongoing rains.

Joshua Sacco, lawmaker for Chimanimani, told AFP by phone, that between "150 to 200 people" are missing.