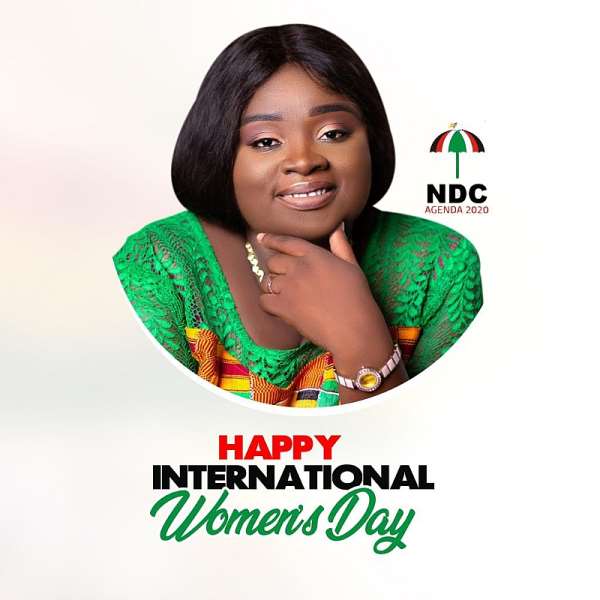 An aspirant for the 2020 Parliamentary ticket of the opposition National Democratic Congress (NDC) in Anyaa-Sowutuom, Mrs. Irene Mensah, has sent felicitations to Ghanaian women, especially those in her Constituency, on the occasion of this year's World Women's Day.

In a statement, she celebrates the tenacity of all women in a typical estrogen affair.

“I believe congratulations are very much in order for all of you who play crucial roles as mothers, sisters, wives, teachers traders, doctors, and Ministers among others. It is because of you the unsung heroines who work behind the scenes that we are where we are as a community, as a country and as a world in progress. Thank you!”

Mrs. Mensah asked that women continue to be the light of the world, “and continue to show to all humanity that God Almighty did not take His time to specially craft us for nothing.”

She hailed all leading female figures who are serving as torch bearers for women's empowerment around the globe saying, “because of those feminine steps, which are de-emphasizing the sexuality of a woman and emphasizing her genius, today the frontiers of prejudice against our sex is crumbling all around the globe.

Mrs. Irene Mensah, is a typical example of the changes occurring in the traditional chauvinistic outlook of the world. As a leading contender for the 2019 Anyaa Sowutuom Parliamentary ticket for the NDC, she has her husband solidly behind her.

She is also tipped to be a more winsome candidate against the ruling New Patriotic Party (NPP)'s Shirley Ayorkor Botchwey, who has for the past three terms, leveraged her feminine personality to beat males fielded by the opposition NDC.

Indeed, in Anyaa Sowutuom, the NDC's best showing in the Parliamentary elections happened when another woman, Sedina Tamakloe Ationu, was the NDC's PC. Since Sedina gave way, all the men who have contested after her have recorded dwindle in votes.

“I want to also use this opportunity to celebrate all the women of the great NDC, who have shown all of us that it is possible to become MP on our party's ticket and excel in Parliament. In My own Constituency, Mrs. Sedina Tamakloe Ationu is a shining example of how powerful women really are in the politics of Anyaa Sowutuom” Mrs. Irene Mensah said.

She called on all the women of Anyaa-Sowutuom, to close their ranks and work together for the betterment of all women in the Constituency.

The woman who has been described as the incoming NDC PC for Anyaa Sowutuom also used the opportunity to reiterate her demand on the Akufo-Addo government to expedite action on the rescue of the school girls in Takoradi, who remain in the clutches of kidnappers, after they were snatched months ago.

“On this occasion of International Women's Day, we reiterate the demand that our government do more to free our innocent sisters from the clutches of those criminals, so that they can return to their loved ones and their education; we demand action now!” Irene Mensah said.