The Blame-Game Theory! Who Wins And Who Gains? 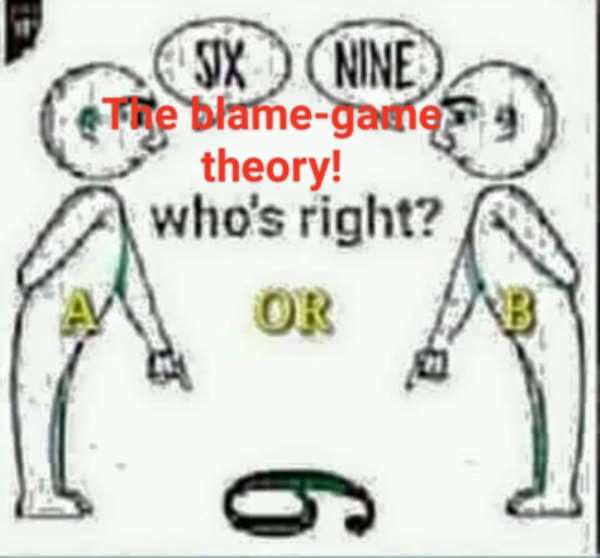 Early hours of last week, Liberia woke up to the most-talked-about ‘16B’ report. Though it's ludicrous to believe such quantity of local currency (Liberian Dollar-LRD) filled in a container would go missing without a single trace, yet only an independent investigation could unearth the truth. For some, it's a snapshot of fun and unique opportunity to score political goals against the incumbent while others saw it as a perfect moment to save the tainted image of the country via truthfulness to power.

Flipping through the pages of the detailed report backed by citizens’ reactions, something interesting grabbed my attention on the ‘new normal’ of our body politics. The ‘new normal’ we've seen in the public domain mainly from political actors and supporters is what I allude to as the ‘Blame-game theory’. Blame-game theory, I mean, owning the good and disowning the bad. This mirrors my mind to the words of my late mother “Stubborn orphan is extremely unlikely to attract legal adoption”. Good is good and bad is bad regardless who's involved. Good governance denotes priding in the good and taking full responsibility for the wrong with corrective measures.

Now, let's switch to the synopsis of the USAID sponsored Kroll's investigative report covering the period of January 1, 2016 to December 7, 2018. “Kroll has identified discrepancies at every stage of the process for controlling the movement of banknotes into and out of the CBL during the Independent Review, including: the Legislature approval for printing new banknotes; the procurement and contracting of Crane AB; the shipping of new banknotes to Liberia; the delivery of new banknotes to the CBL, and; the movement of funds within and out of the CBL’s vaults”. These are strong words of Kroll Associates, Inc., painfully pointing to gross abuse of vested authority, systematic bias, internal and external controls’ breaches, monetary deficiencies and financial mismanagement manly within the monetary power house(CBL).

In subtleties of the report, there're 10 grieved findings outlined by the independent forensic investigative firm ranging from control mechanisms, legislative approval, procurement and contracting of legal tender(LRD), and movements of currency. These are material findings strictly levied against fellow Liberian citizens not the normal politics of incumbent versus opposition, so what's vital now is to judiciously and impartially dispense justice against political and social interests.

In the context of zero win and gain, I join from afar in demanding speedy and fair justice, as well as inject the following points:

Again, instead of playing the ‘blame-game’ of predecessor versus successor, it's prudent we take time to meticulously analyze the faults and connect the holes in our public financial management corridors. It's a big shame to scapegoat the situation as this is tied to the image of our country especially the investment climate of the country we're governing or intend to govern. The normal culture of impunity is seriously undermining the fight against corruption as this is a litmus test for the incumbent to strengthen its integrity institutions in raising the bar and maintaining citizens' trust and confidence. Baba Odewale laid out in his famous script (The gods are not to blame), “Only a mad man goes to bed with his roof on fire”. Dig deeper! Name, shame and impartially prosecute the bad apple while recognizing and commending the good.

Public Sector Management has taught us that one of the meats of good governance is honesty, that's, being truthful to power. Honesty, an inseparable virtues deeply rooted in the heart. It’s that value that sticks to the conscience! A good lawyer can spine his arguments to win an unwinnable case, but he cannot win his conscience. ‘My government is exonerated’ is not quite the same as ‘My country is exonerated’, so the best thing President George Weah can do is to step above the ‘Blame-game theory’ with a bipartisan approach by acting with ingenuity not emotionality. Chief, the ball is in your court, shoot the winner or lose the ball!

Disclaimer: This remains my independent opinion; neither represents the views of my employ nor family.