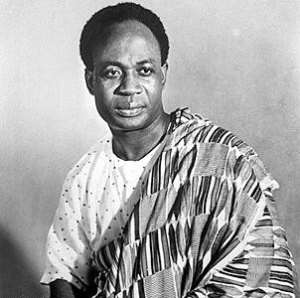 When an opposition party wants power badly, it will do anything including welcoming even illegalities. In the United States when the Republicans needed to capture the presidency in 2016, they colluded with a foreign power-Russia to hack the computers of the Democratic National Convention (DNC) and used the hacked information to smear Hilary Clinton. The Russia-Republican collusion is the subject of the Mueller investigation.

In Venezuela, the opposition leader Juan Guaido has declared himself president and has been quick to welcome support from US, Canada, and Britain among others. Even though the opposition’s actions are a clear case of coup d’tat, gaining power has blindfolded them not to reflect on their actions. The actions of the Venezuela's opposition reminds me of Ghana in the early 1960s.

Ghana took a giant leap forward toward industrialisation immediately after independence. With a series of remarkably important infrastructural projects (Akosombo Dam, Tema Harbour, Tema Motorway, Tema Oil Refinery, Volta River Authority, Electricity Corporation of Ghana) Kwame Nkrumah laid the foundation for Ghana's industrialisation. As part of the drive toward industrialisation, Bank of Ghana (BoG) was established in 1957, the Ghana oil Company (GOIL) was founded in 1960, the State Insurance Company (SIC) was formed in 1962, the National Investment Bank (NIB) was established in 1963, the Agricultural Development Bank (ADB) was founded in 1965, the Social Security and National Insurance Trust (SSNIT) was formed in 1965, the Ghana Commercial Bank (GCB) which was established in 1953 as the Bank of the Gold Coast was rebranded in 1957 all with the purpose to deepen the industrialisation process.

Following the building of these major infrastructures and the establishment of banking and finance houses, a number of industries were established all over the country to produce food, capital goods and services for direct household consumption as well as capital goods to feed local industries and for export. Notable among them are VALCO, Ghana Cement (GHACEM), Tema Steel Works, the Takoradi Paper Mill, the Aboso Glass Factory, Saltpond Ceramics, Brick and Tile Factories and the Pre-fabricated Concrete Products, the State Housing Corporation (SHC), the State Construction Corporation (SCC), for construction and equipment development purposes.

Akoko Foto and State Hotels to develop the hospitality and other services. The idea was for these industries to help build the technical and managerial capacities of Ghanaians and to prepare the ground for Ghana's transition from light to heavy industries. These industrial strategies are similar in many ways to how Japan, South Korea, Taiwan, and Singapore developed and catch up with Europe and America.

The opposition in Ghana needed power badly and resorted to illegal tactics including several attempted assassinations on the life of President Nkrumah. When they failed to assassinate him, they managed to enlist the US and Britain to incite the Ghanaian armed forces to mount a coup against Nkrumah. They succeeded in gaining power but failed to transform Ghana’s economy. Today, Ghana’s Gross Domestic Product (GDP) which was in the same region as that of South Korea in the 1960s, is less than $50 billion while that of Korea is $1.59 trillion.

Meanwhile the United States which encouraged the Ghanaian military to stage the coup has never shown any interest or real commitment to help Ghana develop. It never spent even 10% of the $932 billion it has so far spent in Afghanistan since 2001.

Today, more than 52 years after the overthrow of Nkrumah, it is ordinary Ghanaians who are paying for the stupidity of army officers and the impatient opposition. Today, Ghanaians are some of the miserable people on the planet with deeply disturbing poor living standards. They cannot pay their healthcare bills, don’t have access to 24hour/365 days electricity; don’t have access to potable water, better housing and are poorly educated. Unemployment, particularly youth unemployment has reached epidemic proportions. Some of the unemployed youth have resorted to fraud and internet scam, scamming Americans and British citizens to part with their wealth. After living in poverty for decades, the citizens are fleeing the country in droves in search of greener pastures. Some have lost their lives trying to reach Europe via Libya and the Mediterranean Sea.

Accra the capital is a filthy city, crowded with people and unmotorable due to congestion. Ghana's railway system built in the early 1900s by the British remains as it is with little to no upgrading or modernisation.

But here is the irony: while majority of Ghanaians struggle to make ends meet, the descendants of the opposition members that replaced Nkrumah are living in luxury driving expensive cars, living in luxury housing, healthcare tourism in USA and Britain, and fat bank accounts in foreign countries. Today the descendants of the opposition that replaced Nkrumah have constituted themselves into a cabal capturing state institutions and using them for their own personal interests. They own most of the country’s assets which they fraudulently acquired. Corruption has worsened under their watch. Today, Rule of law in Ghana is receding. Big time criminals including most of the country’s leaders walk free while ordinary people with minor crimes are sent to 16th Century-style prisons with little food and healthcare. Journalists are killed by those powerful criminals who feel threatened by the work of journalists. Land guards terrorise people at will. Kidnapping is fast gaining grounds in the country. Ritual murder is increasing.

All this has befallen Ghanaians because the army and the opposition that replaced Nkrumah’s government never managed to accomplish 5% of what was achieved by Nkrumah's government. The lack of vision on the part of the coup leaders and the opposition has turned Ghana into a laughingstock. Although the country has implemented almost all the policies recommended by the World Bank and IMF the economy remains extremely weak, relying on export of raw materials the same as it was before independence. The revenues from the export of raw materials do not go to build the country but line up in the pockets of the rulers.

Today Nkrumah is more popular than ever. He is talked about and respected in Ghana and abroad while the coup plotters and the then opposition leaders are known only in the villages where they grew up.

Ghana's opposition parties of the 1960s with the help of America inhibited the country's diversification agenda and thereby contributed to the deindustrialisation of the country.