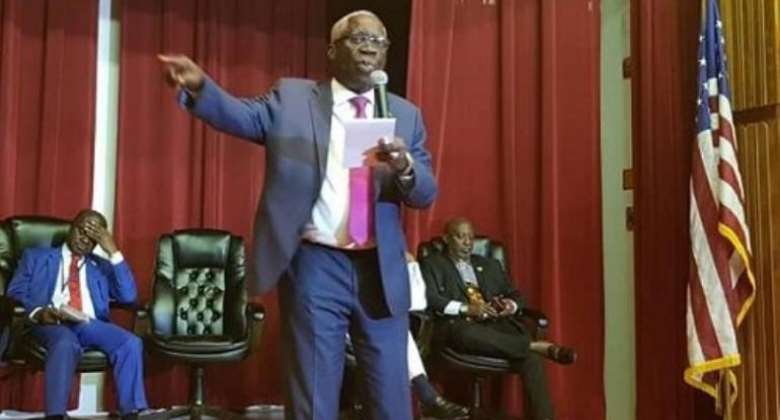 He said: "The main company that is helping to develop the infrastructure system in Ghana is Sinohydro, it is a Chinese company, the one that is going to help process our bauxite and provide about $2 billion to us. When we have these kinds of arrangements there are other things behind the scenes. Putting that lady [Aisha Huang] in jail in Ghana is not going to solve your economic problems".

Nobody doubts the strategic importance of China in the current global economic and political system. We are aware that China is the world's second largest economy and is the leading trading partner for more than half of the countries in the world. With its 1.4 billion people, China is a huge market for economies all over the world. Again the growing number of successful businesses in China, offers the countries in the world a rich and diversified source of investment. However, this doesn't mean Accra should throw away its laws, dignity and sovereignty when dealing with Beijing. By his comment Mr Marfo is saying maintaining good bilateral relations with China, including keeping Chinese investment flowing into the country is far more important than enforcing Ghana's laws, maintaining our sovereignty and protecting our dignity. He is also implying that it is in Ghana's interest to let foreigners come into the country to abuse our laws because they are investing in the country.

Yaw Osafo Marfo’s very disturbing Aisha Huang comment is not an isolated one but rather a broader problem within the NPP-led government especially when it comes to protecting the national interests. Since taking over power from the NDC, President Akuffo-Addo's government has been committing crimes against logic by agreeing to sign deals that nations only agree to after they have been defeated in kinetic wars. In 2018 for example, the government signed a security deal with the United States which granted the American military unfettered access to Ghana’s security facilities while getting almost nothing in return. When questioned why it agreed to such a bad deal, Ghanaians were told the US would give $20 million to the state as if the money is anything substantial. Egypt gets $1.3 billion a year and Israel receives $3 billion a year for cooperating with US on defence and security matters. Therefore it is betrayal even treasonable on the part of government to settle for a mere $20 million.

In that same 2018, President Akuffo Addo was forced to sack Boakye Agyarko, former Energy Minister after the latter signed an energy deal that would have saddled Ghana with hundreds of millions of dollars of debt for decades.

Several policies initiated by the government were so shoddily formulated, a non-expert could easily predict their failure. For example Free Senior High, the government's flagship education programme, is now running on a shift system largely because very little thinking went into its design. Dumsor too is back in many communities because the government hasn't developed a comprehensive energy policy.

Security. Yes security. There is a terrifying rise of serious and violent crime of all sorts in every part of the country. Hardly a day goes by without someone being kidnapped, murdered or being robbed in the country. Several Ghanaians and non-Ghanaians have been kidnapped since the beginning of the year. In April 2019 for example Mr. Umpakan Chodri an Indian businessman was kidnapped in Kumasi. Mr. Nabil Makram Basbous, the Consular General and Head of Mission of Estonia to Ghana was kidnapped in Accra. As a result, many of the few well to do in the country are considering getting their own personal security while residents of some communities have threatened to take the laws into their own hands to protect themselves. This begs the question why must the government pay Albert Kan Dapaa and his associates when they are failing to protect life and property in the country?

Sanitation, galamsey, and the economy are all in serious trouble of being failed. For instance despite promising to make Accra the cleanest city in Africa, we are being told that Accra will become clean during the second term of Nana Akuffo Addo which leads me to ask the question who is going to waste his vote to elect a government that can’t deliver the easiest of its own policies. The growing problem of sanitation (which is being blamed on the attitude of Ghanaians by the government is another example of the lack of strategic thinkers in the NPP. The truth is that most of the government’s policies are designed to harvest the low hanging fruits without a clear strategy as to how to harvest fruits at the top of the tree.

Corruption in Ghana under the NPP has not declined. This government is doing a very bad job to fight corruption in the country. The loot and share policy of the John Mahama government has not been dismantled. Woyome's money has not been collected as promised. Kwesi Nyantakyi is having a big laugh. Gloria Akuffo, the Attorney General has shown no interest in fighting corruption in Ghana. She is hiding behind the idea that corruption allegations must be thoroughly investigated, charges preferred followed by prosecution.

The truth about the lack of energy to fight corruption is that the NPP and NDC have ‘I scratch your back, you scratch my back' agreement with each other that is why Attorney General Gloria Akuffo, Martin Amidu the Special Prosecutor and their teams haven’t been able to put a single high profile official in the dock on corruption charges. What does that say about Rule of Law in Ghana? It means there is one set of law for corrupt NPP and NDC politicians and their associates and another set of law for everyone else.

But on a serious note, they all point to the lack of strategic thinkers in the government, people who deeply understand the local and global situation and are able to formulate policies using the best global standard.