The Chief Justice Of Nigeria (CJN) Is Not Above The Law! No One Is! 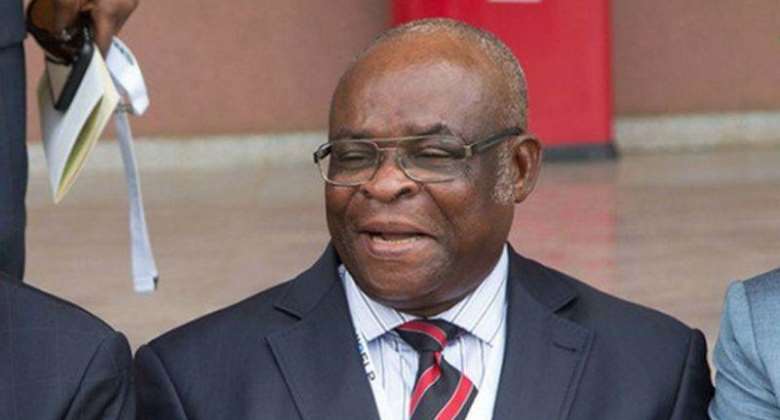 There is a legal maxim and mantra which every lawyer knows or ought to know. It is that, "Those who come to equity, must come with clean hands".

In plain English, the primary meaning of this, is that, persons who seek benefits from The rule of law and due process, the legal system, must themselves respect same.

Lawyers and judges must at a minimum, aspire to be the objective and unbiased purveyors and arbiter of justice, respectively. Impartiality is key!

Justice must not be for sale, or appear to be for the highest bidder! Law and equity must be dispensed without the appearance of elitism and without regard to social stratifications.

It is the case that Nigeria is said to be corrupt, (broadly speaking) because lawyers and judges are often corrupt; and too often, justice is for the person who pays the most, or the person who is connected to those who are willing to pervert the course of justice.

Anyone interested in fighting corruption in Nigeria, must start from the lawyers, judges, police; before any, and all others in Nigeria!

The President of the Nigerian Bar Association Mr. Paul Usoro is currently on trial, and so also unfortunately, is the case with the CJN, Onnoghen within the same 30 days period of time. All conscientious lawyers and judges in Nigeria should feel embarrassment about the sundry allegations against Messrs Usoro and Onnoghren which give cause for pause, particularly, for anyone, who is a member of the honorable profession. And yes, I understand the presumption of innocence as provided in our constitution!

Everyone ought to be excited and extremely curious to know, whether the high balances or extraordinary amounts in CJN Onnoghen's bank accounts, including other property holdings, which cannot be explained by the CJN, as proceeds of his salary as a Judicial Officer, maybe the need for convenient forgetfulness.

How did Nigerian lawyers and judges, members of the honorable profession, fall so far from grace? How did Nigerian lawyers and judges become so subjective, to the extent that serious allegations are now met with, "others are doing it", "we are not the first to do it", and "I should not have been arrested at night". Furthermore, "the filing of charges were too speedily undertaken"!

Everyone should like speed and efficiency, that is what I expect of every government agency, ministry or institution, and speed, accuracy or efficiency is what I also expect when I interact with banks, telephone companies, restaurants, airlines and sundry entities in Nigeria.

But sadly, speed, accuracy, efficiency and effectiveness have suddenly become words or active adjectives which Nigerians must view with derision, as part, or as a result of the CJN controversy.

In an article published in October 2016, and titled, "Nigerian Bar Association Goofed on the Arrest of Judges" I stated my firm belief then, as I restate now, that any government in Nigeria which seeks to tackle, decimate, fight and kill corruption, must start such efforts from the lawyers, judges, and sundry law enforcement agencies.

In Nigeria currently, there is a need for certainty of reward or punishment, dictated by the conduct of the citizens. Looters, plunderers, pillagers currently hold sway, as they are celebrated by a majority of our nation.

Quite unfortunately, the average citizen is aware that justice is too often perverted, twisted and warped; these, being the consequences which arise after justice has been sold to the highest bidder.

The consequences of these, are increasing lawlessness and chaos. Too many of our citizens use self-help or take the laws into their hands. This, arising from their conclusion based observations, that justice is unnecessarily and agonizingly painfully slow. Some even dare others to go to the police or go to court, not because the facts are on their sides, but, a result of their familiarity with perversions, through delays and briberies.

In Nigeria, there needs to be a CONSEQUENCE FOR STUPIDITY... This is because when consequences for stupidity are not so clearly stated and implemented, stupidity becomes all too common and even pervasive, as is currently the case in Nigeria!

When there are known consequences for stupidity, citizens will avoid stupidity as if it were a plague like Ebola or HIV/AIDS.

If Nigerians and Nigeria neglect or refuse to kill corruption, corruption will kill us. Corruption has just about killed us as individuals, as it has stunted our national growth. There is a corruption factor, or a so-called Nigerian factor in every activity nationwide.

Nigerians and Nigeria are desirous of eliminating corruption, and yet, some of us appear to have no desire to fire a shot at our common national enemy? Even worse, it is the case that some of us, are willing to tie the hands of those who would fight corruption behind their backs, even though these fighters have been willing and able to fight corruption on our behalf!

Nigerians must take a deep-breath collectively as we must restrain ourselves from leading Nigeria into combustion and implosion.

The Chief Justice of Nigeria is not above the law; and, Judicial Officers have no immunity from trials or prosecutions!

But, quite unfortunately, on the CJN Onnoghen controversy, many discussants and commentators have created the impression to the effect that CJN Onnoghen, and for that matter, Judicial Officers in Nigeria, have immunity from prosecution or are covered by some special dispensations not within the Constitution of Nigeria.

Those who have perverted, twisted and warped the primary reading of Section 308 of the Constitution of Nigeria in the past, are seeking to similarly misinterpret the primary interpretation of the constitution regarding, and in connection with the Nigeria Judicial Council.

Too many Nigerians appear currently, to be sleep-walking toward the precipice! Some Nigerians are unwittingly creating apocalyptic situations and conditions for political and constitutional crises.

Nigeria could implode into anarchy and descend into extreme chaos; or could even disintegrate if these unnecessarily idiotic behaviors continue unabated!

If a Judicial Officer anywhere in Nigeria were to rob a bank or rape a neighbor's wife, the NJC Rules would not apply as these are criminal/ illegal actions/activities not just in Nigeria, but anywhere in the world!

This is so, as these sundry actions/wrongful activities are not within the purview of NJC Rules!

The NJC Rules were intended to forestall or prevent Judicial misconduct and perversion of the course of justice by Judicial Officers in the performance and, during the discharge of Judicial DUTIES...not Bank robberies, rape or illegal demolitions and racketeering!

Are Constitutional crises looming? No Coups please! If we don't like the Constitution, let's amend it! No need to burn the house down

Professor Itse Sagay SAN and Barrister Robert Clarke SAN are among those who have dissented from the motley crews and bands of lawyers gyrating in the CJN controversy, too many of them giving mutually exclusive and contradictory, partial and biased interpretations of the Constitution of Nigeria and sundry laws. The CJN Onnoghen controversy has become a national circus, with too many clowns!

Nigerians and Nigeria want to fight corruption, and yet, it is clear that too many, among the lawyers and the judiciary in Nigeria would rather deploy the rule of law and due process as a shield to collaborate with the looters and pillagers of Nigeria.

Nigerian lawyers and the Nigerian judiciary deemed Mr. James Ibori of Delta State a fine gentleman, and declared him an angel, until he got to Britain and we all know that Nigeria knows the rule of law and due process more than those in British Legal System do, which is why Britain mistakenly jailed James Ibori, right after he was cleared of sundry criminal charges in Nigeria!

The fact that Nigerian lawyers and judges know and practice the rule of law and due process more than anyone else on earth, is the reason why a former governor in Nigeria was granted a permanent injunction, which restrains prosecutors, perpetually from bringing any criminal charges, ever, against that former governor!

The exemplary practice of the rule of law and due process in Nigeria, by Nigerian lawyers and judges, are the reasons why it took 11 and 14 years to bring Joshua Dariye of Plateau state and Mallam Ramalan Yero of Kaduna state respectively, to trial and conviction.

Further, it is this same wonderful environment in which Mr. Kalu Orji, and many others remain on trial on and off, for 10 years and indeterminate periods.

CJN Onnoghen is indisputably not a poor Nigerian by any standard, and yet, 90 Nigerian lawyers, more than half of that number, Senior Advocates of Nigeria, no less, have in a stampede offered free legal services to the "incorruptible" CJN, who can obviously afford to hire any lawyer at any price! What a circus!

Meanwhile, in the same Nigerian society, there are upwards of 200,000 citizens, all of them, presumed innocent by our constitutional legal standard, endlessly, awaiting trials in Nigeria!

Nigeria has become so perverse and crooked, indulgent of criminalities! A sitting governor invokes immunity from prosecution or some twisted sense of executive privilege to constitute himself into an embodiment of obstruction of justice at 1:00AM in the morning as he interferes with an attempt to arrest a judge by law enforcement agencies. It should be noted that this governor is a lawyer in this same rule of law and due process environment.

Another governor disrupts a court in session; this governor too, is a lawyer, who must be assumed to understand contempt of court; and perhaps the meaning of contempt with impunity?

Furthermore, two governors, both of them lawyers, have publicly advocated the breakdown of law and order, all this, in their efforts to give ethnic and regional flame-throwing colorations to the CJN controversy! The Constitution of Nigeria says governors of states are the chief custodians of law and order in the state which such governor governs! I know the rule of law and due process, but, Nigerian lawyers and judges are currently turning these ideas upside-down on their heads!

The CJN must attend trial and have the opportunity to be heard or defend himself! He may not arrogantly absent himself. He must respect the law and legal system as any citizen of Nigeria.

The CJN must actively participate in the litigation of his guilt or innocence as would any citizen.

How can it be logical or even fair, to have the CJN refuse to address allegations against him, neglect and refuse to attend trial to defend or clear his name, as he is assumed innocent, and yet, he has for decades regularly and often, determined the fate of fellow Nigerian citizens? Such an act amounts to a slap in the face of the rule of law and due process, An insult to all law-abiding Nigerians! Unless anyone thinks that CJN is above the law, he is not, no citizen is above the law!

Nigerians must shield their swords; let the CJN and the criminal justice system in Nigeria determine his guilt or innocence. The public, the lawyers, and the journalists must restrain themselves!

If Nigeria burns, there are always unintended consequences, in situations or instances such as these, we all may be crushed by the falling skies, and we may all be consumed by the fires which are currently being carelessly, recklessly set!