No escape: Hunted down by Al-Shabaab in Nairobi attack 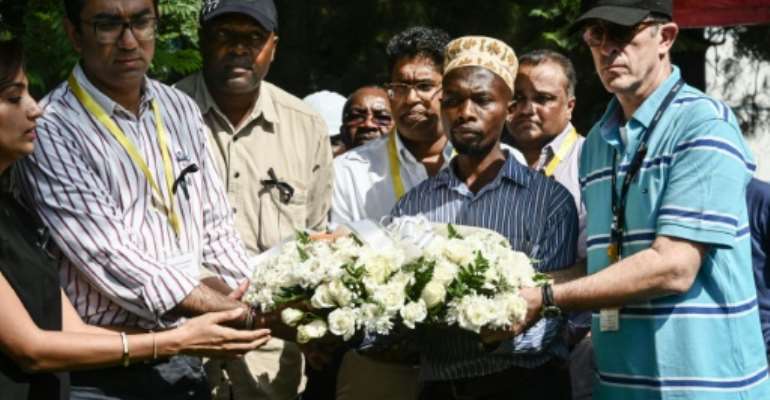 DusitD2 hotel General Manager Michael Metaxas (R), a survivor, placed a wreath with other staff at the gate of the complex in Nairobi where 21 people were killed. By Simon MAINA (AFP)

"I think we are going to have to fight these guys", Ashford Maina told his colleagues, as Al-Shabaab gunmen closed in after chasing them through their office building.

A moment later a gunman flung open the door to the group's hiding place -- a men's toilet -- and pulled Maina out.

"They've taken Ashford and we heard gunshots," one of the employees wrote in a message to colleagues at telecoms firm Cellulant.

Maina, 36, head of product development at the firm, had been killed.

He was one of six staff to be murdered in the attack at the Dusit hotel and office complex in Nairobi last week.

The harrowing tale of Cellulant employees fleeing in terror was recounted by their chief executive Ken Njoroge at a memorial service in Nairobi on Tuesday.

Njoroge pieced together the events from staff present that day at the Cellulant offices, spread over the fifth and sixth floors of one of five office buildings in the complex.

"I think sometime about three o'clock the teams heard the first explosion," Njoroge said, as a suicide bomber blew himself up outside the Secret Garden restaurant, where at least five of the 21 victims were killed.

A second explosion followed shortly thereafter, accompanied by gunfire. Police have established there were four gunmen along with the suicide bomber.

Shooting as they fled

Njoroge said scores of employees made it out through two exits before the gunmen entered the building.

"I think one of the gunmen... realised there were people (going) out of the exit... he took an elevated position and started to shoot at people leaving the building."

At this time 17 staff members were still stuck inside.

A group of six sought refuge on the first floor, hiding in a small room under the stairs.

"The rest of the group ran upstairs to the fifth floor and could feel someone shooting at them as they crossed from the exit back into the office," said Njoroge.

He said that in the offices, "all glass and very open", the only place of refuge was the washrooms. 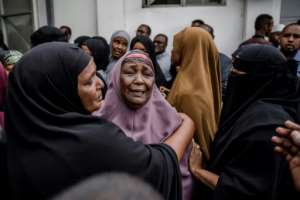 "I think one of the gunmen, maybe two, followed them up, they... broke the glass door into the office and went into the washrooms, flung open the men's room (door) and our colleague Ashford was there and they grabbed him and pulled him out."

After shooting Maina, the gunmen tried to force their way into the ladies room, where those inside strained against the door.

Njoroge said the women had recounted that one of the gunmen kept saying: "We know you are in there, open up".

"For some strange reason they left," after a while, he said.

Meanwhile from the small room under the stairs, the six hiding inside sent messages pleading for help as gunshots came closer.

"They could feel the gunman walking the stairs, and described it as if this guy was walking on their heads, he was running his gun along the metal railing of the stairs," said Njoroge.

Inside, the five men had formed a wall around a female colleague and "tucked" her at the back "so nobody could see her", he said.

The gunman "opened the door, introduced himself as Al-Shabaab, and shot into the colleagues."

The women, who survived, said she had smeared blood on herself to play dead, as she lay among her five dead colleagues waiting for rescue.

Cellulant was one of the hardest hit companies in the attack, with the Dusit hotel itself also losing six staff.