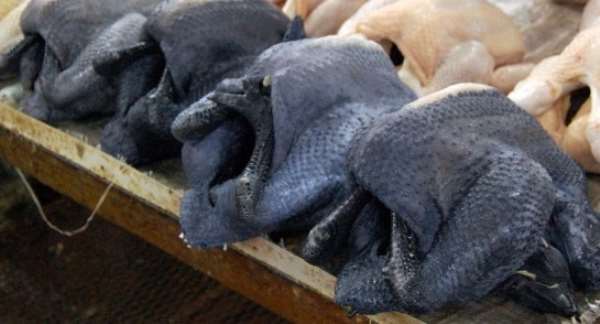 In regards to food, the Chinese are known to eat almost everything edible on earth, including snake, frog, dog, reptiles, fried pupa etc, however, the Chinese have added another special breed of chicken to their menu, an unusual breed of domestic birds with black bones and even black internal organs.

The breed called Chinese silky has very soft fluffy feathers, and inside it differs from other chickens in the sense that it has a skin of a bluish-black shade, dark meat, as well as black bones.

In the West, Chinese silky chickens are bred as a rule for decorative purposes, but in China and some other eastern countries their meat is considered a delicacy and is not available to everyone.

The breed has been known since the 7th century, and it is believed that eating these chickens, known in China as gu chi, 'chicken with black bones,' has a beneficial effect on human health.

For example, Chinese women traditionally eat Chinese silky chickens after childbirth to restore energy, in addition, the Chinese say that black chicken dishes have a positive effect on blood, lungs, and the stomach.

As a rule, so that the meat of gu ji fully manifests its unique properties, it is used to make broth with the addition of ginseng, dried wolfberry, and Chinese dates, and such hens are rarely fried.

In 2011, genetics discovered that the unusual color of the meat and internal organs of these birds, a phenomenon called fibromelanosis, is associated with the mutation of the endothelin-3 gene, which is responsible for the development of pigment, producing cells, which causes an excessive amount of blackening of not only the skin but also the bones and the internal organs.

However, scientists have confirmed that there are unique healing properties in Chinese silky meat. There is an increased level of carnosine, a peptide, in the chicken which is sold as food additives.

People take carnosine to grow mass muscle, slow aging, diabetes, and even autism, and studies have shown that black chicken meat is one of the richest natural sources of this compound. Would you try it when in China?

Traditional Chinese medicine is one of the oldest treatment systems in the world, its history dates back over three thousand years and many of the treatment principles used by Chinese medicine recognized as effective are being actively introduced into the practice of Western doctors.