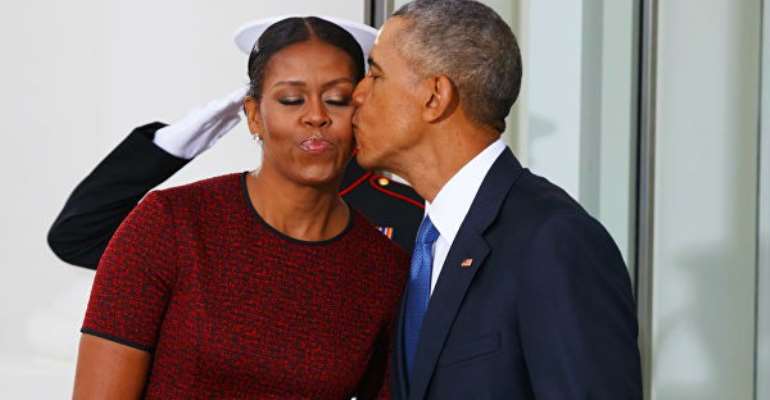 Michelle Obama, the former first lady, behind Barack Obama, is one of the most respected women in the world. Her love and respect for mankind have no boundary, yet her husband committed the most serious crime during his tenure in the White House in the year 2014.

Both Michelle and Barack Obama originate from Africa, one of the richest continents in the world, which treasures have been one of the reasons Europe and America have maintained a flexible economy today. Even Africa's artifacts weren't spared, they stole everything.

Unfortunately, Africa doesn’t benefit from its rich resources. Instead, the continent's resources have been a curse, leading to all kinds of cruelty against Africa. There is no continent in the world which has suffered such a great deal like Africa.

It has suffered domination and all kinds of cruelties, ranging from slavery, colonial brutality, Apartheid, the deliberate spread of diseases and the test of biological weapons. Thus, it was a hope for many black people around the globe, including Africa, that since Obama is the first black US president he will lift the image of Africa.

Unfortunately, it was a false hope. Obama under oath, swears to defend and protect the US constitution which involves the clandestine activities of spreading man-made diseases and the test of biological weapons.

Obama has no choice, he wouldn't like to be called a coward American leader, even when comes to the killing of his own parents in Africa. In the year 2014, the US government under Obama's administration opened the hell gate of Ebola on three West African countries of Sierra Leone, Guinea, and Liberia, in support of the US government biological project for global depopulation.

In one of Michelle Obama’s interview with NBC television, she said that Barack Obama is a perfect husband and father, but he often wins, playing tennis with his wife. “It's annoying,” said Michelle Obama.

The American mainstream media has played a vital role in assisting West Europe and the US governments in adding more crimes to what already Africa had suffered. If not, the journalist should have asked Michelle Obama: why angry with your husband for winning a tennis match, but happy about triggering Ebola on the poor citizens of Sierra Leone, Guinea, and Liberia?

No one cares about Africa, yet what many people have failed to realize on that continent is despite what Africans have gone through it has the lowest suicide rate in the world and they don’t kill themselves often with guns like the United States of America. Above all, despite the man-made diseases Africans are always happier than Europeans and Americans.

The US government thinks the administration has committed a perfect crime and now enjoying impunity but we need to remind Michelle Obama that everyone is aware of the crime her husband committed while in the White House in the year 2014. The challenge and accusations are all over the internet.

Obama passed through the most unpleasant situations, including racism, hate, and discrimination during his political campaign and after becoming the first black president of the United States of America.

To reduce or eliminate that hatred, Obama did both evil and good things to please the world and Americans. The killing of Africans with Ebola, as a bio-weapon, for the military defending purpose, is one of the evil things Obama did under his administration.

The media, including the CNN and the BBC, have failed to give the right information about Ebola, what they are interested is in the first week more than 1.4 million copies of Michelle Obama’s the book were sold becoming a best seller.

It might be that the US government mocks the bible each time they say “In God we trust.” If they do, we don’t because they scripture says: “Jehovah hates a lying tongue and hands that shed innocent blood."

According to the World Health Organization, a total of 28,616 cases were recorded and 11,310 deaths were reported in Guinea, Liberia, and Sierra Leone, therefore, as we know, Michelle Obama, your husband has blood stain in his hands.

The media can refuse to publish the truth about Aids and Ebola, the US government can play it tough as a superpower and Obama can pretend that he hasn’t committed any crime but we believe in God and what’s written in the bible.

“Be not deceived; God is not mocked: for whatsoever a man sowed, that shall he also reap,” Galatians 6:7. Therefore, Michelle Obama, please, don't forget.