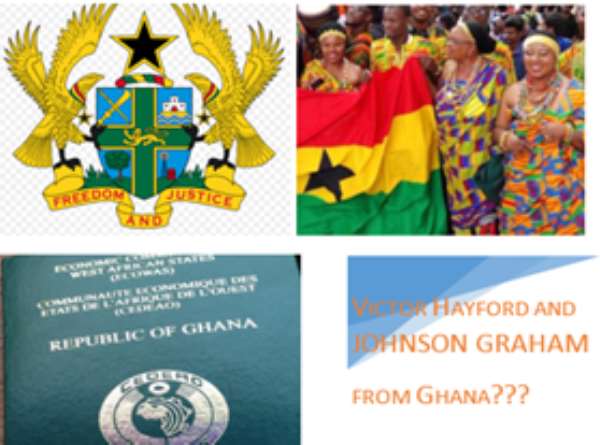 Two years ago, I met some colleagues at the Ghana community in East London and I was in no hesitation to ask their names and where they come from in Ghana. “Hey guys, I am Kwaku Addai from Offinso. What are your names and where are you from?” I asked keenly. Three young men and one lady in their middle twenties drew closer to me and replied one after the other with some British accent. “I am Victor Hayford Smith, from Kumasi”, “I am Johnson Graham from Sunyani”, “I am Harry Jenkins from Ejisu” and from the lady “I am Linda Johnson-Francis, from Cape-Cost”.

The names I heard prompted my interest to write an article about how Ghanaians are losing their national Identity and core values. No wonder that the moment you tell someone in Europe that you are from Ghana, the next thing they mention is “Asamoowah Gian”. Meaning you are only recognized by the existence of Asamoah Gyan. They have no idea about what Ghana is and where Ghana is. I began to wonder if any Briton would ever name his or her baby Mawuli Annan, Nkrumah Anokye, Baah Acheamfour, Tetteh Quashie, Fuseina Assibi or Asantewaa Mansa.

National Identity defines some unique traits or values of a set of people in one country from another. Our sense of belonging to a particular nation is embedded in our traditions, politics, creativity, languages and accent, names, the food we eat and among others, and the way we interact with one another. Rupert Emerson, a political scientist, defined national identity as “a body of people who feel that they are a nation”.

African countries were not the only countries that were colonized in the world yet the effect of colonization is mostly felt and seen in the sub-Saharan Africa than the rest of the former European colonies in Asia.

Peter Mandler, in a journal article published at the Cambridge University Press, defined “National identity” as one of those concepts like “political culture” Mandler, Volume 3 Issue 2 (2006). Right! As soon as someone says he is from North Korea, what probably comes into your mind includes Kim Jong Un, political Ideology and nuclear missiles. Say he is from China, you will begin to imagine the communists, the growing economy and the influx of inferior goods to Africa.

Generally speaking, people from the Far East countries have unique eyes, height, hairs and the general body structure which make them easily identified irrespective of any political culture. The way they uphold their beliefs and their country lures me a lot. Their names are intact. When you hear Yu Xin Li, you quickly know that he is from China. Kashimoto Honda, Japan and Viet Nguyen, Vietnam. How come do we give names like Victor Hayford Smith, Johnson Graham and Linda Johnson-Francis to native Ghanaians?

Ho Cong is the Logistics Manager at CARLSBERG VIETNAM. In his article titled Does cultural identity get lost due to globalization? Mr. Cong stated that Vietnamese identity is always preserved no matter the influence of western culture and trade benefits. Though he admits that his fellow countrymen who speak good English get trade benefits or job opportunities than others.

“Vietnamese mother tongue never disappears or loses because of its valuable quintessence, rich nuance and aesthetic values that many Vietnamese generations have built. Another example can be seen clearly between American and Vietnamese culture. Although American culture influences upon the way the young Vietnamese behave and has some impacts on the old system of habits and customs, Vietnamese identity is still intact”, Cong (2014).

When you meet nationals of other continents, they mention their country names with pride and confidence. “I am from Great Britain, I am from France, I am from South Korea, I am from Brazil” and so on. They always insist on their national favorite dishes and speak their languages with confidence.

In Ghana today, our local languages and dialects are either crashing out or mixed with English. Most university graduates and people in the top positions in the society are the main culprits of the mixture. Examples of such nuisance are “fa sugar ma me”, meaning give me some sugar”, “Me die I think se wontumi ncompare abibifo to whites” meaning you can’t compare Africans to the whites. Wake up Ghanaians!

Some effects of losing our national identity include loss of patriotism, loss of confidence in ourselves and the nation, loss of core values and loss of economic benefits; rejection of local products and indigenous jobs. Other effects include difficult interpersonal communication, loss of natural identity and respect.

By Charles Addai, Finland.
Send your comments to [email protected]

Why won't National Security operatives assault journalists i...
33 minutes ago