War on weight is more a battle within 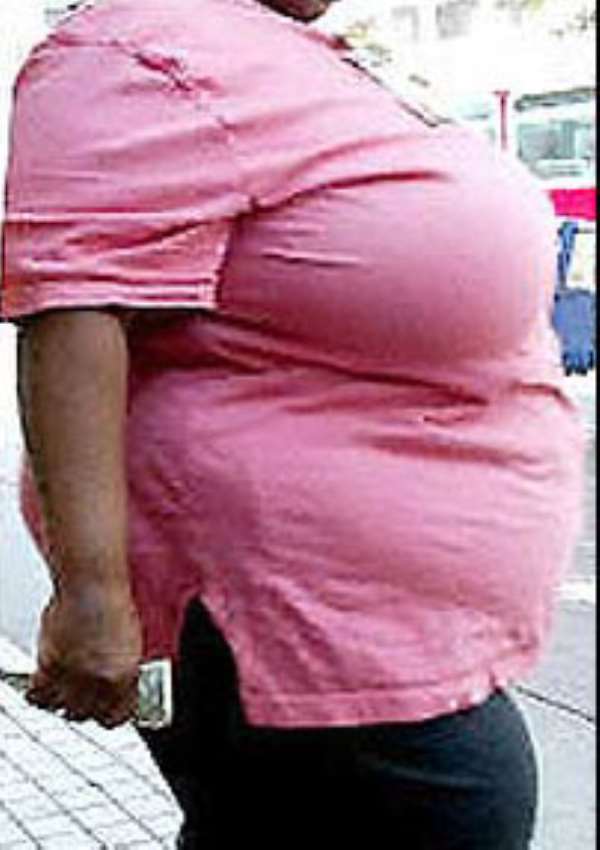 ..Why many Ghanaian women overeat as a means of control ALMOST half of Accra women are seriously overweight, according to a recent Ghana Democratic Health Survey, with 46 percent of women in the capital classified as 'obese'. Being overweight can increase the risk of heart disease and failure, lowering the likely age of a first heart attack by between four and eight years, the Director General of the Ghana Health Service warned at a recent press conference. The people of Ghana are putting their health and even lives at risk through their harmful eating habits – and it is women in particular who are overeating.

The statistics are concerning, but less surprising: this is not the first time the unhealthy status of most women in urban areas has been headline news in Africa.

The first South African Congress on Obesity took place just about this time last year (late in October 2004) in Johannesburg. The audience learned that half the women in the new Rainbow Nation were obese.

According to a survey conducted then at Johannesburg Hospital, one out of every three men and one of every two women are obese, putting the Sun City on a par with American demographics for first prize in numbers of the fat and flabby. Heart disease is a new killer and adult-onset diabetes is now increasing at a rate of 98 percent.

And now Ghanaian women are catching up in tipping the scales.

The difficulty for treating obesity in women young and old is that we in Africa generally disregard the role that excess weight plays in the psychology of being second class in a modernising society. This is especially problematic under highly conflicted conditions of rapid change in social roles as exist, for example, in post-apartheid South Africa.

People respond in many different ways to excess stress and anxiety. But the particular stresses placed on women psychologically in widely different societies readily lend to maintaining excess weight as a form of coping and protection.

Psychologist Susie Orbach is co-founder of the Women's Therapy Centres in New York and in London. She specialises in the treatment of compulsive eating. Paraphrasing and excerpting from her essay, “What is fat about?” Orbach explains that women stay fat not because they lack will power or self control. “Women generally carry a large burden of responsibility in widely diverse societies. They are often expected to go beyond the typical roles of femininity set for them in different ways by different societies. Women are not supposed to look for nurturance from those around them; women rather provide nurturance, emotional and sexual. Women satisfy male needs. Typically fulfilment does not transfer the other way around, except insofar as 'satisfying a woman' sometimes factors into the sense of male virility. But then it is very many women he is supposed to satisfy; so again, it is not women's needs that are being met in the scenario of the husband or single fellow who fills the image of the 'lady's man'.

More significantly, women are often expected to fulfil both the male and female roles in child rearing, nurturing, home maintenance, income support. They are also typically the most vulnerable as victims of anti-social behaviour.”

Orbach explains that for any special exercise of social power that women are obliged to perform, women are rarely rewarded because in being independent, strong, and capable, women are violating prescribed social roles. This is true especially in industrialised cultures whose norms and images of ideal womanhood are globalised.

She observes that for women especially, “the fat/thin dilemma” is often a way of negotiating the conflict between being capable, resourceful and powerfully independent on the one hand, and being desirably helpless and attractively feminine on the other.

It is useful when dealing with the struggle to lose weight that the struggle is not just about pounds. Overweight is a physical symptom about which most women have some control. “Giving up a symptom and owning the power assigned to it means you are taking yourself seriously. Taking themselves seriously is a risky business for women.”

Dr Orbach argues that compulsive eating is related to the unconscious desire to be separate, to withdraw or avoid sexual vulnerability and aggression, to contain anger, to avoid feelings of hurt and disappointment, to keep people at some distance, to feel substantive and self-reliant. Women are not entitled to own that they can and do fulfil these desires; instead the fat does it for them. Staying fat is a way of maintaining these unacceptable behaviour patterns whilst fulfilling the devalued social image of not being powerful, not being in control, not being capable. Women are left alone provided they bear the brunt of a negative self-image, which fat very suitably affords in affluent societies where food is abundant.

Orbach points out that “the very words 'mother' and 'wife' conjure up self-denial while the alternative images of female - 'career woman', 'single parent', 'unmarried' - provoke hostility, suspicion and ostracisation.” These images are true in low-income cultures where food is scarce. The pressure to please men remains; if men prefer women big, they must be big. If men prefer women slim, they must be slim. In cultures where slim is associated with being sexy and unscrupulous, while being fat indicates one is reliable, maternal, and unattractive, women assume the roles they are assigned and bear with the self-images that go along with those roles. Spelled out the oversimplification is glaring; still these are influences that keep women from losing weight although they may consciously want and strive to do so.

In traditionally rooted cultures impacted by western values women are at special risk when they face the wide assortment of transforming identities and images of success that exist as impressions of 'advanced' or 'modern' culture. Deviation from the norm can leave one truly stranded, even branded a witch. For women, losing weight is in large part re-appropriation of your power, which has been given over to the fat. This involves a re-evaluation of oneself. Re-evaluating oneself, owning up to one's ability to feel, to be hurt, to have needs, to seek fulfilment are all tremendously taboo areas for women to venture into even in fantasy, let alone in the real visible world where the body is present for others to see.

Orbach proposes “that the fat itself does not actually do the job it is meant to do. By attributing to the fat a powerful protective role, or de-sexualising persona, or the ability to wipe out bad feelings, a woman sets herself up for a situation in which a life without the fat would be an emotionally defenceless and sexually vulnerable one. This is frightening.”

Changing weight involves changing self-image, and changing the way one responds to the world. It is a bigger deal than all the talk about 'will power' would ever let you believe.