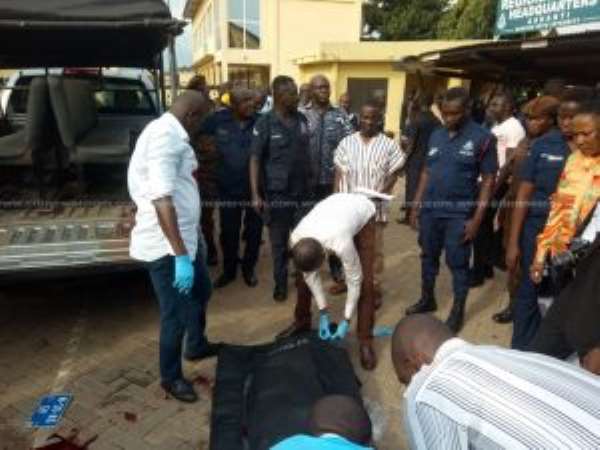 Some Twenty-one (21) police personnel have been interdicted and are to be subjected to a formal criminal investigation, for their alleged role in the killing of seven Zongo youth at Manso Nkwanta in the Ashanti Region on July 17, 2018.

This comes after the seven-member committee which probed the killing stated that it found no evidence that the deceased persons were armed robbers.

The Committee also said there's no evidence that the deceased persons exchanged fire with the police before they were killed.

The initial findings of the committee were made public by in a statement issued by the Information Minister, Kojo Oppong Nkrumah today, Monday, November 19, 2018.

“Government upon a careful study of the report has decided as follows, the twenty-one (21) police personnel involved in the incident who have been found to be the principal suspects be interdicted by the Police administration and be subjected to formal police criminal investigation into the matter” the statement notes.

The government in its statement also announced that in consultation with community leaders, it will provide support for the dependents of the deceased persons.

Background
The killings on July 7, 2018, triggered outrage and anger in Zongo communities in Kumasi with residents insisting on the innocence of the seven.

The youth blocked all roads leading to the area from the Kumasi Central mosque.

Several attempts by the police and opinion leaders to restore calm failed.

Even the Inspector General of Police and his entourage were at a point chased away by some irate Zongo community members.

A seven-member committee was eventually set up after days of angry protests over the killing.