By Imed Lamloum and Charles Onians 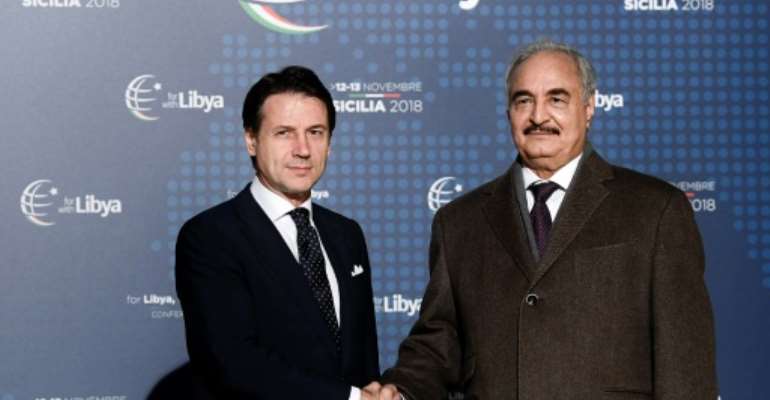 Conte (L) greeted Haftar upon his arrival in Palermo for the conference. By Filippo MONTEFORTE (AFP)

Turkey on Tuesday pulled out of Italian-sponsored Libya crisis talks saying it had been "excluded", dealing a fresh blow to the latest international bid to stabilise the chaos-stricken and divided country.

Turkey walked out after eastern Libyan strongman Khalifa Haftar joined a meeting on the conference's sidelines with his UN-backed rival Prime Minister Fayez al-Sarraj and other leaders, but not Turkey.

The Haftar camp regularly accuses Turkey and Qatar of militarily and financially backing his rivals, including Islamists.

"Any meeting which excludes Turkey would prove to be counter-productive for the solution of this problem," Turkish Vice President Fuat Oktay said in a statement.

"The informal meeting held this morning with a number of players and having them presented as the prominent protagonists of the Mediterranean is a very misleading and damaging approach which we vehemently oppose," Oktay said.

Haftar arrived in the Sicilian capital of Palermo from his Benghazi stronghold on Monday evening after days of doubts over his crucial presence, but snubbed the actual conference and a working dinner.

"Unfortunately, the international community has not been able to unite this morning," Turkey said.

Italy is the latest country aiming to bring Libya's disparate and often warring factions together after a Paris summit in May saw the Tripoli-based Government of National Accord (GNA) and Haftar agree to hold national polls on December 10 -- a date which has fallen by the wayside. 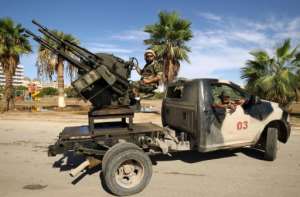 Acknowledging the chaotic political situation since dictator Moamer Kadhafi was deposed in 2011, the United Nations last week conceded elections will not be viable at least before the spring of 2019.

An Italian official said that during Monday's talks on the margins of the conference, Haftar told Sarraj that his rival did not need to resign ahead of the hoped-for elections.

"You don't need to change horse in the middle of crossing the river," the official quotes Haftar as saying.

Haftar, whose forces control all of northeastern Libya, refuses to sit down at the same table as the Islamist leaders he fiercely opposes, militarily and ideologically. 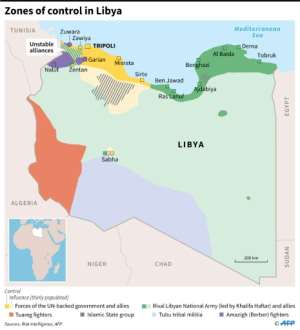 Analysts say the Sicily summit risks being compromised not only by tensions between Libyan factions but also the competing agendas of foreign powers.

Just as in May, the key Libyan invitees are Haftar, the eastern parliament's speaker Aguila Salah, GNA head Sarraj and Khaled al-Mechri, speaker of a Tripoli-based upper chamber.

UN envoy Salame told the Security Council on Thursday that a national conference in early 2019 would be organised to provide "a platform" for Libyans to spell out their vision for the future.

But diplomatic wrangling between Italy and France also hangs over this summit.

Salame's deputy Stephanie Williams on Monday hailed the GNA's moves to secure Tripoli since then but said more must be done to "generate regular forces ready to assume security responsibilities in the capital". 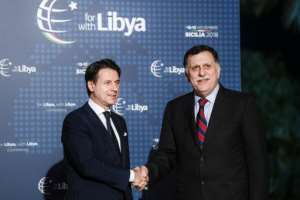 Sarraj (R), seen with Conte (L), went into a meeting with Haftar after their arrival. By Filippo MONTEFORTE (AFP)

Italy has not been alone in pushing for elections to be delayed. December 10 was also viewed sceptically by Washington and Moscow.