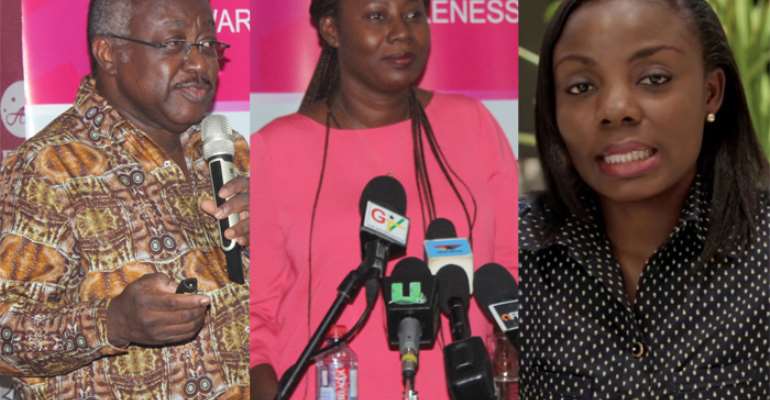 The Breast Unit of the Korle-Bu Teaching Hospital (KBTH) has debunked myths associated with breast cancer risks, diagnosis and treatment.

Taking turns in various presentations on breast cancer at the Breast Cancer Information Day held in Accra, the breast cancer experts advocated regular examination of the breast as it contributes significantly to treatment outcomes.

Dr. Josephine Nsaful, a member of the breast team, explained that the more advanced a breast cancer is, the lower the survival rate.

Dr. Nsaful, however, added that a Stage III to IV breast cancer is much lower with 22 to 72 per cent survival rate.

She revealed that breast cancer treatment varies from one patient to the other, indicating that a treatment option that would work for one patient might not be suitable for another.

Dr. Nsaful further mentioned that like everything has its side effects, so also does the cancer treatment, adding that after treatment the patients continue to live their normal lives.

She, thus, clarified the myth that chemotherapy is a machine, saying it is a medicine given through IV or taken orally.

Prof. Clegg Lamptey, a breast cancer surgeon at the unit, highlighted that there is nothing like a normal lump in the breast, adding that although not every lump in the breast is cancerous it should be checked and if possible removed.

He further pointed out that women should look out for signs such as a change in the breast size around the nipple, on the skin, bloody nipple discharge or sores.

Prof. Lamptey said scans and x-rays and pathological test are often used to diagnose cancer, adding that from age 20 every woman should examine the breast once a month.

He also debunked the myth that having breast cancer risk factors necessarily means one will have the diseases.

Dr. Naa A. Aryeetey, also a member of the team, revealed that genetics, age and child birth have influence on an individual getting the disease.

She said one stands, for instance, at risk of getting the disease if a family member has the diseases, aged above 50 years.

She indicated that oestrogen regulating contraceptives also has a small risk of causing breast cancer, indicating that most breast cancers are painless.

Mrs. Doris Okai, a breast cancer survivor, who shared her story, revealed that she found out she had the disease about five years ago when she developed a boil in her armpit, which turned out to be breast cancer.

“I had the mastectomy then after six weeks I had chemotherapy. Fortunately, mine was oestrogen-based breast cancer so I was put on medication for five years and five years was last April when I stopped taking the medicine and I given other medicine.

It was not easy but I had my family, friends, church members praying and supporting me the way I wanted and I was able to fight breast cancer,” she narrated.