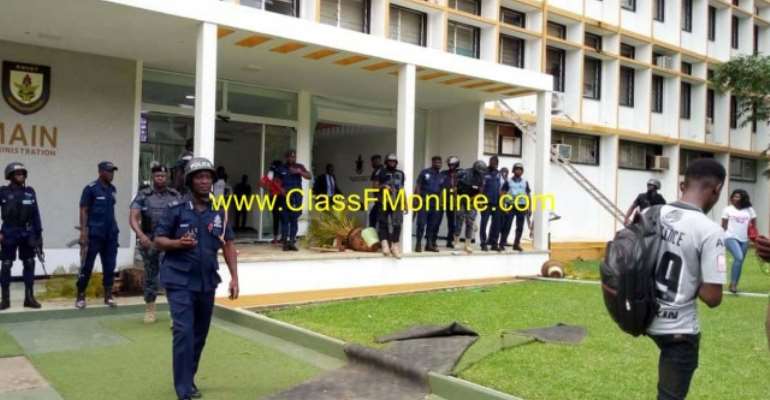 The Ashanti Regional Security Council has shut down the Kwame Nkrumah University of Science and Technology (KNUST) Indefinitely following vandalism and riots by students today.

The regional security council has also imposed a 6 pm to 6 am curfew on the school enclave.

The University's Public Relations Officer, Kwame Yeboah, who confirmed the decision said the decision was taken after a meeting between the university authorities and the Ashanti Regional Security Council (RECSEC).

Students have been given a 12 pm deadline to vacate the campus on Tuesday, 23 October 2018.

Ghanaian students are to go home until further notice while foreign students remain on campus.

Background
The Students' Representative Council (SRC) of the Kwame Nkrumah University of Science and Technology (KNUST) begun its demonstration today [Monday 22nd October] in protest of the university's management following the arrest of 10 students and one alum of the school.

The executive council of the SRC said the demonstration was necessary to end the management's neglect of students.

The students were arrested for a holding vigil on campus last Friday without permission according to the school authorities.

One other student who was allegedly manhandled by the internal security is currently on admission at the KNUST hospital.

The KNUST management however justified the arrests.

The University's Public Relations Officer, Kwame Yeboah said the affected students did not seek permission before undertaking the vigil, contrary to the rules of the university.

“The university thinks certain activities in the night should not be entertained. Some other activities are permitted because the students applied for permission. But there was no permission for last Friday's activity. The students decided to go their own way. They decided not to obey any rules or regulations on campus, and the law doesn't permit that. So when it happened, the police were brought in,” he said.