Do African Leaders Listen At All? 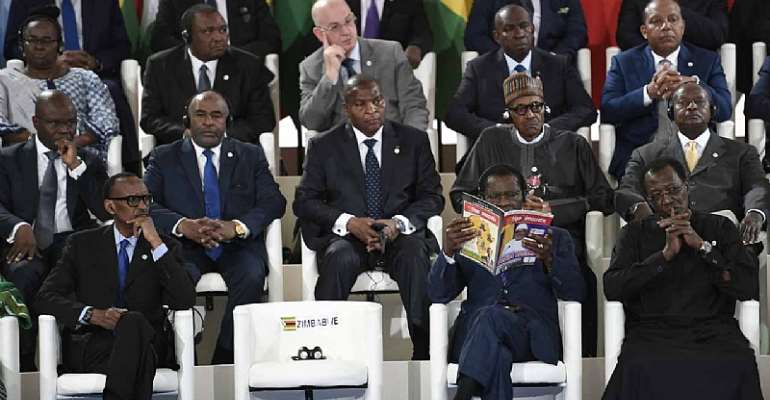 All across the continent, there seems to be a simmering movement among young people to challenge their leaders because of unemployment. Sadly, from the body language, utterances and policy announcements, it does not look like the governments are providing the answers. This is because they are not listening. But, if they cannot see, don’t they hear? Should they wait till young people hit the streets before they know things are not going right? Is it not about time that they listened to experts on what to do with policies?

The young people are also not looking at the problem through the right lenses because of the argument that, changing older people in leadership is all that is required to change the continent. This point does not hold because, if young age was all that was required for leadership, Africa’s problems would have been ended long ago by the idealism of the same old people who were younger when they took over power. Uganda’s President Yoweri Museveni, Cameroun’s Paul Biya and former Ghanaian President, Jerry Rawlings were all young at the time they became leaders. Unfortunately, their ages did not help then. The lesson learned from this is that, it is not age that matters in the affairs of governance, but real policy. That is why, when the experts speak, one would expect African leaders to listen. Sadly, they don’t seem to.

Amidst all the continent’s problems, a new study by the Alliance for Green Revolution in Africa (AGRA), the 2018 African Agriculture Status Report (AASR), says the lack of political will is preventing African countries from following the lead of Asian countries in using agriculture to spark widespread economic growth.

The report said, with the political will to support agriculture, African countries would have been able to “pair it with compelling visions, strategies and related implementation capacity for transforming their poorly performing farms”. AGRA President, Agnes Kalibata said experience and lessons have shown that with support to African countries, there could be change on the continent. This she said could be done through driving scale through a well-planned and coordinated approach to use resources in the public domain to build systems and institutions.

"Governments are definitely central to driving an inclusive agriculture transformation agenda. This body of work recognizes their role and aims to highlight the value of strengthening country planning, coordination and implementation capacity while supporting the development of an effective private sector and enabling regulatory environment," Kalibata said.

If only African leaders would listen, the new study says “catalyzing state capacity to drive agricultural transformation,” is the most comprehensive assessment to date of the role of state capacity and political will in achieving that “transformation,” a catch-all term for work required to boost production and incomes on the millions of small, family farms that grow most of Africa’s food—but where output often lags far below global averages.

The 2018 AASR looked at countries like China, South Korea and Ethiopia, Rwanda or Morocco, and concluded that, intensifying commercial production on small, family farms packs a powerful economic punch. “For example, China’s agriculture transformation is credited with kick-starting a rapid decline in rural poverty, from 53 per cent in 1981 to 8 per cent in 2001. The same is true for Ethiopia, 25 years of steady growth in the farm sector has cut rural poverty rates in half and in Rwanda, over the same period, poverty has reduced by 25 per cent.” Is this not enough proof that things must be changed on the continent. But will our leaders listen?

What is more, the report supported the claim that, “a consistent feature in each of these success stories is rock solid political support—led by heads of state, senior government ministers, private sector leaders and farmer organizations—for the ‘institutions, investments and policies’ that can unleash the economic potential of smallholder agriculture and local agribusinesses.”

If the older people are not listening, why will the young people not point out that AGRA is saying “successful agriculture transformation is a national agenda that involves significant contributions from other sectors, including finance, transportation, environment, energy and water. Together, they implement policies that create fertile ground for cultivating a new crop of local agriculture businesses.” This is the way to go!

It means that instead of thinking of a youthful revolution which will lead to nothing, young people should be pushing their leaders to look at directing their energies to targeted policy reforms, government capacity and an enabling environment for agribusiness which are what is missing from the agriculture sector of many African countries.

In order to bring about progress on the continent, the study said, there is reason for optimism in the increasing willingness of African governments to openly discuss where they are advancing in agriculture and where they are struggling. For example, 47 countries have signed on to the African Union’s Comprehensive Africa Agriculture Development Program (CAADP). And they recently submitted detailed reports outlining their progress to date in achieving a range of commitments made through the AU’s Maputo and Malabo accords. The report, dubbed the Biennial Review of the Malabo Declaration, re-enforced the link between government action on agriculture and reductions in poverty, with Rwanda posting the highest “agriculture transformation” score.

The study also noted that there is a growing number of smallholder farmers in sub-Saharan Africa who have moved beyond subsistence farming to become commercial growers, adding that, 85 per cent of Africa’s food is currently produced by smallholder farming households that generate a big enough surplus to sell 30 per cent or more of their harvests for income.

AGRA’s head of policy and advocacy, Boaz Keizire has commented that, the little changes seen in some of the African countries point to the fact that, “governments that are ready to step up their commitment to agriculture transformation likely have a core group of smallholder farmers who have the means and motivation to adopt new crop varieties and better farming practices.”

Against this background, the report has recommended that governments must communicate a clear and convincing vision of agriculture’s potential. This is because, political leaders need to make a compelling case that boosting productivity and incomes on smallholder farms can rapidly deliver food security and equitable economic development, at the same time putting their countries on a path to industrialization.

In addition, governments must approach agriculture as a long-term relationship, not a brief affair, which the report said, like a good marriage, political will to support agriculture involves not just the readiness to embrace its potential, but also the ability to maintain a steadfast commitment for the long-term—and in the face of multiple challenges.

To achieve success, it means governments, must face the challenges that include “poor civil service salaries and limited funding for operational expenses” that require fortitude to resolve. The report said, these “headaches can involve a range of issues, like a backlog of seed certifications, funding from donors that goes unspent, land disputes that remain unsettled and poorly administered subsidy payments.”

Thus, as the report said, there is the need to link up policies and investments to clear commercial opportunities for smallholder farmers. This means that, for agriculture investments to achieve their best results they must be attached to specific “agriculture value chains”. Only listening leaders will help put all these points to work. The experts have spoken and it is hoped it will not fall on deaf ears. These are really not times to brush aside words of wisdom on what to do on the continent, because we don’t have the luxury of time!