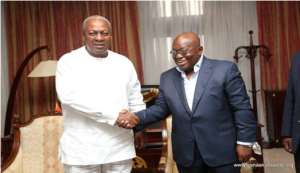 It could be well couched that the long awaited party election to elect the flag bearer for the National Democratic Congress [NDC] has seriously drilled a higgledy-piggledy in Ghana ever since the former President, John Dramani Mahama, on Thursday 23rd of August, 2018, gone viral in the excerpts of the allocution when he confirmed his judicial intents for vying as a flag bearer.

His come-back-theory-of-resolute is imminent by the bigwigs of the [NDC] and his acolytes of the Floating Voters Association of Ghana [FVAG], who have earmarked it as neither a surprise nor disturbances but a true calling which is indeed answered. Okay, unto those who believe he unearthed ‘domsorlogy’, granted immunity to officials who may have been indicted to have enjoyed impunity are still hooting and trolling him despondently after he had decided to context again. There were several tags which forced him to unreservedly nicknamed himself as the dead goat; meaning that he has heard the cries of the people and the vituperations levelled on him but frankly that would not ‘tie his bottom’. Reading from the radar, it is glaring that his come-back is actually to curb the current economic predicaments according to the opposition [NDC’s] belief which has erupted more fiercely than a volcano. So he has a new identity as ‘The Changed Man’ with a different perspective to accelerate the Better Ghana Agenda beyond Ghana beyond aid. In contrast, it appears almost that he has leaved an irreparably traces of mistrust on the minds of many Ghanaians, looking at the 53.35% he was waxed therewith. His willingness for contesting again stands tall after he has sacrificed the odds out and fully prepared to talk and walk the talk. If one has failed and been neglected in the paradigm of climbing the ladder of success, he would be inspired that man's failure does not mean his exploits have come to an end. The former President is really determined to make a difference; we wish him well.

There supposed to be an exigent contemplation born out of his return thereabout. Firstly, an inbound related quagmires and the likelihood of plunging the incumbent President to the Promised land of Ghana Beyond Aid. After leading the [NDC] into the whooping defeat in the 2016 election which they had never thought that victory would have gone beyond their reach, the party able men who may be far experienced and amazingly colossal and stupendous political ‘behinders' have given up of being behind-the-scene operators and are also eager to steer the affairs themselves in the coming 2020 Presidential elections than paying allegiance to the former President again.

They are Hon. Alban Bagbin, Mr. Sylvester Adinam Mensah, Mr. Ekwow Spio Garbrah, Pro. Joshua Alarbi Mensah, Mr. Kweku Richetts Hagan, Mr. Nurudeen Idrisu and Goosie Tanoh. These are scrupulous individuals that the former President have to beat before he could ones again hold the flag for the [NDC]. This is going to be herculean for the former President and he would not sail through easily. Remember, he had had the votes of all those austere men in the past but now their votes and the votes of their supporters would gleefully go to themselves and not John Dramani Mahama. He would obviously loss votes in the coming party election on December 7, 2018, making the flag bearer position itself not a done-deal! An insider could also speculate that they must not gamble with the future of the [NDC] until the historical massacre by the [NPP] is exterminated. And what if the party presents the former President and he is beaten again? It would postulate that they would forevermore suffer to elect a well marketing flag bearer if they did not excel and this would decapitate the party for a very long time. That is why probably there is the need to use a new face so that if perchance he is defeated by the incumbent President, coming 2024 he may have gained the trust of Ghanaians and could win the election because the good omen of the two terms regime in Ghana political history is not broken yet.

The remote constraint is rather a disguise sanitization of the ruling President’s administration. Truth must be told, albeit the infallible nature of President Akuffo Addo's regime, the magnitude of tempestuous and retrogressive growth the citizens of Ghana underwent in the erstwhile President John Mahama’s era was so brewing that got everyone talking about politics and became politicians in their small way, campaigning for the then opposition party [NPP] to triumph in the 2016 election, unlike some years back that people would declare their nonchalance for politics forthrightly. John Mahama's [JM] days got the barber talking, the hawker whining, petty-trader murmuring and the business jargon got tickled with the hardship thus it whittled the administration to a debacle. These are the things which the incumbent President is likely to capitalize on. He knows the end of the former President, so he may be poised to put smiles on the faces of Ghanaians in his capacity as the President to ensure that he is cherished from all classes of people. Imaging the young ones who just turned 18, enjoying the free Senior High, the first impression has been created and they might exercise their franchise for the incumbent President to impel the sustainability of the privileges they are enjoying. The President may be instigated to work earnestly to meet the basic standard of living within the few months left to augment what he had done previously. The return of the former President would mean a lot to him and thereby reinvigorating him to maintain his composure and keep his game plan tight.

The bigger picture is much clearer in the camp of the New Patriotic Party [NPP] as they have seen the beatable candidate showing bravados but would soon be beaten flawlessly again. Because he is beatable, the incumbent President knew how he plummeted him and ascended unto the throne, and to abdicate it for that same candidate he had beaten before may be the last option he might consider. The lesson he may have learnt would be the end notes of complacency. Already, he has won many hearts per the look of things and now that he has embarked on operation fulfil your promises which the Ghanaian compatriots are ‘Oliver twisting’ for more to be done. He may use the comeback of John Mahama [JM] to rev his unfinished project because the former President is known of some infrastructural developments he had started when his regime was about to experience a long hiatus. If the incumbent President stay aloof and did not complete those projects as well, there may be a propensity that John Mahama’s comeback would held a meaning. However, the [NPP], as wounded as they are, I would not be flummoxed if they leave no stone unturned.

The campaign promise which was touted as a folly-song-for-vote-buying is being launched and fully in fruition, ‘the Free Senior High’. Remember, the former President and the [NDC] had launched rebuttals to reduce this promise to razzmatazz and a pedestrian talk when the news broke eight [8] years ago but the moment President Akuffo Addo was given the mandate he had demonstrated that he shall forever be the living dog whose tongue has protruded, yearning for success!

Getting to 2 years of it being in fruition, the ordinary Ghanaian who if not the kind courtesy of Nana's initiative would have his ward denied basic education, and supposing if he is an [NDC] proponent, he may be introspective when he is behind the ballot box in 2020. This would make President Akuffo Addo acquire more votes since we are in the country that the poor outnumbers the rich and the poor are those whose children are the majority beneficiaries of the Free Senior High. Nation Builders Corpse would also play a vital role in this, looking at the 100.000 number of graduates it would be enrolling with the half a loaf stipend. The caboodle of graduates who might have suffered in the regime of the former president with the no-job-jinx may all invest their votes in order to shovel Nana Addo to the appease. There could be another argument the collapsed of the defunct bank which has already aggravated unemployment just in the few months would disadvantaged President Akuffo Addo but this may be flawed because the banks had collapsed owing to abysmal performance of its leaders they may have had and not entirely the economy. President Nana Addo would and had known the reasons why the former President aimed at contesting again and as we are not in the election season all he needs to do is to work overly more; fulfil his quest for reducing corruption by side-lining all public officials who are culpable; for example, those who contributed to the fall of the local banks, reducing drastically electricity tariffs, sustaining the free senior high, increasing the minimum wage rate, removing the feathers of the dollar, injecting more money into the National Health Insurance Scheme [NHIS], the galamsey menace being redefined to suit all Ghanaians and many more.

Imaging if President Akuffo Addo, in the supposedly less than 27 months to election honoured almost majority of his promises, what would the fate of the former President and that of the opposition party [NDC] head towards? President Nana Akuffo Addo would be singing the “we are moving forward election song” anytime former President, John Dramani Mahama reappears. So should the [NDC] maintain his flag bearer tactics or get a new face? It is a matter of contention for those in charge to robustly consider the chemistry it may generate.

We the compatriots are very happy for this kind of tough context since its propensity would lead to electing competent Presidential candidates for mother Ghana. Our dream is to see Ghana moved forward from chop-chop-and-talk-talk to a day that people would desire to be a public worker not just for the game as it is seen everywhere Ghana.

May the good Lord give us the good President to lead us, amen.