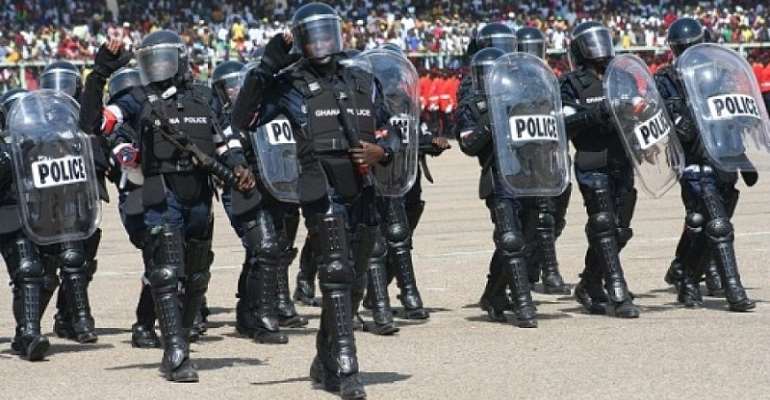 According to Chief Inspector Edward Afful, stressful behaviours and conditions of police officers is the cause of most brutalities in the country. He warned of dire consequences on personnel if nothing is done about the situation.

The Chief Inspector's revelations come after Patience Osafo was assaulted and battered by an armed police officer last Thursday at the banking hall of Midland Savings and Loans Company, where she had gone to cash her savings.

On Saturday, a policeman accompanying a bullion van accidentally shot and killed the driver of the van, in his attempt to ward-off mourners who had blocked parts of the Odumase Krobo road in the Eastern Region.

The police officer and his two other colleagues were heading to a duty post when the accident occurred.

It is against this backdrop that The Chronicle agrees with Chief Inspector Afful that though the conduct of some police officers is condemnable, he believes the welfare of police personnel must be taken seriously.

The Chronicle also believes that the psychological state of police officers should be checked.

We have arrived at this conclusion because if a person who isn't in the right frame of mind is given access to a weapon, there is a potential danger.

The Chronicle would like to emphasise that stress is a common factor in contemporary society, but the way in which it manifests is dependent on a number of different lifestyle factors for each individual.

Exam stress is common amongst school and university students, deadline stress can affect employees with targets to meet, and medical professionals can sometimes feel the strain of the intricacy and vital nature of their occupations.

To us at The Chronicle, it can be argued that the highest levels of stress are reserved for those people who assume the role of authority figures, in this case members of the police service.

Again, when you factor in the dangers that some police officers face, together with the administrative burden and the pressures of protecting the public, it is easy to see how stress has become a major problem for the police service.

The Chronicle has identified some sources of police stress, including but not limited to, constant exposure to people suffering distress and pain, threats to an officer's safety or health, the responsibility of protecting the lives of citizens and having to be in control of emotions even when provoked. Other sources of stress include the inconclusive nature of police work, the quick alternative pace of the job and the responsibility of handling a firearm or weapon.

Going forward, The Chronicle would like to appeal to the top hierarchy of the police administration to look for symptoms of police stress and deal with them urgently. We believe that fatigue, insomnia and restlessness, lowered sex drive and excessive drinking are some symptoms that may point to stress.

The Chronicle believes in the capabilities of the police administration to rise to the occasion and fashion out effective remedies for our men and women in black, suffering from stress.

But while we wait for that, The Chronicle would like to suggest that police officers should consider personal stress management in the interim.

Police officers should try to avoid using alcohol, nicotine and caffeine as coping mechanisms in an attempt to ease stress.

It has been established that engaging in an all round healthier lifestyle is a good way to begin reducing stress.

Also, police officers should not be afraid to say no, when they are limited in certain operations, while picking battles they can win.

A well composed police service is a requirement for a stable country and we must all help in achieving that.

I haven’t said NPP is Majority in Parliament – Bagbin clarif...
26 minutes ago