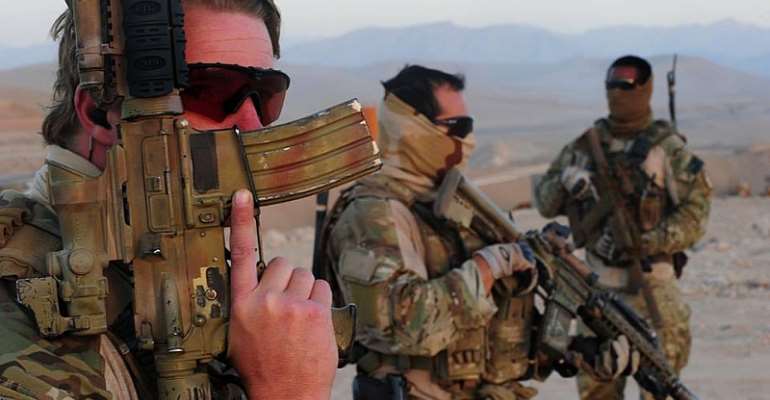 “Further into the Afghanistan mission, after multiple deployments, soldiers began to refer to members going ‘up the Congo’.” - Chris Masters, The Sydney Morning Herald, Jun 9, 2018

They operate with impunity in areas already deemed lawless by their civilising superiors. Afghanistan, derided as a country of anarchic sensibilities, was never going to be a place for those abiding by armchair rules. Whether it was the Soviet army engaged in strafing operations indifferent to combatant and civilian, or those subsequent intruders of the Global War on Terror – the forces of the US-led International Security Assistance Force and associated allies – the complement of atrocities was only set to grow.

The chief prosecutor of the International Criminal Curt, Fatou Bensouda, has had an eye on Afghanistan for some time for that very reason. In 2016, she claimed in a report that, “Members of US armed forces appear to have subjected at least 61 detained persons to torture, cruel treatment, outrages upon personal dignity on the territory of Afghanistan between 1 May 2003 and 31 December 2014.”

The Central Intelligence Agency was not to be left out sulking on the side, with Bensouda suggesting that 27 detainees in Afghanistan, Poland, Romania and Lithuania had been subjected to “torture, cruel treatment, outrages upon personal dignity and/or rape” between December 2002 and March 2008. A true smorgasbord of violence.

In November 2017, Bensouda concluded, after a seemingly interminable preliminary process, “that all legal criteria required under the Rome statute [of the ICC] to commence an investigation have been met”. The investigation specifically into the conduct of forces in Afghanistan, she suggested, would cover the alleged perpetration of crimes against humanity including murder, targeting humanitarian workers, and summary executions.

Afghanistan has again become the site of interest for the maligned side of human nature, this time from the Australian angle. The weekend began with Canberra in a tizz over allegations that Australia’s special forces have committed war crimes since commencing operations in 2001.

On Friday, Fairfax Media revealed certain contents of a report written by Defence Department consultant Dr Samantha Crompvoets in 2016 alleging the commission of such crimes suggesting a “complete lack of accountability”. It had been instigated at the behest of the Inspector-General of the Australian Defence Force (IGADF) examining “rumours… [of] possible breaches of the Laws of Armed Conflict by members of the ADF in Afghanistan between 2005 and 2016”.

Various “unsanctioned and illegal” applications of “violence in operations” entailing a “disregard for human life and dignity” had purportedly taken place. There were “allusions to behaviour and practices involving abuse of drugs and alcohol” peppered with instances of “domestic violence”.

The report by Crompvoets points to “problems deeply embedded in the culture” of the Special Operations Command. The account of one interviewee is studded with suggestion though little detail. “I know there were over the last 15 years some horrendous things. Some just disgraceful things happened in Kabul… very bad news, or just inappropriate behaviour, but it was pretty much kept under wraps.”

A central theme emerges here: ignorance in central command and amongst the civilians at the helm. Unvarnished, necessary, practised, Australia’s national security remains detached from an understanding of its elite, anointed arm which does its best to keep bloody in conditions of utmost secrecy. Such ignorance extends to matters of “mentality” and the logistical makeup of the Special Air Service Regiment itself and the Commandos.

Chris Masters has tailed the culture of the SASR for some time, being himself “embedded” within the organisation in Afghanistan that yielded No Front Line - Australia’s Special Forces at war in Afghanistan. “The long deployment to Afghanistan had worn at the character of some members, who were beginning to act as a law unto themselves.” Such are the ugly disfigurements produced by small, endless wars.

Evidence would be planted on the dead to throw off beady-eyed investigators; detainees would be slaughtered in acts of “competitive killing” to prevent the endless questioning that awaited them back at base. By 2010, the butcher’s bill for Oruzgan province, euphemised by the term EKIA (enemies killed in action) had become so lengthy as to raise eyebrows back amongst the paper shufflers in Kabul.

The report has produced its own precipitate in the form of another inquiry, this time fronted by Australia’s judicial arm. A dozen or so men of the Special Air Service Regiment have been subject to lengthy periods of questioning by New South Wales Supreme Court Justice Paul Brereton.

Concern of this ugliness is tempered with well-seeded praise. “The SAS is in my electorate,” Australian foreign minister Julie Bishop took care to point out, “they are regarded as some of the finest men prepared to put their life on the line in conflict situations to defend us and our freedoms, they are one of the finest fighting forces in the world.”

The opposition minister for defence, Richard Marles, was similarly tiptoeing with a pseudo-psychologist’s hat, wanting a killing force that was doing its bit in accordance with decency. “Our soldiers, particularly our special forces, work in difficult and complex environments. It’s important that we know, as a country, that they’re doing it in a professional and legal way.”

Elite forces trained to liquidate their opponents with ruthlessness do not suggest law book observers and the scrupulous reading of statutes. Their very existence is owed to being unorthodox, to operate outside convention in contempt of local rules and the encumbrances of red tape.

The issue, as ever, is not their operational doctrine so much as the political masters who put them there, inspired by fatuous assessments of what the defence of freedom might look like. The crimes will happen, but the mandate to do so will always come from high and farther afield, those tut tutting types back in the bureaucracy who insist that small wars in vaguely defined theatres are necessary for the national interest.

OccupyGhana welcomes Yao Domelevo back to office
7 hours ago