Speaker Of Parliament Is Not Right On Homosexuality! 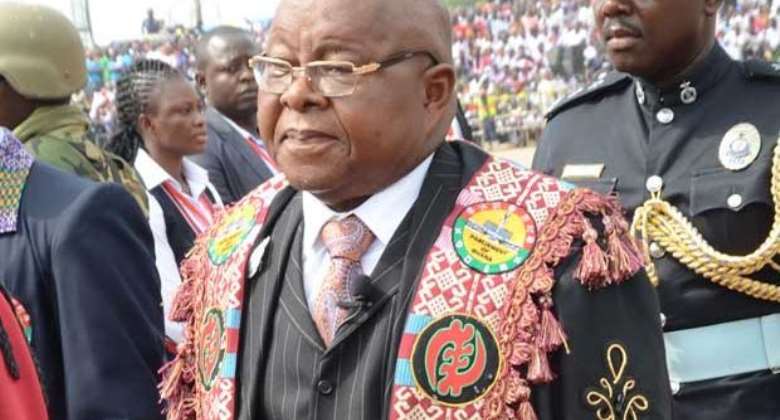 When speaker of parliament of Ghana, Professor Nii Mike Oquaye urged world leaders, especially those of the Global North countries not to call the shots on their African counterparts to legalise homosexuality, he was right. But was he right when he observed that homosexuality is physical, in this case, sexual deformity? And the answer is absolutely no!

Even as he went tangent to declare his intention to resign should the debate on purported legislation of gay rights be brought to parliament for business. He might as well have suggested to the world leaders that: "there are no homosexuals in Ghana"

That would have been ridiculous and put Ghana at the mercy of low regard or perception on the international stage. I cannot say exactly what is the motivation behind the urgent need of Western leaders ratcheted pressure on African leaders to legalise homosexuality but the subject has been with us all these years

With many, most often homophobes dabbling in the debates. Some wrote anti-gay article denouncing homosexuality as society vice or sexual deviance. Even lawyers, among them, Foh Amoaning, all joined the race to apparently nib in the bud any suggestion - let alone - legal enactment that will embrace homosexuality as fundamental sexual liberty or right

The irony though, none has medical background or expertise apt to support their anti-gay, lesbian, for that matter LGBT community rhetoric. Believe me, and with no strings attached to undue provocation and self-flagellation that it is complete velleity, if not ridiculous, to use the holy Bible and Q'uran to puff up argument as to rationale against homosexuality

What we need as benchmark of rationale is internationally recognised medical argumentations as well as proof as basis of measurement. As Theresa May, the British PM and her laisons and our national discourse has ever become warped and lopsided of hate speech woven in fallacies towards LGBT community of Ghanaian society rages, is revelation of how far we are from getting simple things right on national front

Needless to state that Mr. Amoaning, an ardent anti-gay activist and Speaker are embodiment of constitutional principles and rights. Their understandings of section of the constitution which spells out the protection of fundamental human rights would have given them an insight of what homosexuality is about. Our constitution would have stipulated homosexuality as "sexual inclination"

Which, in all intents and purposes is far different from sexual deviance. Deviance is pathology or abnormality. Call it sadism if you wish! Sadism will probably fall under the sexual umbrella of fantasies like necrophilia, bestiality and rituals

Niggle is that the failure of the constitution to embrace LGBT community will be unconstitutional in itself. The echoes of President Nana Addo's statement of "bound to happen" in referral of homosexuality is completely revealing acknowledgement of homosexuality may not be evil and illegal after all

I have no single doubt that Mr. Foh Amoaning, the Speaker and a drove of Ghanaian personalities whose personal opinions (not of experts) are being churned out. I hope a day will come when expert opinions will be sough by interested parties on controversial but critical national issues

And quickly, let us dismiss the Speaker's assessment of homosexuality as deformity, discapacities and even evil as; well, it depends how you look at it. Should Speaker be right on homosexuality, what about a transgender ( a double gender person at a go, or a musculine gender with opposing feminine gender?). The transsexual and bi-sexual or recently viral Facebook bearded-looking man of feminine gender? Is more of a complex issue than mere facilely populist intransigence. And if the Speaker resigns on the debate of homosexuality, as he maintains, is not a justifiable cause to defend

On political front, LGBT is minority and the debate of their protection is largely political not on the truth. If we have to dismiss the President, Nana Addo as pushover due to his economic management approach of begging the world economic powers which actually puts us the mercy of sovereignty infringement, the interview granted by Excellency Uhuru Kenyatta to CNN. He practically acknowledged the protection of the rights of LGBT community in his country. At the same time acknowledging the society's unpreparedness to fully embrace it

When Iranian president, Mahmoud Ahmadinejad, delivered remarks at Columbia University in US on 24th September 2007, the issue of homosexual rights cropped up during Q&A (questions & answers ) section. The now ex Iranian leader was scorned to "death" when he literally rebuffed and rejected the question of existence of LGBT community in his country. The truth of the matter is every country has Lesbians, Gays, Bi-sexual and Transsexuals (LGBT). And is largely rumoured that they abound in the so-called "holy countries"

All studies and indications point to the fact that certain percentage of human beings are born homosexuals. As recently accentuated by Mr. Robert Jackson, US Ambassador to Ghana. And this may well explain why we have LGBT in all countries

As traditionally conservative Ewe, l abhored LGBT but when l learned that their sexual orientation may well be natural endowment, that persistent resentment vanished immediately

The persistent and incessant bashing is worth very little. The irony though, Mr. Oquaye is charged by the constitution to represent all Ghanaians - including gays while Mr. Foh ought to always vy for the welfare of minority in society because his colouring pigmentation makes it moral obligation

Am not the one to call for legalisation or illegalisation of LGBT community in Ghana. But as perceptions and conception are ripe: The kind that unduly send innocent Ghanaians to places like early graves and witch camps, Ghanaians ought to know the truth!