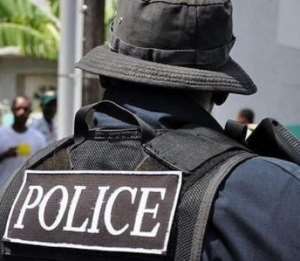 One of the most revered institutions of any country is the military and police service. In Ghana, recent statistics prove that majority of Ghanaians consider police service as the most corrupt ever

Joseph Agbovor the caretaker - influenced by Torgbui Agobodzo - categorically stated that Ghana police is useless institution. He added that, the service is prone to bribery and that he could bribe them to tow his line

Well, whether corrupt or useless, it is the only police service we have. Personally, I cherish the service, hence earning my props and plaudits

Mr. Agbovor admitted before the area commander, Suprt Agyei, that Torgbui Agobodzo acknowledged that indeed, the property belongs to me. He told him to stay there since he had no place to live. I was informed of his presence by himself and Frank Mensah, a step brother. I live in Europe, so anything of such, I only give the nod

Agbovor, summarily replaced former caretaker known as Obolo due to his stocky stature. Despite living in the propert (since 2006 - 2018) without paying a dime, he left after he set fire to the building

It was Moses Justice Aheto Ph.D, a lecturer at University of Ghana who helped secure the property for me three months before I came down and reported the case to police

It is out of absolute sobriety that I dissect and make these pleas. Two police officers accompanied me to "arrest“ those criminals masquerading as family members. The officers simply said, verbally to Rev. Daniel and his wife, accomplices in the scheme, "you are invited to the police station." I was shocked to the marrow when they turned their back and left

I was enjoying the accolade of 'bogga" Since 2002 - 2015 September before this case cropped up. Nobody had ever challenged the ownership of the property till September. 2015. The latest accolade now that they are meddling with my property is "bogga ye loose"

So, it is not only the financial cost being heaped on me but emotional one too. Is pretty sad happening when the institutions can't guarantee that every Ghanaian earn this keep and, of course, keep his earn, is epitome of banana republic with banality in Ghana

"You are invited to the police station" sounds to me like my girlfriend, Emefa inviting me to a cocktail party. But the police, as far as we know in Ghana aren't romantic by approach. Never!

What of, these people now aware of the consequences of illegal destruction of property so chosen not to honor the invitation? Or they know them before? I raised this discrepancy to the police. The police responded that regular police officers can't identify anybody except CIDs and that the CID assigned the case to was off duty

The police further explained to me that in Europe, when the police moves, the CID also moves, that is why we witness instant identification of suspects

You see, when officers deem somebody suspicious, rather in my case, is to identify the person first. It is in the interest of police and safety that identification is compulsory. He or she is mandated by the constitution to do that as an obligation

If during identification he or she realizes that the person he is dealing with is non-violent, then fine but when the suspect is violent and dangerous, then she or he is obliged to call for support because police are considered soft targets because of the nature of their work

Sceptics and detractors will dismiss this as too futuristic. Well, national identification data-wheel is here and until is full-fledged, police must be trained to use psychology to identify citizens. Must be made punishable by law to lie about one's identity to the police

If there is no need to arrest the suspect on spot, police will go back to the station and weigh the possibility of the suspect coming to give his version of the story. If there is, the suspect is called by phone (another form of evidence gathering)

Infact, it has to be on record, so-so-and-so person was called on so-so-and-so date of which he or she did attend or did not. If there isn't need for the suspect to be invited, the case is filed straight to court. The court will now notify the parties when to appear. Of all cases reported to the police go through this process

By then, when we met the police, Joseph Agbovor admitted the property is for me, that it was Torgbui Agobodzo who introduced him to that option. The Kotoka, Torgbui's in-law for that my in-law, admitted before the police knowing Torgbui that was why he demanded Ghcs 40,000.00 as refund of the amount Emmanuel Kornyoh Ansah Dogbe Hegan allegedly took from him for my property

A million police rhetoric or antics: article 9/10 of the constitution clearly outlines who the owner of the property in question is. I have spent from day one possessing the property

Also the original owners registered the property before selling it to me, which can be traced back to lands commission and surveyors department. My documents were merely stolen. The truth of the matter is, I didn't know how to go about it from the beginning because of antics. It was through interaction with lawyers and friends that has made me aware. Several factors delayed the case so far

Despite all of this, police now say the person who registered the property simply directed another person to sell the property to me and that the original owner/s wants substantial amount of money before they will sign for me

That is completely ridiculous if not institutional faux pas : nobody can sell another person's property officially except there is specification to exact so

If you lack stature in morality and principles, you say, "I didn't see any destruction" even though you are the same person, I mean the CID, who directed myself and Doctor Aheto how to take photos of the destruction under her supervision

The destruction and the fact that those claimants tendered fake documents is the criminal aspect of this non-existing issue. That is police aspect of the case. And if the police is reluctant to prosecute them indicates police is accessory to it

Yet the police are pandering, hobnobbing, whining and dining with the criminals despite having all these evidence on their laps. That is why they have gut to destroy more property

When these claimants are seen destroying my property again and again - even after the case has been reported to the police - by the community members or neighbours, it creates a dangerous trend or precedent that can cause community members to lose faith in the police service. Just imagine!

It was Ben Yakanu who taught me bitter lesson during our childhood days, that police, lawyers, surveyors, etc. all flock together and for that can't completely repose 100% faith in them. So it has been with me since

So far, the counterfeit documents which bear the name Nii Tetteh as the original proprietor tendered to police by family sakawa boys is what I know officially from the police nothing more, nothing less. That is why "hire a lawyer" is prominently displaced

To suggest that my lawyer has taken over the case and that she can't do anything prevent demolishers is palpable lie. Of the kind pathological

It is not only pathological, also betrayal of constitutional mandated oath of office she promised to adhere to. The earlier they stand up and adhere to oath, the better it will be for all of us

This is petition for:

OSP not enough to win the fight against corruption — Micheal...
33 minutes ago