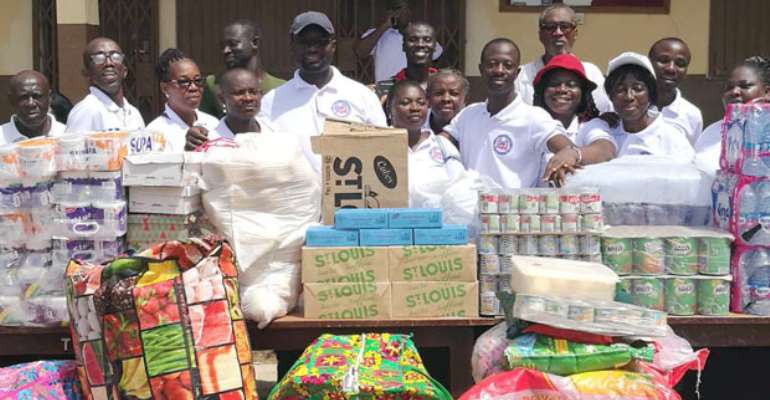 Some of the church members and the items donated

Rev. Fredrick Osei-Nimoh Gyetua, Associate Pastor of the Trinity Presbyterian Church of Ghana, Takoradi, has called on Christians to show love and let their light shine before men.

He noted that Christians were not only obliged to provide spiritual needs of the society but also to assist to improve the wellbeing of the less privileged in society.

He remarked, “As Christians, our common goal is to help change and improve the lives of the abandoned and the destitute in society.

The Reverend Minister made the call when he joined the church members to present some assorted items to the inmates of the Twin City Special School for Mentally Handicapped Children in the Sekondi-Takoradi Metropolis.

The donation formed part of activities marking the 90th anniversary celebration of the church. The members prior to the donation, embarked on a clean-up exercise at the school's compound.

The items, worth GH¢15, 000 included fufu pounding machine; which was at the request of the school, bags of rice, sugar, gallons of cooking oil, detergents, cartons of Milo, tins of milk, loaves of bread and assorted drinks among others.

He said the donation was aimed at providing spiritual, physical and psychological assistance to the inmates and expressed the hope that the presentation would make an impact and enable the inmates to experience the love of God.

He admonished the management and staff of the school to use the items for the purpose of which they were presented.

The Chairman of the 90th Anniversary Committee of the Church, Stephen Peprah-Sekyere indicated that the initiative by the Presbyterian Church, Trinity Congregation, Takoradi was part of its social responsibility and was hopeful that the donation would bring relief to the inmates.

Eric Bruce-Amartey Jnr alias Mantse Bruce II, in charge of Publicity and Publication of the church called on members, particularly those who were currently outside Takoradi to renew their commitment to the church and support its activities financially.

Mrs Crescentia Bilson–Sai, Headmistress of the Special School who received the items, thanked the church for the gesture and called on other public-spirited individuals and organisations to emulate the example of the Presbyterian Church.