Abubakar Atiku And The Rule Of Law 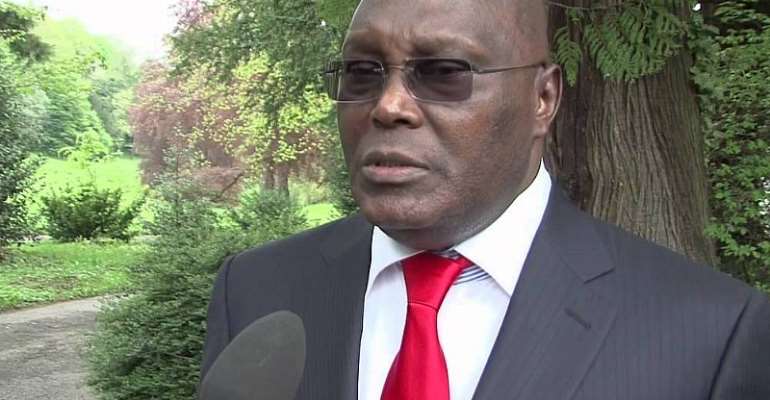 - Meles Zenawi "Two things form the bedrock of any open society - freedom of expression and rule of law. If you don't have those things, you don't have a free country."

- Salman Rushdie True freedom requires the rule of law and justice, and a judicial system in which the rights of some are not secured by the rights of others.

- Jonathan Sacks One of the reasons a lot of things have been out of sync in Nigeria is the lack of respect for the law, especially by the rich and the privileged. They think and act in a manner attesting to their belief that they are above the law. As a result of this, gradually, the country is being turned into a jungle where might has come to be right instead of where right should be mightier. With the rule of law, many excesses of our leaders would have been checked. Our society would have been much better than it is now.

As the Nigerian Vice President, Alhaji Atiku Abubakar had a lot of disagreements with President Olusegun Obásanjó. He instituted fourteen (14) cases against the President and won on all the cases. In all of those disagreements, President Obásanjó came across as a bully who wanted to have his ways regardless of the Constitution, process or respect of and for the Law. The man Atiku refused to be bullied. And he resorted to Courts of Law to resolve the disagreements, majority of which culminated in landmark constitutional decisions by the Supreme Court.

In the introduction to the book "Landmark Constitutional Law Cases In Nigeria 2004 - 2007: The Atiku Abubakar Cases", authored by Maxwell M. Gidado and Chudi N. Ojukwu, it was observed as follows:

"As is traditional, the landmark decisions or judgements by both the Court of Appeal and Supreme Court in these cases have become 'locus classicus' in the 'corpus juris' of our country...... The wide acknowledgement of the value the former Vice President of Nigeria has added to the profession is reflected in the sound decisions by especially the Apex Court of the country."

Hon. Justice Dahiru Musdapher, the former Chief Justice of Nigeria had noted in the Foreword of the book that the former Vice President spearheaded the focus on and the determination of "various thorny issues which cover thought provoking discourse on constitutional democratic governance in Nigeria." Justice Musdapher, on the case that was termed "The Removal Of The Vice President," had written inter alia:

Justice Musdapher also pointed to the issue of "locus classicus" which he characterised as "settled." He noted that through this case known as "Executive Immunity" via "Attorney - General Of The Federation vs. Alhaji Atiku Abubakar," it was clear that the President of Nigeria "cannot withdraw, tamper, or interfere with or violate the immunity conferred on the Vice President of Nigeria by the Constitution nor can he direct his arrest or prosecution." The importance of this is the limiting the possible abuse of power by the President who was out on vendetta. It sets precedence on how a President should view his or her Vice.

Another landmark case determined through the faith of the former Vice President Atiku in the Judiciary was that of "Action Congress (AC) And Atiku Abubakar v. INEC." In this case, titled "Disqualification of Candidates for Election," it was held that INEC as an executive non - judicial agency of government has no power to disqualify any candidate from contesting elections pursuant to the provisions of the Electoral Act, 2006 and the Constitution of the Federal Republic of Nigeria.

As we get ready to take this country back in 2019 and put it on the path to renaissance and rejuvenation, one of the major areas Nigerians have to take into cognisance is the attitude and records of prospective candidates to the Rule of Law. The imperative of this could be found in the impunity of conscienceless acts by many Nigerians in and out of government. These acts are fast pulling this country towards the Hobbesian State of Nature described as "solitary, poor, nasty and brutish."

It is important that we all get committed to the "bedrock of democracy" as Caroline Kennedy described "the rule of law". According to her, the "rule of law" means "we have to have an independent judiciary, judges who can make decisions independent of the political winds that are blowing." To this extent, the efforts to tarnish the credibility of the judiciary by political profiteers should be resisted by all lovers of democracy. If we have corrupt judges, infantile and ridiculous media trials should not be the means to bring them to accountability.

This is why it is important that in 2019, this country must be discriminatory in their choice for Presidency. Justice must be blind to the origin, status, faith and gender of those who seek refuge in its shrines. We cannot afford to continue to live as if this is 15th Century. We have to clean up our acts and chase out from our Government, people with brigandage mentality. We have to begin taking seriously, violation of Court orders, disrespect of judges, the judicial process and the entire judiciary as an arm of Government.

The inability for many to get justice from our system has encouraged the resort to violence and the anarchy in which our polity has been enmeshed. The President has been the violator - in - chief of Court orders. He was even alleged to have attempted bribing a sitting Judge in order to influence a case in his own favour. If the President does not have faith in the justice system, why should we blame ordinary citizen in the society?

This is why the former Vice President Atiku Abubakar represents this hope for a society that is respectful of Laws. Atiku represents the aspiration of our society where the most powerful and weakest as well as the vulnerable would be confident of not being shortchanged. Atiku represents, through his own personal example, that the Judiciary could be trusted to do the right thing for a citizen, especially when the odds are stacked against you. He practices what he preaches. He believes that some of the times, the privileged could be at a serious disadvantage and if there was no strong adherence to the rule of law, it could lead to a lot of things that could threaten the peace, order, progress and the well being of the society.

The inability of the cross section of Nigerians to obtain or have access to justice and fairness from the Judiciary has exacerbated the increasing violence in our polity. The bad examples of leaders who disobeyed Court orders have reinforced the common belief among the critical mass that it is pointless to seek remedy through the Courts. Nigeria at this point needs a leader that could elicit a resurgent trust, confidence and belief in the efficacy of our judicial system and restore law and order. The former Vice President, Alhaji Atiku Abubakar is the man that could make this happen.

He believes that both the poor and the rich, the strong and the weak, the powerful and the powerless, the rulers and the ruled should have the same stake in our justice system through their faith, trust, commitment to and confidence in our justice system. He is and has been an exemplary connoisseur of the supremacy of Law in any society that seeks orderliness and protection of and for all, regardless of the status. I hate to wax religious by using words that could suggest an extra celestial quality about the former Vice President, but it is more imperative that we avoid the mistakes of the past during which we failed to examine rigorously, the trajectory of the persons seeking to pilot the Nigerian ship.

"Anywhere, anytime ordinary people are given the chance to choose, the choice is the same: freedom, not tyranny; democracy, not dictatorship; the rule of law, not the rule of the secret police," Tony Blair, former British Prime Minister once noted. Alhaji Abubakar Atiku is an exemplary hope for the rule of law in Nigeria.