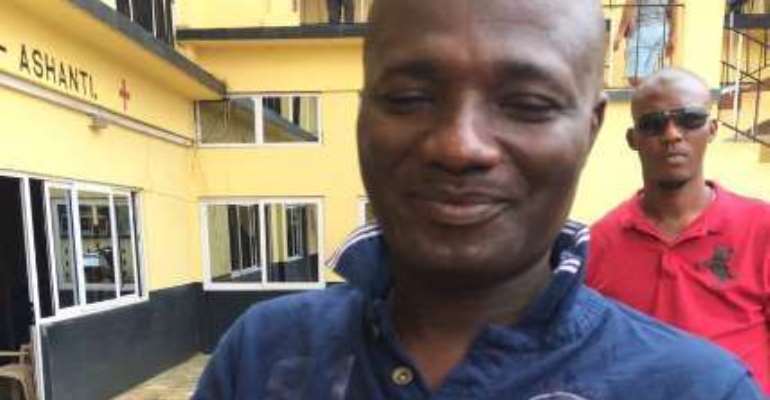 Embattled National Democratic Congress (NDC) activist and a serial caller, Appiah Stadium has been released on police inquiry bail after his arrest for allegedly defaming the President Nana Akufo-Addo.

He was arrested for suggesting, in a recent audio that went viral, that the President Akufo-Addo smoked marijuana.

Appiah Stadium was subsequently handcuffed and transported to the Headquarters of the Criminal Investigations Department (CID) in Accra to answer questions concerning his claims.

The development aroused public debate over whether or not the police was acting according to law.

A former minister of state under Mahama administration, Rashid Pelpuo, suggested that the arrest was politically motivated.

He said the manner in which the arrest was effected, and how the opposition NDC activist was treated pointed towards some political undertones.

NDC members stand down
Members of the NDC in the Ashanti Region were demanding his immediate release and gave the government a 24-hour ultimatum.

But after the bail was granted, the NDC members withdrew their ultimatum.

The government has also said President Akufo-Addo will not press charges against the NDC communicator.

The Minister for Information, Mustapha Hamid, in a release copied to citifmonline.com, indicated that Akufo-Addo has informed the Police Administration of his position on the matter.

The statement said President Akufo-Addo was convinced that “right-thinking Ghanaians recognize that Appiah Stadium is merely reciting from an NDC propaganda book, which has since been discredited.”

This issue was brought to the for in February 2015 following a series of publications in pro-NDC newspapers making similar claims.

Lawyers for then Nana Akufo-Addo took these newspapers; The Al-Hajj, Enquirer, Informer, Ghanaian Lens and the Daily Post to the National Media Commission (NMC) to afford them the opportunity to substantiate their claims.

They failed to do so, following which the NMC asked them to retract and apologize.