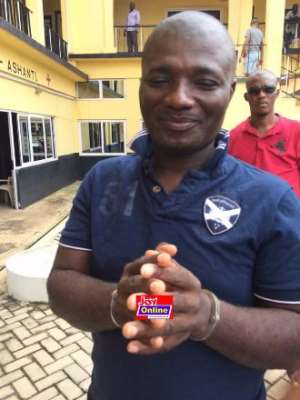 The Ashanti Regional Youth wing of the opposition National Democratic Congress (NDC) has called for the immediate release of Appiah Stadium, a popular serial caller affiliated to the party.

Appiah Stadium was arrested on Tuesday, September 26 by the Ashanti Regional Police to substantiate an allegation he has levelled against Nana Addo Dankwa Akufo-Addo.

ASP Juliana Obeng, the Police PRO in the region said he was arrested on Tuesday following orders from their national headquarters in Accra.

“We got instruction from the national headquarters to help them with the arrest of Appiah Stadium and that is exactly what we have done. As I speak to you, Appiah Stadium is on his way to the National CID Headquarters. When we arrested him, we immediately put him in a car, off to Accra,” she said.

However, a statement signed by NDC Ashanti Regional Youth Organiser, Brogya Genfi, said the party demands the immediate release of Appiah Stadium from police custody, “in the interest of the stability of the state.”

Read the full statement below
NATIONAL DEMOCRATIC CONGRESS
YOUTH WING
ASHANTI REGION
September 26, 2017 - 9pm
Re: FREE APPIAH STADIUM NOW!!!
We wish to inform the general public of the release of Appiah Stadium from Police custody this evening at about 8:30 pm.

We will, therefore, like to back-down on our earlier 24hours ultimatum given to the Akufo-Addo led government for the release of Appiah Stadium.

We also call for calm within our ranks, as we continue to monitor the situation.

Let us, however, re-state our resolve to fight against the shameful intimidation tactics of the government. We shall resist any attempt by this government to criminalize and suppress FREE SPEECH.

We call on all Ghanaians to champion the need for the respect of the fundamental human rights and freedoms of all Ghanaians irrespective of their political color.

Finally, we would like to thank all concerned NDC members, the media and the General Ghanaian public for the support shown us.