‘I Agree With Speaker: Nkrumah Is Not Founder Of Ghana’ 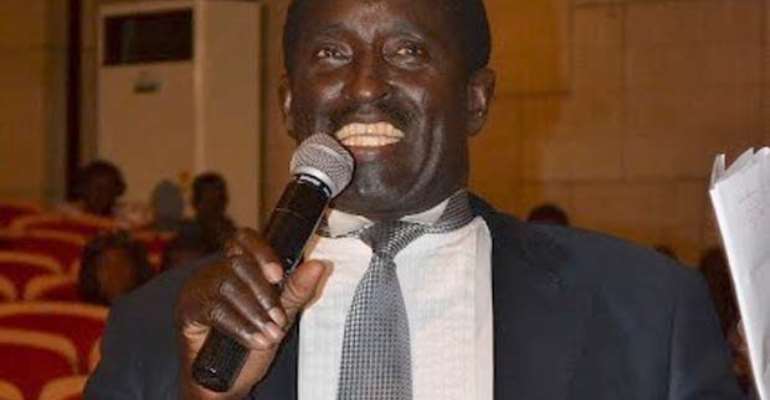 Professor Aaron Mike Oquaye, Speaker of Parliament, is NOT a historian. He is a diplomat, having served as Ghana's High Commissioner to India under President Kufour. He is a politician having represented the Dome Kwabenya Constituency for NPP for two terms, and he is in academia, a political scientist, having published a book: “Politics in Ghana.” He earned his “Professorship” by lecturing in Political Science in the University.

Speaking at a lecture in Accra, the Speaker released a bombshell when he declared that “Even though I have great respect for Dr. Nkrumah, the truth is that he is not the Founder of Ghana”

I agree fully with him. Who is a founder?
A founder is somebody who, on his own initiative, forms an idea and takes steps to bring that idea into reality. If I sit in my house at Kasoa and I decide to bring people around me to declare the formation of a new political party, I will be called the founder of that party.

I remember in 1979, Colonel Frank George Bernasko, a very popular former Commissioner of Agriculture under Colonel IK Acheampong, announced the formation of the “Action Congress Party” – he was the Founder of ACP.

Or, unable to stand or contain the internal intrigues of the CPP but determined to be a presidential candidate at all costs, Dr Paa Kwesi Nduom angrily abandoned the CPP and declared the birth of his own political party, the PPP – he is the founder of PPP.

Can the same be said of Nkrumah and Ghana?
By the time Nkrumah was being born, in 1909, at Nkroful, by his mother, Nyaniba, truly there was no Ghana as such, but, by courtesy of the Berlin Conference and the Scramble for Africa, the British had effectively drawn the map of Gold Coast to include the Western Province, the Central Province, the Eastern Province, called “The Colony,” then Ashanti, having through the Yaa Asantewaa War forcefully deported the Asantehene, Prempeh I, into exile in Seychelles and then the “Northern Protectorate.”

The colonial authorities, according to Governor Alan Burns, were not ready to give independence at all for the next hundred years.

Brigadier General Gordon Guggisberg, a surveyor, was appointed Governor of the Gold Coast in the early 1920s. As a Governor, he opened Achimota College, he built Korle-Bu Hospital; he built a vast extensive network of rail lines and a sea port at Takoradi. He tried to develop the Gold Coast colony.

His masters in London said, “What is this god dammed soldier doing? Instead of ensuring that he deepens the extortionate policies of every colonizer, he is rather developing the colony, building local intelligentsia (through Achimota) and middle class.” So Guggisberg was SACKED and recalled to London where he died in an old people's home as a pauper, and was buried in an unmarked grave.

A certain brave local boy, Kojo Thompson, rose up and declared that the legal basis for the presence of the British at the coast was the Bond of 1844 signed by the Fante Confederacy and the British on 6th March, 1844, which was for 100 years. Therefore, the colonizer should hand over and leave by 6th March, 1944.

Do you know what happened to him? He DISAPPEARED.
Yes. He disappeared. Whether he was killed, tortured, drowned, or what, Kojo Thompson, leader of the call for the end of the Bond of 1844, simply DISAPPEARED.

But the seed sown by Governor Guggisberg was yielding fruit. On 4th August, 1947, several patriotic men from the Gold Coast Colony met at the seaside town of SALTPOND and the subject of their meeting was that “must we continue to be a COLONY to serve the British?”

But look at these big men – they were each individually self-made men, leading very comfortable lives, travelling by sea to London at will, treating their struggle with patience.

Dr. Ako Adjei told them there is this organizer I knew back in London. Let us invite him to come and be our legwork organizer. So Kwame Nkrumah was invited, he came, took up the post of secretary of UGCC and soon found himself in difficulties with his employers.

Nkrumah found his meetings with these lawyers as elitist, and surrounded himself with semi illiterate verandah boys – Krobo Edusie, K A Gbabemah and others – and soon on 12th July, 1949, he stole the UGCC national platform to announce the birth of “CONVENTION PEOPLE'S PARTY” – a party of the UGCC people.

He was released from prison and appointed Leader of Government Business in 1951. Independence was granted on 6th March, 1957 and we became a Republic on 1st July, 1960.

At the lecture in Accra, Professor Oquaye compared Paul to Kwame Nkrumah – he was right. St Paul was not part of the twelve disciples who had last supper with Christ, but, after his conversion, he literally became the principal torch bearer of the Christian religion. Nevertheless, it was Peter, not Paul, who succeeded Jesus Christ as Head of the Church.

In similar vein, Kwame Nkrumah did a lot for the Independence Struggle, and the building of modern Ghana, but truth and in fact, he did NOT found Ghana, as a nation state.

I was born in far away Jinjini, then a village ten kilometers outside Berekum. I never saw Kwame Nkrumah as a person, but in elementary school, on every 21st September of the year, there will be Founder's Day, plenty of parades, speeches, cultural displays and what nots. As a growing child, I always looked forward to another Founder's Day.

The coup makers of 1966 abolished this false day in our national calendar, but President Evans Atta Mills, a product of Kwame Nkrumah Institute of Ideology, reinstated 21st September as Founder's Day, to honour Kwame Nkrumah.

Of course, reader, Kwame Nkrumah deserves more honours than most, if not all our previous leaders. He built roads and highways, including Tema Motorway; he built three universities, and opened countless secondary schools. He introduced compulsory fee-free universal primary education (I am a proud beneficiary). He opened GIHOC with 171 industries; he opened Tema Harbour, Akosombo Dam. Call Kwame Nkrumah “OYEEMAN” (he built a nation) and that will be most accurate, but, to say he is the “founder of Ghana” – no! That will be a shameless corruption of truth.

I agree with the Speaker of Parliament: Kwame Nkrumah is a true hero, but NOT the Founder of Ghana.