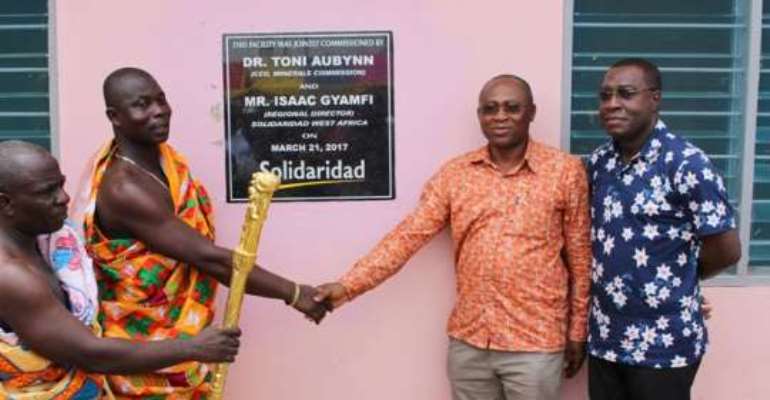 By Kwamina Tandoh, GNA
Ekorso (E/R) March 22, GNA - Solidaridad, an international Civil Society Organisation, has built a Community Health Planning Service (CHPS) compound to address the basic health needs of the people of Ekorso, a mining and farming community in the Atiwa District.

The facility, funded under the project dubbed: 'Solidaridad's Partnering for Better Livelihoods in the Gold Supply Chain, would now save the 2,000 plus residents from journeying to Obosuo, a distance of five kilometres for their healthcare services.

The Ekorso CHPS zone valued at GH¢204,881, has a dispensary, maternity unit, Out Patient Department, as well as accommodation for two health personnel, who would critical offer services.

The services include home visits, outreaches, vaccinations and health education. Neighbouring communities such as Akyem Mampong in the Eastern Region would also benefit from the facility.

The CHPS Compound project was undertaken with the support of the Atiwa District in the Eastern Region, the Regional Health Directorate of the Ghana Health Service and the Key Empire Mining Company, a small-scale mine located in Ekorso.

Mr Isaac Gyamfi, the Regional Director of Solidaridad, West Africa, explained that the Partnering for Better Livelihoods in the Gold Supply Chain Project started three years ago with the overall objective to improve the livelihood of small-scale miners and their communities.

Akyem Mampong, also in the Atiwa District, as well as a community to be selected in the Atwima Mponua District in the Ashanti Region, are other beneficiaries of the project, which would end this year.

Mr Gyamfi said the project had increased the earnings of small scale miners because of improved management and production activities, while the women had a better position for economic employment.

Additionally, the volume of gold produced by the miners in a responsible manner had increased and could be traced and made available to buyers.

The communities had become better aware of health issues too, he said.

Ms Augustina Nartey, the Eastern Regional CHPS Coordinator, said a total of 614 CHPS were functional in the Eastern Region as at December 2016, explaining that; 'We have a mission to construct 10 CHPS every year and this year, two have been commissioned; at Lower Manya and now at Atiwa'.

She expressed gratitude to Solidaridad and appealed to non-governmental organisations, philanthropists and corporate institutions to help the GHS and the district assemblies to put up more CHPS to improve healthcare.

In a message, Mr Kwasi Amoako Attah, the Member of Parliament for Atiwa West Constituency and Minister of Roads and Highways, pledged to support the facility with all the necessary apparatus needed for its smooth operation.

Baffour Frimpong Tenkorang III, Omanhene of Akyem Ekorso, who received the facility on behalf of the community members, commended Solidaridad for the facility, saying health care had been brought to their doorsteps to save them from preventable deaths.