Suhuyini Apologises To Vetting Committee Chair For Loosing His Temper 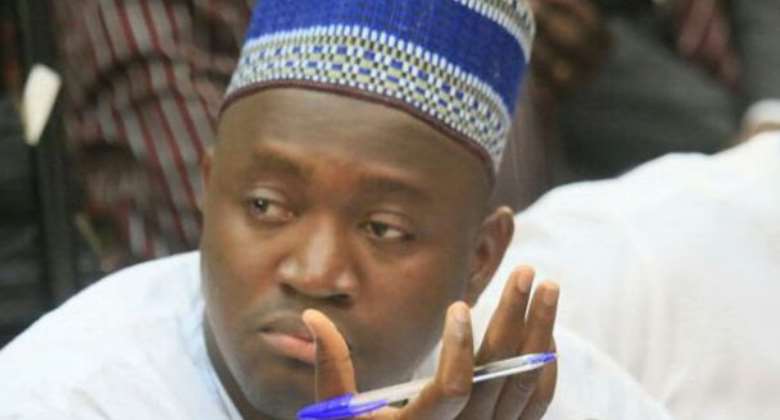 Member of Parliament for Tamale North Alhassan Suhuyini has apolosised to Joe Osei Owusu, chair of the Appointment Committee of Parliament for losing his temper during the vetting of the Energy Minister designate Boakye Agyarko, Monday.

The former host of Radio Gold’s Alhaji and Alhaji took the opportunity to build bridges with the chair of the committee after yesterday’s heated encounter which forced the chair to deny him the right to ask a follow up question.

He had been overruled by the chair of the committee for seeking to find out from the nominee whether he played a role in a criminal conduct at the Bank of New York which saw ten officials of the bank being prosecuted in 2007.

In the opinion of the Chairman of the Committee, Alhassan Suhuyini breached sections of the Standing Order and therefore overruled the second part of the question.

The MP after giving a backgroud of the fraud that led to the prosecution of ten officials of the bank, demanded the nominee to furnish the Committee with details of his employment, what he did whilst working at the Bank of New York, when and why he resigned from the Bank.

He also wanted the nominee to assure the House that at no point was he a part of the fraudulent deal.

Boakye Agyarko in his response said the fraud and prosecution happened in the London branch of Bank of New York and not the branch which he was engaged as Vice President.

He found it rather weird that he would be asked to prove his innocence of a crime he was never convicted of, a crime which never happened in the Bank of New York (USA).

The chair of the committee together with the Majority Leader Osei Kyei Mensah Bonsu suggested to Alhassan Suhuyini that the framing of his question was in breach of procedure and must be careful in proceeding in that direction.

The chair cited Standing Order 67 of Parliament which states that “questions asked shall not contain any argument, expression of opinions, inferences, imputation, controversial, ironical or offensive expression or hypothetical statement” and asked the MP to proceed cautiously.

But the Tamale North MP proceeded with his line of questioning and later accused the chair of the committee of being unfair to him.

The Chair of the Committee in reaction, took away the right of the nominee to ask a follow up question and turned to other members to vet the nominee.

That encounter has been a major debate especially on social media with members of the general public hailing and cursing both Suhuyini and Osei Owusu in equal measure.

On Tuesday, Minority Chief Whip Muntaka Mubarak in a surprise move told Joy FM the Tamale North MP who is a member of the Minority bench, breached procedures and defended the action taken by the Chair of the Committee.

In a reconciliatory mood, Alhassan Suhuyini, prior to the vetting the Education Minister designate Mathew Opoku Prempeh, apologised to the  chair of the Committee for losing his temper in heated vetting session of Boakye Agyarko.

Residents of Settlement unhappy over destruction of road in ...
32 minutes ago