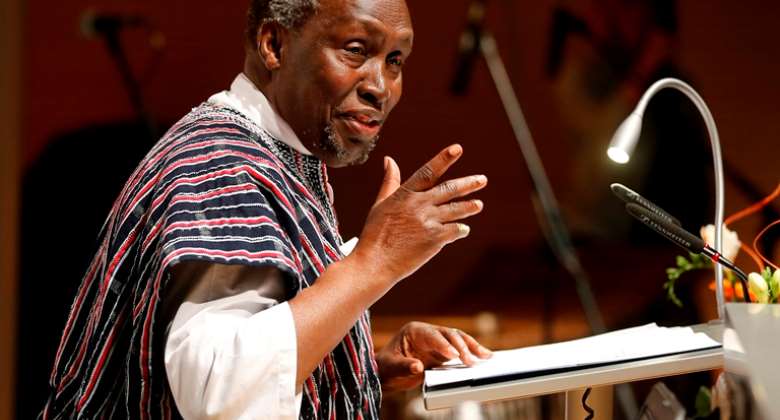 In seven chapters, Ngugi wa Thiong’o touches on a wide-range of issues, from the impact of slavery to colonialism and neocolonialism, from nuclear disarmament to the lopsided distribution of power within the global system, and from indigenous African languages to the future of the continent. This book could be described as a critical appraisal of the state of our globe and Africa’s place in it.

The overarching theme of this book is the urgent call for the unification of the African continent. While there were many, including Ghana’s legendary Kwame Nkrumah, whose attempt to promote the concept was stymied by the conspiratorial historical and ideological forces, in this audacious work, wa Thiong’o reechoes the call with strident urgency. Anchored on critical appraisal of Africa’s contact with Europe and the world, the author believes that it is only unification that can bring about Africa’s visibility in a world that has evolved into powerful political and economic blocs.

Opening with the representation of the continent and its people in global media flows, this book indicts the West for its unremitting negative portrayals of the African experience through such pejorative terms as tribe, tribalism, tribalistic (and their companions: the “Dark Continent” and “primitive”). In line with its critical objective, the book argues that the employment of these terminologies “fail to illuminate modern developments of the continent” (p. 7). wa Thiong’o, like Wole Soyinka, traces this development back to the anthropological “fodder on which, in the main, the European mind of the late eighteenth, nineteenth, and twentieth centuries were fed, a conditioning that has extended to its progeny till today” (Soyinka, 2012, p. 26). The author mocks the purveyors of this media frames as people who leave all reason at the door when dealing with African issues, so their narratives can fit the historical template.

While Ngugi tend to be addressing those in the image factory, it should be of note that the academy is not excluded from the practice. As recently as 2013, Anne Neville Miller and her coauthors, in an article for the International and Intercultural Journal titled: Still the Dark Continent: A content analysis of research about Africa and by African Scholars in 18 major communication-related journals, reenacted the template.

The crux of their argument is that out of 5,228 articles they sampled from 18 top communication journals between 2004 and 2010, only 25 of them were authored by researchers from African institutions. Therefore, to Miller and co, Joseph Conrad’s Nineteenth Century representation was not only accurate, but it is still the contemporary reality of the continent.

This willful self-indulgence that fails to account for the contextual struggles of the continent, concealing its truthful apprehension is what worries wa Thiong’o. For Soyinka, this darkness that is so readily attributed to the continent only proves to be nothing but the willful cataract in the eyes of its external beholders (Soyinka, 2012).

Still on Africa, the author unpacks the effects of the divisive colonial demarcations—the North and South Saharan, the Europhone zones (Franco, Anglo), and the LusoHispa zone—on the organic structure of the continent and calls for new measures towards the unification of the continent. In his view, it is only the long sought unification that will deliver an intra-African common market with intra-African communications, connecting village to village, town to town, and region to region. He audaciously call for the transformation of all the national boundaries into highways that will bring the continent together.

Closely tied to the call for the unification of the continent is the invitation to African intellectuals to return to their indigenous languages as vital conduits for reaching their base, the masses (in order to place their intellectual production at their disposal), whence visibility and respect derives. Using the notion of trickledown effects, as understood in economics, the author evokes images whereby knowledge simply trickles down to Africans because much of even what African intellectuals produce are in the language of the colonists.

For wa Thiong’o, if memory is rooted in language, through which reality is constructed, then African intellectuals are doggedly locked in the reality and memory of Europeans and their knowledge of Africa is filtered through European languages. wa Thiong’o warns that Africa cannot attain its visibility through the language of others; it can only become more invisible. For those who view the multiplicity of African languages as a drawback and question their capability to support complex social thought, wa Thiong’o provides a historical map to the development of European languages to underscore the fact that those languages also faced similar questions on their journey to global prominence.

With regard to nuclear disarmament, wa Thiong’o reminds the world that only Africa has the moral right to press for this agenda. The voluntary nuclear disarmament of Libya and South Africa provides a high moral ground for the author to advance this position. Accusing the West of deception, the author specifically uses Libya as a case where its leader demonstrated goodwill by giving up nuclear weapons only to be invaded by a nuclear-armed NATO as its reward for compliance.

Continuing in line with its critical orientation, this book draws attention to the widening global inequality that is enslaving the global south and enriching the global north, especially Western Europe and the US, who control over 90 per cent of the world’s resources. wa Thiong’o finds these disparities even within countries in the global north and establishes a strong link between slavery and current levels of poverty among descendants of slaves in the global north.

The book places these inequalities in a historical perspective, providing inextricable links that reveal dominant-subjugated relationships between the West and Africa at each phase of their encounter—the mercantile, slavery; the industrial, colonialism; and finance; neocolonialism. It, then, condemns the UN, the IMF, the World Bank, and the WTO as ideological institutions structured to promote, if not impose, neoliberal policies on the developing world irrespective of each country’s economic experiences. The book calls this capitalist fundamentalism for its shared similarities with religious fundamentalism, which professes only one way to reaching the ultimate reality.

This book does not only add to the fodder of literature in the area of global relations, it is a timely intervention that challenges the status quo and calls attention to alternatives in resetting global relations. But as is mostly the case, those who act on behalf of our nations in Africa are not necessarily the ones who read these materials. If only they would, they might be inspired to act—a stitch in time can save nine.

Ramirez. 2013. Still the Dark Continent:A critical analysis of research about Africa and

by African scholars in 18-major communication-related journals. International and