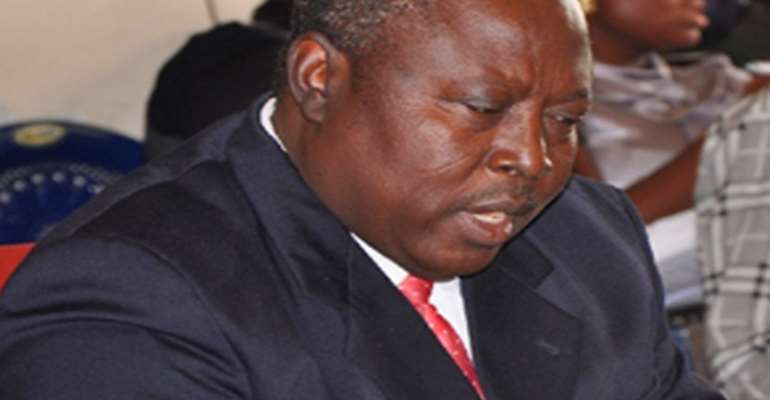 Martin Amidu has parried off allegations of lies against him by Communication Minister, Edward Omane Boamah, regarding a Supreme Court ruling on the Woyome judgement debt case.

According to Martin Amidu, contrary to what the Communication Minister says, he has never been “a damn big liar” in the action he commenced in the Supreme Court on 22nd June 2012 at the Supreme Court to retrieve some 51 million judgement debt fraudulently paid to businessman, Alfred Woyome.

“The drunken tantrums cowardly thrown by Omane Boamah shows the shallowness of his education, understanding, and lack of diligence and industry in researching matters he is to defend the Government on in public.

“Simple common sense would have informed the almighty Minister of Communications who sought to take over Multi TV/Joy FM to insult me that in arguing my case before the Supreme Court on 10th November 2016 I referred the Court to its own unanimous decision given in my favour on 29th July 2014,” Mr Amidu said in opinion piece released Monday.

Omane Boamah! The Supreme Court unanimously declared Lithur-Brew's Austro-Invest Limited as joint looters with Woyome not Amidu: By Martin A. B. K. Amidu

I have never been a “damn big liar” in the action I commenced in the Supreme Court on 22nd June 2012 in the case of Martin Alamisi Amidu v (1) Attorney General (2) Waterville Holding Company Limited (BVI) (3) Austro-Invest Management Services Limited, and (4) Alfred Agbesi Woyome or in any application I have made to the Court in connection with that case as Edward Omane Boamah, the Minister of Communications, is reported by 3 news.com on Ghana Web to have charged me with on Multi TV/Joy FM's news analysis programme, Newsfile on Saturday 12th November 2016.

The substantive case concluded on 29th July 2014 and all I have sought to do is to ensure that the orders of the Court to Woyome to refund the whopping GHC51.2million is obeyed timeously as mandated by Article 2 of the 1992 Constitution. It does no credit to the Government which created, looted and shared the unconstitutional payment with Woyome to send its Minister of Communications and other junior Ministers to attack my character and person.

My application dated 4th November 2016 for leave to examine on oath Mr. Woyome as to his means and property to satisfy the judgment debt was heard on 10th November 2016. The case was adjourned for ruling to 15th November 2016 with an admonishing to the parties not to comment further on the case. The Government does not demonstrate any respect for the rule of law and the independence of the judiciary, particularly of the Supreme Court, when the Government unleashes its Communications Minister to charge me with being a “damned big liar” and demand that I purge myself of my lies on a live TV/ radio show, as reported.

Edward Omane Boamah's major charge against me is that I told “the courts that the current Attorney General Mrs. Marietta Brew Appiah-Opong's firm, Lithur-Brew and co-represented Austro-Invest, a company he claimed benefitted from the GHC51.2million wrongly paid to Woyome.”

The cabinet Minister is reported to have insisted that: “Mr. Amidu lied when he claimed that the Attorney General's firm was on the side of Mr. Woyome when in fact the firm was rather against Woyome.” The riotous Minister is said to have demanded, pestering the host of the show to “Get Martin Amidu to speak to his lies”, -“insisting that the 'truth is being sacrificed'with the host's show of disinterest in allowing the Communications Minister to direct how the show should be run”. The conduct of the Government's Communications Minister confirms the Government's impunity and abuse of power in acting unconstitutionally to control the content of even private media houses such as Multi TV/Joy FM.

The drunken tantrums cowardly thrown by Omane Boamah shows the shallowness of his education, understanding, and lack of diligence and industry in researching matters he is to defend the Government on in public. Simple common sense would have informed the almighty Minister of Communications who sought to take over Multi TV/Joy FM to insult me that in arguing my case before the Supreme Court on 10th November 2016 I referred the Court to its own unanimous decision given in my favour on 29th July 2014.

The Supreme Court made three declarations and one order in my favour. The first is: “1. A declaration that the Honourable Attorney General, the 1st Defendant Respondent, in this case in paying or ordering the payment by the Republic of Ghana of claims by the 3rd Defendant and Austro-Invest, …is inconsistent with and in contravention of Article 181(5) of the 1992 Constitution…and are according declared null, void and without effect whatsoever.   The third declaration is: “3. A declaration that the conduct of the 3rd Respondent, therein Plaintiff, jointly with Austro-Invest management limited in making claims upon and including the issuance of a writ of summons with the support of 2nd defendant therein and receiving payment premised upon the breaches…is in consistent with and in contravention of Article 181 (5) of the Constitution.” I am attaching herewith a PDF of a certified true copy of  the entire decision of the Court dated 29th July 2014 for ease of reference by doubting Thomases like the Government's lazy or unread Communication's Minister. Truth can never be silenced!

The Austro-Invest referred to in declarations 1 and 3 as acting jointly with Woyome, and the Attorney General to have created, looted and shared the GHC51.2million from the public purse is the very Austro-Invest which Marietta Brew Appiah-Opong, the current Attorney-General (appointed in early 2013) admits her firm of Lithur-Brew and Co acted for against Woyome after the loot was paid to Austro-Invest and Woyome. The declarations of the Supreme Court are clear that the loot was procured jointly by Woyome and Austro-Invest Management Services Limited whom the Communication Minister admits was Lithur-Brew and Co.'s client. The GHC51.2million loot ordered by the Court to be refunded was money, which according to declaration 3 was paid to Woyome and Austro-Invest jointly, and which the Government and the current Attorney General from Lithur-Brew and Co have refused or failed to retrieve for the public purse for such a long time.

This is why it is not fair to call me a bad name and hang me without referring to the declaration granted by the Court and the situation in which the Government and the current Attorney General from Lithur-Brew and Co now find themselves. The indefensible aspect of the Austro-Invest case is that at the time Lithur-Brew and Co went to the High Court after the payment of the loot jointly to Woyome and Austro-Invest to ask for a share of the loot from Woyome, they were purporting to act for a company which had ceased to exist to their knowledge, unless they were grossly negligent as lawyers. It is of no moment to me whether they acted directly for Woyome or indirectly or for Austro-Invests' share of the joint loot from Woyome.  This matter was exhaustively dealt with last year on my website, martinamidu.com, and in the media with the supporting evidence of the pleadings filed on Austro-Invest's behalf by Lithur-Brew and Co.

I relied on the unanimous decision of the Supreme Court dated 29th July 2014 making two declarations against Woyome and Austro-Invest, the client of Lithur-Brew and Co in my arguments to the Court on 10th November 2016 and nobody should jump the gun by calling me “a big damn liar” and perjurer while the case is pending. I am constrained from making any further comment on the case apart from calling the public's attention to the final decision of the Supreme Court, a public record, in respect of Austro-Invest Management Services Limited which is admitted to have been the client of Lithur-Brew and Co, the firm of the current Attorney General. No lies!

[Hot Video] Shatta Wale vim dies as prisoners hoot at him in...
14 minutes ago