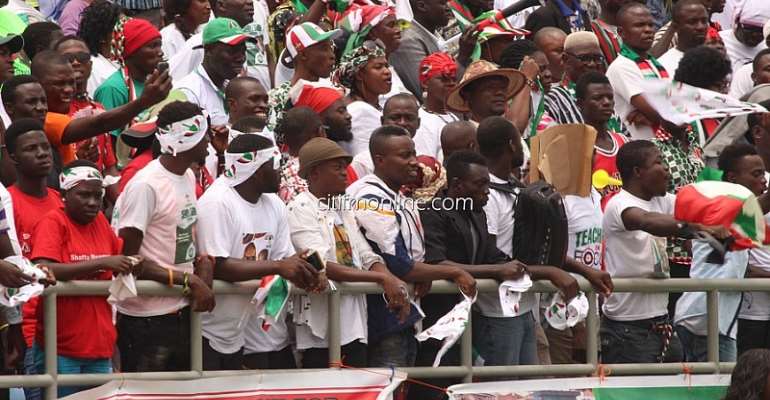 Some members of the governing National Democratic Congress (NDC), want their party's manifesto to have a blueprint for tackling the unemployment rate in the country.

The NDC will today [ Saturday], launch its manifesto ahead of the 2016 election in Sunyani in the Brong Ahafo Region.

Some of the supporters told Citi News' Kojo Agyeman at the coronation park, that they expect the manifesto to touch on improving the lives and welfare of Ghanaians in all sectors including health.

“As a party, we can see that job creation is one of the strongest demands of the citizenry of Ghana, number two is healthcare and standard of living. So with the manifesto, I'm expecting that the policies and programmes in the manifesto would create huge avenues for a lot of jobs to be created for the youth,” Enyo an NDC supporter said.

Sunyani Coronation Park
Another member, Alhassan Ubatu, also said she expects to have more floating voters as well as members from opposition parties join the NDC after it unveils its good policies in the manifesto.

“By the end of this manifesto launch, we expect to win more souls for this party to vote for John Mahama. We are winning this December election,” she added.

Flagbearer of the NDC, President John Dramani Mahama, earlier this week presented highlights of the manifesto which he said hinges on four thematic areas.

The party says it expects around 50, 000 people to attend the manifesto launch.

President Mahama is seeking a second term and is facing stiff competition from flagbearer of the opposition New Patriotic Party, Nana Akufo-Addo, who is trying the presidency for the third time.

NDC copied our policies
Akufo-Addo and the NPP have accused President Mahama of copying some of their policies.

But President Mahama has rejected that claim saying their manifesto ideas are original.

“They [NPP] say the will produce it on October 8, that gives them enough time to copy as many things in our manifesto as possible. And so they are free, the ideas are there we have the ideas, we've been governing this country, we are running the programmes, we know where we've come from, we know where we are going. And so we have the ideas to make this country better and we will continue to do the work to move this country to a new pedestal and I'm certain we will win this election and that by 2021 when I leave office, we would have made Ghana one of the model countries in West Africa and Ghana will be the envy of our sub-region,” Mahama added.